Former Miss USA Rima Fakih was jailed Saturday morning for drunk driving. When news got out, she lied about it on her Twitter page, claiming that some other "Fakih" had been arrested. Her lawyer later confirmed that Rima was indeed arrested. 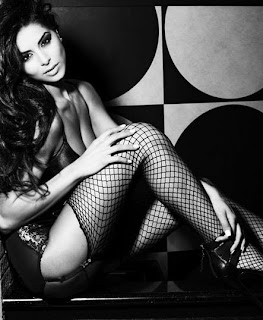 I can't say I care much about what Rima does in her free time, apart from when it poses a threat to everyone on the road. (Young people do dumb things; let's hope she learns her lesson and doesn't do it again.) However, we should all be paying careful attention to the "Muslims" the media pushes on us as "proof" that Islam is peaceful. Islam commands Muslims to violently subjugate non-Muslims, to establish Sharia as much as possible, not to be friends with Jews or Christians, etc. Yet whenever we raise these points about Islamic teachings, the media responds by parading people like Rima Fakih before us. The message we're supposed to take away is that Islam can't possibly call for violence or intolerance, because there are so many peaceful and tolerant Muslims. So what happens when it becomes glaringly obvious that Muslims like Rima don't take Islam seriously at all? Can we now examine Islam's teachings without the silly parade response?

Sources say she blew a .20, which is more than twice Michigan’s legal limit. She spent most of Saturday in jail.

On her Twitter and Facebook accounts, Fakih claimed throughout most of the day that she was out of state and that it was a different Fakih.

Those posts have since disappeared.

Fakih’s attorney says Rima was pulled over and had been driving with a friend to another friend’s house.

Fakih is said to be very upset and wants to apologize to her fans. (Source)

Let's face it. This chick is about as muslim as I am. First of all, she's a shiite. And secondly, she's hardly "muslim" in any sense of the word. I remember reading about this so-called "muslim" miss usa. There were pics of this girl doing strip shows and partying and modelling. All leading up to the pageant.

Anyone remotely devout wouldn't be doing half the things she does.

"Let's face it. This chick is about as muslim as I am."

Well most Muslims raised in the U.S. are more secular than they are religions, IMO. They use Islam as a association to their family, heritage and culture. It's more of a status than a statement of faith in many ways, IMO. Just look that the show "All American Muslims". Those women are not really practicing Muslims but have the religious wrappings most likely handed down to them by family, especially the mom and dad.

Why would that matter?

"And secondly, she's hardly "muslim" in any sense of the word."

That is why we don't have to worry nearly as much about the Westernize ones who were raised in this country and don't hold closely to Islam.

"I remember reading about this so-called "muslim" miss usa. There were pics of this girl doing strip shows and partying and modelling. All leading up to the pageant."

I don't know about all of the extracurricular activities outside of the pageant; but, I wouldn't doubt it since she can get away with those things in a more open and tolerant place like the U.S. She is not likely to be challenged too much and threatened to be punished like with sharia in the more intolerant lands like what we find in the Middle East and some Asian countries.

"Anyone remotely devout wouldn't be doing half the things she does."

Exactly! They would be lucky to even be alive or in jail in some areas.

In my country, seems like young muslim artists are not ashame of showing some parts of their bodies to get the fame and money, but once they are famous and rich, suddenly they wear veils and become pious. What hypocrisy.

Why would that matter.

Shiites aren't exactly perceived as being "real muslims" Even the most ayatollah of ayatollahists.

Sunnis consider them to be perverts.

But you're right though. She's muslim by classification, but not devotion.

Hey, if most muslims took their religion as seriously as she did........we'd be in good shape.

Muslim or not, I hope she gets off the sauce.
Drinking like this and doing these things doesn't bode well for anyone's health, physically or spiritually.

What was she doing in Highland Park? I am not trying to start any rumors but..that's a HIGH crime area full of drugs and prostitution.

If all people will take their religions seriously, then the world will be weirder than this. I think her religion is irrelevant in this drunk driving issue.

Despite religion everyone is entitled to drink but be responsible enough of your actions. When driving under the influence of alcohol be ready for the consequences of your action just in case you fall for an accident on the road. We can ask help from lawyers on legal actions about drink driving accidents.

We constantly represent people of Muslim faith for drink driving offences in QLD & NSW despite the fact that drinking alcohol is against their religion. All of these clients are usually more petrified of their family finding our rather than the consequences that will flow from their Court hearing.