Of course, we all know that Ali's refusal to acknowledge Western law and her fundraising for jihad have absolutely nothing to do with Muhammad's command to establish Sharia and to wage jihad. Total coincidence. 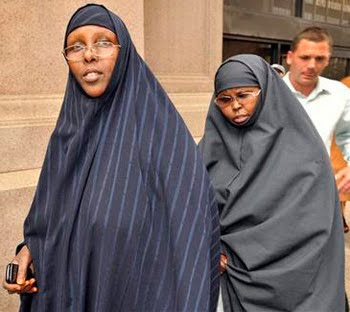 MINNEAPOLIS (AP) -- A Minnesota woman on trial for allegedly funneling money to a terrorist group in Somalia was found in contempt of court Monday when she refused to stand for the judge and jury, citing religious grounds.

Chief U.S. District Judge Michael Davis found Amina Farah Ali in contempt for failing to stand as court convened and recessed several times during the day, and later sentenced her to 50 days in jail.

He also ordered Ali to be detained for the duration of the trial because of her "behavior in this courtroom." She had been released pending trial as long as she did not violate any laws, but in a written order on Monday, Davis said Ali violated the law when she failed to rise and he revoked her release.

Ali, 35, and her co-defendant, Hawo Mohamed Hassan, 64, are accused of being part of what prosecutors called a "deadly pipeline" that sent more than $8,600 and fighters from the U.S. to Somalia.

As jury selection was beginning Monday, Ali refused to stand when Davis entered the courtroom. She was arrested, and there was a brief recess before court resumed. Davis also said if Ali continued to refuse to rise for the jury, she would not be allowed in the courtroom during her trial, and would have to watch the proceedings electronically.

"I hope that you will rise when the jury appears, but that's your choice," Davis told Ali in court.

"The mere failure to stand is not so disruptive that the case could not go forward," Scott said.

Davis said Scott's interpretation of the law is wrong. In his written order, Davis said that while religious freedom is protected, Ali hasn't shown that her rights take precedence over the requirement to rise, which is designed to mark the beginning and end of court sessions, show respect for the system and help judges maintain order. . . .

Ali and Hassan, both U.S. citizens of Somali descent, were among 20 people charged in Minnesota's long-running federal investigations into recruiting and financing for al-Shabab, which the U.S. considers a terror group with ties to al-Qaida. Investigators believe at least 21 men left Minnesota - home to the country's largest Somali community - to join al-Shabab.

Though others have pleaded guilty to related charges, the women are the first to go on trial.

Ali and Hassan maintain their innocence, saying they were collecting money and clothing for refugees. But prosecutors allege the women went door-to-door and held teleconferences to solicit donations for the fighters. In one of those recorded calls, investigators allege, Ali said to "forget about the other charities" and focus on "the jihad." In others, both women speak with the leader of a militia allied with al-Shabab, and Ali gets updates on the fighting. (Read more.)

what is the Islamic rule against standing in court? Just curious.

I think the real problem comes in with the statement in the article "...and that her beliefs should trump courtroom decorum." I think that's definitely a loaded statement.

If she won't stand out of respect for the judge, what else won't she do because religion gives exception? I can see if she was handicapped and COULDN'T stand...

Everyone has 1st and 6th amendment rights in the United States. True.

One of the few times I would welcome the full niqab. WOWZERS!

If only we could ban Islam from the U.S. because it is not a religion but a heinous police state.

Did anyone notice the woman in Higab are carrying the kufar cell phone ...

Brother David, you should change the title to "Muhajaba acknowledge kufar's cell phone"