Since Anders Behring Breivik was not a Muslim, perhaps we should conclude that a blond-haired, blue-eyed Norwegian spray-painted "Islam will rule" on the synagogue. Above all else, we must remember that Muslims love Western democracy and have no intention of imposing Islam on anyone, especially Jews. 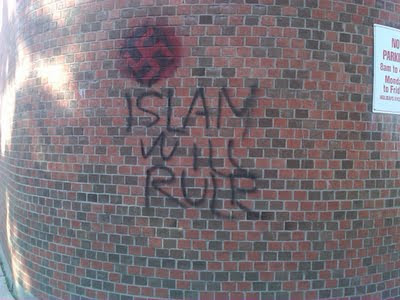 Toronto--A synagogue in the city's northeast end was the target of anti-Semitic graffiti.

Staff members of Beth Tikvah Synagogue on Thursday found the words "Islam will rule" and a swastika spray-painted on the exterior of their building.

According to a press release published by the Canadian Council for Israel and Jewish Advocacy, police have been contacted and measures were taken to increase the security at the synagogue.

Shimon Fogel, CEO of the Canadian Jewish organization said in a statement that the primary concern is the safety of the staff and its congregants.

"We will remain vigilant in the wake of this disturbing and offensive event." (Source)

I live here in Toronto and it has been a horrible summer. When the team was here from Dearborn we were nearly arrested for passing out tracts in front of the mosque. Because we were not breaking any specific law the cops could not do anything, But we warned that, "we will be back" by the cop.

On my blog [http://knowthetruthaboutislam.blogspot.com/]I posted a story of a man who was punched in the face with a closed fist by a Muslim woman for taking pictures in a public place. He and his son were threated by a group of Muslims and yet no charges were laid.

And as you pointed out a Jewish Synagogue was vandalized. And now thre is another honour killing.

There are plenty of examples of Churches, Synagogues, and Mosques being vandalized with hate speech. It's not that hard to Google and find hundreds of these. Of course vandalism and graffiti and racial slurs of any kind towards anyone is criminal. All are equally "hate crimes" and criminals should be punished regardless of which house of worship they vandalize. So why should this one be any different?

One thing in this specific example is striking to me. Notably missing from this specific article are the phrases "hate crime" or "racial slur".

Why are these phrases missing? I don't know how much more of a hate crime or racial slur you can get than by painting a Swastika on a Synagogue... and since the Jews are the only example of an Abrahamic religion that can be both a religion and a race of people... those two phrases seem perfectly apropos.

In my readings it seems that articles about Synagogues being vandalized are more apt to use "anti-antisemitism" or "anti-semitic" than "hate crime". That's just my observation. Maybe I'm wrong.

Surely by comparison if the Star of David and the words "Zionism will rule" were spray painted on a Mosque (has that ever happened?) it would surely be instantly labeled as a "hate crime" and likely (and inexplicably) as a "racial slur"...

Finally, I thought Toronto was known to be this "Mecca" of multiculturalism (see what I did there)??

Hitler would be proud.

Of course when Hitler wrote Mien Kemph he must have had in mind what the Qur'an had to say about the Jews.

let's see if the muslim community condem this act, and try to hide what we all know, their hate to the Jews, and their desire of create a new crusade to make "Islam Rule"

I think things like this need to happen before Jews get to realise what you have been talking about since last year. I remember your show on ABNSAT with Pastor Joseph about the cancellation of a former muslim lady who was to speak about the plan of muslims towards jews but the show did not take place. It was cancelled by a jews group. So, I do not like it but I think it is a wake up call to the Jews and all the westerners.

I'd like to hear from you Mr. Osama A. about this issue and I have got a rebuttal on the issue of "Allah praying" it is true Allah prays in the quran. The answer you gave last time Mr. Osama doesn't have legS to stand on. Please let me know and I will give evidences. Thank you

MAY YAHWEH BLESS YOU ALL IN JESUS' NAME NAME.

No word from the "secular" and "Western" authorities of Canada?
Again?
Yeah, it's Sharia all right!
Conquest without firing a shot-- just through terror!

To be an Islamic city is not to be multicultural.
It is to replace the democratic authority of pluralism, time-honored in the West, with the power of Sharia and Islam.
Shall we all expect to get our faces punched within our lifetimes?
Obviously the Toronto police find nothing the least bit illegal or unjust in that!

Since Anders Behring Breivik was not a Muslim, perhaps we should conclude that a blond-haired, blue-eyed Norwegian spray-painted "Islam will rule" on the synagogue.

David, I'm not sure I understand the purpose of your comment here...

But here is my question to you: Would that be an unreasonable conclusion? Why? Why not?

In fact, it would not be out of the realm of possiblilty that a Jew did the vandalizing... would it not?

Possibly I am missing your point-- So Help me out if you have the time.

CB said: "David, I'm not sure I understand the purpose of your comment here..."

I'm not sure how you could miss it. Whenever Muslims commit a crime, the media reminds us that other groups commit similar crimes. Now that a non-Muslim has committed an act of terrorism, we're supposed to be on guard against thinking that a crime could have been committed by a Muslim, even if the crime is writing "Islam Will Rule" on a synagogue.

CB said: "In fact, it would not be out of the realm of possiblilty that a Jew did the vandalizing... would it not?"

I find your comment antisemitic and racist against Jews. To suggest that any non-white non-Norwegian could ever commit a crime is unthinkable.

Notice what you said, though: "it would not be out of the realm of possibility." Is that your criterion for making a claim? Alternatives must be logically impossible? If that's the case, there would be no news of any kind, since there are always alternative possibilities. It's possible (albeit absurd) that Anders Breivik is an undercover al-Qaeda operative, upset about bin Laden's death. It's possible (albeit absurd) that the September 11th terrorist attacks were carried out by aliens from the Andromeda galaxy. It's possible (from my perspective) that you're really Osama Abdallah, posting comments under a false name. Should these possibilities keep us from going with the most probable explanations?

From what I have read Ontario forbade Sharia Law years ago,the same for Quebec province in Canada.It happened very quickly.
There is a comedy called"Little Mosque on the Prairie" in Canada which is as uninteresting as all the other programs on TV around the world.

What is really interesting is the astonishing tens of millions who watch Father Botros Zakaria's shows and the shows of other anti-Islam people in Arabic and other languages,like Persian.

The signs are the Islamic world will break down.I know history and all signs are the Arab Spring will no more solve the economic problems of the Muslim world that the regimes that came before it.That is reality,there is too much cultural-religious baggage for a quick change.
More and more economic refugees will try to enter Europe but the thing is:"there are no more jobs in Europe,take the case of France.

Quote:
I'm not sure how you could miss it. Whenever Muslims commit a crime, the media reminds us that other groups commit similar crimes.
end

Exactly.
In effect, they say that the crimes of Christians redeem and allow the forgiveness of the crimes of Islam.
The crimes of one culture do not excuse the crimes of another.
Only in a culture of extreme vengeance and tribalism is this sort of reasoning possible.
And Islam is tribal.
There is absolutely nothing modern or rational in it.

Bible already told that these things will happen. People will start war against Israel and they will be punished for attacking Israel.

I give some you tube links below

http://www.youtube.com/watch?v=nazoWyfS_c8&feature=related
- BIBLE PROPHECY - The End of the world MUST SEE

http://www.youtube.com/watch?v=TytJIoCZABg&feature=mfu_in_order&list=UL
- STARS will fall MUST SEE

http://www.youtube.com/watch?v=UWzUJ3yQqiI&feature=related - AMAZING PROPHECY - What Is Up With Turkey

I didn't know how to contact you so I am giving you a link about a Muslim comedy show coming to Murfreesboro, TN. The religion editor of my newspaper, The Huntsville Times (Huntsville, AL), wrote an article about it. I have written a letter to the editor in response. Here is the link http://blog.al.com/living-times/2011/08/laugh_with_a_muslim_fear_not_b.html

Thank you for your excellent blog.

Thank you for your response.

And yes I am Anders Breivik, posting comments from an alien in the Andromeda galaxy who is an undercover al-Qaeda operative, upset about bin Laden's death.

Who is Osama Abdallah?