How dare these racist, intolerant, bigoted Islamophobes arrest a man for making a bomb threat! Don't they know his religion commands him to fight the unbelievers (Qur'an 9:29)? By denying his right to blow people up, they're violating his freedom of religion! 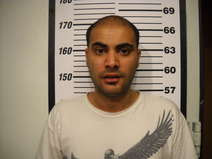 BRISTOL, R.I. -- The suspicious person arrested at Roger Williams University on Thursday was a Saudi Arabia man studying English, police said Monday. They had been called to investigate a possible bomb threat.

Lt. Steven Contente said Abdulrahman Khalid Althuwayb, 25, asked for food service at the dining center before it opened Thursday morning. A dining supervisor said that Althuwayb was served, and he was asked to come during business hours next time. Two university employees told police they heard Althuwayb say, "OK, don't worry, today is the last day, and tomorrow I blow the walls out."

Bristol Police took him to headquarters and charged him with making a bomb threat or similar false report. He was arraigned in District Court, Providence, on Friday. Surety bail was set at $10,000. He was unable to post 10 percent in cash or property worth the full amount. He was referred to a public defender and awaits a July 8 felony screening. (Source)

Whether he meant it or not, what he did was wrong. But what does this has to do with Islam, you ignorant?! "religion commands"? really? An individual's actions doesn't reflect what his religion says. What do you know about Islam apart from what you here from the news and people like you? Stop writing and start reading

What would Roger Williams say about this? He held the belief that virtuous pagans could go to heaven.
I wonder what kind of virtue this is.

BTW, I suppose you missed the part where I gave the reference for fighting unbelievers. The verse reads:

Last time I checked, we're not paying the Jizyah. Hence, Muslims are supposed to be fighting us. Fortunately, you're right about one thing. Many Muslims ignore the teachings of Islam. This is why so many Muslims live better lives than their religion commands them to live.

Muslims can and do become decent human beings in spite of, not because of, Islam.