A Muslim yelling "Allahu Akbar" attempts to storm the cockpit, and authorities "do not yet have a motive." Perhaps he was looking for some extra peanuts. 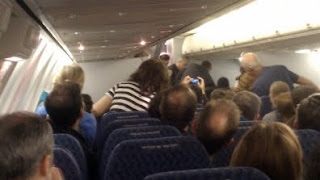 SAN FRANCISCO – The passengers sat stunned as they watched a man walk quickly toward the front of American Airlines Flight 1561 as it was descending toward San Francisco. He was screaming and then began pounding on the cockpit door.

"I kept saying to myself: 'What's he doing? Does he have a bomb? Is he armed?'" passenger Angelina Marty said.

Within moments Sunday, a flight attendant tackled Rageh Almurisi. Authorities do not yet have a motive.

While authorities said that Almurisi, 28, of Vallejo, Calif., has no clear or known ties to terrorism, the incident underscored fears that extremists may try to mount attacks to retaliate for the death of al-Qaida leader Osama bin Laden last week.

Federal agents are investigating Almurisi's background. He was carrying a Yemeni passport and a California identification card, authorities said.

Yemen, a nation at the southern tip of the Arabian peninsula, has been a focus of U.S. officials because one of the most active branches of al-Qaida operates in the remote part of the country.

Almurisi went toward the cockpit door 30 minutes before the flight from Chicago was supposed to land on Sunday night, San Francisco airport police Sgt. Michael Rodriguez said. Almurisi was yelling unintelligibly as he brushed past a flight attendant.

Marty, 35, recalled that she and other passengers on the plane were stunned when they saw Almurisi walking down the aisle. She said a woman in a row across from her who speaks Arabic translated that Almurisi said "God is Great!" in Arabic.

Andrew Wai, another passenger, told KGO-TV on Monday that the wife of one of the men who took Almurisi down later said Almurisi was yelling "Allahu Akbar."

"There was no question in everybody's mind that he was going to do something," Marty said.

A male flight attendant tackled Almurisi, and other crew members and passengers, including a retired Secret Service agent and a retired San Mateo police officer, helped subdue him as he banged on the door, police said. The flight attendant put plastic handcuffs on him. (Source)

Young man, it looks like the community around you doesn't like you very much.
Ever get the idea you may be trying to DO SOMETHING THAT IS CRIMINAL AND WRONG?

It had to do with Islam in the sense he felt the US was at war with Islam.People are finally waking up.I bet there are alot of journalists who are asking themselves:"Why,but why,are so many in the Pakistani government with Al-Qaida?"The ordinary person already knows why.It is for religious reasons.The only ones,like Lara Logan of CBS(who I dont respect as a journalist,she has no clue to what reality is),who "dont get it"are the majority of Western journalists.

He's testing our response. How far can they get without being shot - who's the air marshal, etc.

If you do not wake up America you will find yourself Sharia compliant and submitting to the Koran.

When a non-believer of Islam is face to face with an Imam or any member of C.A.I.R. and they are trying to advance their religion/cult on you, ask this one question:

I guess hand-to-hand combat will soon be incorporated into flight attendant training!