According to Islam, wives are the sexual property of their husbands:

Qur’an 2:223—Your wives are as a tilth unto you; so approach your tilth when or how ye will.

Tafsir al-Jalalayn on 2:223—Your women are a tillage for you, that is, the place where you sow [the seeds of] your children; so come to your tillage, that is, the specified place, the front part, in whichever way you wish, whether standing up, sitting down, lying down, from the front or the back.

Sahih al-Bukhari 3237—Narrated Abu Hurairah: Allah’s Messenger said, “If a husband calls his wife to bed (i.e., to have sexual relation) and she refuses and causes him to sleep in anger, the angels will curse her till morning.”

Sunan Ibn Majah 1853—The Messenger of Allah said: “If I were to command anyone to prostrate to anyone other than Allah, I would have commanded women to prostrate to their husbands. By the One in Whose Hand is the soul of Muhammad! No woman can fulfill her duty towards Allah until she fulfills her duty towards her husband. If he asks her (for intimacy) even if she is on her camel saddle, she should not refuse.”

With such a low view of women, it shouldn't be surprising that a Muslim politician would blame adultery on the victims, rather than on their husbands. 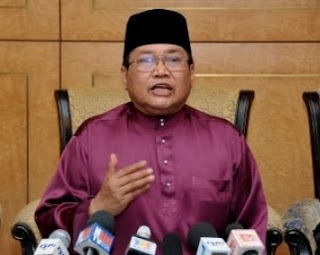 MALAYSIA—Malaysian men have extramarital sex because of “wives who neglect their responsibilities” to their husbands, a Malaysian lawmaker told Parliament on Thursday, outraging women’s groups.

“Husbands driving home after work see things that are sexually arousing and go to their wives to ease their urges,” said independent lawmaker Ibrahim Ali, according to online portal Malaysiakini.

“But when they come home to their wives, they will say, ‘wait, I’m cooking,’ or ‘wait, I’m getting ready to visit relatives’,” Ibrahim said.

“In Islam, wives are supposed to stop everything to fulfill their husband’s demands.”

His strident comments came as he asked about plans by the government’s religious development department to educate wives on their responsibilities.

Wives failing in their duties pushed men to go to “private places to satisfy their urges”, he said.

An aide to the lawmaker confirmed the remarks but declined further comment.

His comments prompted fury among women’s groups in a nation with a growing sex industry and a problem with human trafficking.

“I am appalled as he equates women to being a sex toy and what is worse is that he uses religion to try and justify his position,” she told AFP.

“The comments not only show that Ibrahim Ali is a Malay supremacist but a male supremacist as well.”

“Because people like Ibrahim Ali believe it is their right to get sex anytime from their wives, or otherwise seek it from elsewhere, that’s why you have a growing sex industry and we see such human trafficking cases,” senior coordinator Aegile fernandez told AFP. (Read more)

So much for the religion that boasts of the equality of the sexes.
Is this their idea of empowering women?

David, these men are violating Islam, you know. I don't remember which hadith states this, but according to Muhammad, there are three reasons when a Muslim is to be killed--1) for unlawful killing, 2) for apostasy, and 3) for adultery. These Muslim men deserve death, according to Islam; it doesn't matter that the wives "neglected their responsibilities" (though they are apparently sinning, too, says Islam). I know you've told me before that you post this kind of stuff to show that the same problems in the West that Muslims complain about also exist in the Islamic world, but isn't it going a bit far to say that Islam is to blame for this particular incident?

I must be missing something. Nothing in the article questions the Islamic penalty for adultery. It's just blaming women for causing adultery among their husbands. Even a man about to be stoned to death could say, "But it's all my wife's fault!"

Besides this, many Muslims would argue that the Islamic penalty for adultery should only be carried out in countries governed by Sharia. Since Malaysia isn't officially under Sharia (well, not all aspects of Sharia), the penalty isn't carried out. Hence, men aren't stoned to death. But they still get to blame their wives.

"Because people like Ibrahim Ali believe it is their right to get sex anytime from their wives, or otherwise seek it from elsewhere, that’s why you have a growing sex industry and we see such human trafficking cases,” senior coordinator Aegile fernandez told AFP."

There are some Christian men who have the a similar low view of women and female sexuality, though. I know of a controversial megachurch pastor who holds very disturbed attitudes to women and female sexuality, and has expressed these attitudes in his sermons, yet people flock to his church. So this is an area where the church could use some work, too. I suppose the major difference is whether or not these views have theological backing - yes in the case of Islam; no in the case of Christianity (e.g, 1 Cor 7:3-5).

Ibrahim Ali is a racist and a clown....and I'm from malaysia.