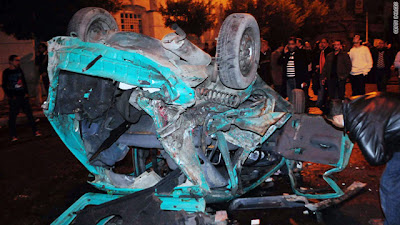 I remember a time when things like this used to surprise me. I'd like to return to those times.

CAIRO (Reuters) - A car bombing outside a church killed 21 people in Egypt's northern city of Alexandria as worshippers gathered to mark the New Year, security and medical sources said on Saturday.

The Interior Ministry earlier said 24 people were also wounded in the bombing, which prompted hundreds of Christians to take to the streets in protest. Some Christians and Muslims pelted each other with rocks, a witness said. Cars were torched.

Christians in Muslim-majority Egypt make up about 10 percent of the nation's 79 million people.

Egypt, due to hold a presidential election in September, has stepped up security around churches, restricting cars from parking directly outside them, after an al Qaeda-linked group in Iraq issued a threat against the church in Egypt in November.

The al Qaeda-linked Islamic State of Iraq, which claimed an attack on a church in Baghdad in November, threatened the Egyptian church over its treatment of women the group said the church was holding after they had converted to Islam.

"This is a scene from Baghdad," a witness told Reuters by telephone.

Police used teargas to disperse the crowd on the streets. Ambulances were also at the scene where medical personnel gathered body parts that were scattered over the area.

"We sacrifice our souls and blood for the cross," shouted protesting Christians near the Coptic Orthodox church where the blast struck, a witness said. (Read more.)

I am an avid reader of this blog. Often I see that you copy and paste text from sites such as CNN, BBC, REUTERS etc. Do you have the permission to do this? Because when I read these sites' TOS (terms of service), I see that re-distributing their material without obtaining prior permission is an offense and breach of copyright law.

I'm asking this merely to make you aware of the fact that if these sites know what you are doing, and you dont have their permission to re-distribute their articles/news, they might file a lawsuit against you and the fine can be hefty.

I'm merely making you aware of this because I don't want this website to die. I'm a huge fan of sam, you, pastor joseph, ABN and all my christian brothers, sisters, mothers and fathers out there. I'm an exmuslim christian and if you have time, check out my website at http://www.islamxposed.eu5.org

Why must this incidents happen year after year? This muslims actually think they wil go to paradise with the blood of other humans?

Lord Jesus when are you going to avenge the blood of those who have been martyred for you?????

As a matter of fact, when are you going to return and rescue your faithful ones??????

“Angry Egyptian Copts chant, ‘With our blood and soul, we redeem the cross,’ as the bodies of some of the dead are carried out into ambulances”

This is the Fox News caption depicting the helpless cries of grieving relatives at the place of murder and mayhem. No curse or threat of retaliation! What a contrast between followers of Islam and Christianity! Had there been a similar cowardly bomb attack by some Christian terrorists near a Mosque, their religious chant will be. “With our Guns and Bombs, we will kill the infidels to the last. Allah-hu-Akbar.” This is precisely the difference between God and Satan.

Ever since the US elected a person who is in total love with Islam, there is a resurgence in the violent activities of devout followers of this satanic cult and the innocent Christian followers in middle east are at the receiving end of their stepped up terrorist activities. The irony of the situation is that these are the oldest Christian inhabitants and it is their own brother converts who are tormenting them! Mr. Hussain Obama is not even showing any concern to these senseless killings. He is not even interested in calling these as acts by so called misguided radicals who have hijacked a wonderful religion of peace. Islam itself is the main business of ruling elite in Islamic countries irrespective of the type of oppressive governments. If under no threat, obligation or economic sanctions, it is a big risk for the corrupt elite to go after those busy in violent divine mission. Their main fear is that their oppressive Governments may be toppled by terming the actions against devout as un-Islamic! It means murder and mayhem of Christians is assured as long as Mr. Hussain Obama sits in the Whitehouse. Is it reached such a deadly and helpless stage, defying all human efforts, necessitating some sort of divine intervention to put an end to this Satan inspired menace?

YES, David Wood....can u please answer Anowarul's question. b/c that also has me concerned. i love this site and u have already gon thro to much problems i dont want u in more problems.

Here's a slideshow of pictures of the aftermath:

I hope it doesn't get any worse over there...

The things we were doing before we accepted the Grace and Love of our Master, Lord Jesus, were murderous in their own way. Now that we have been rescued by Christ Jesus, we are His hands for healing the wounded, His feet for carrying aid to the needy, His voice on behalf of the voiceless and His arms for upholding the fallen.

We are the Body of Christ - onto which will be poured the sins of this wretched world - to be borne away.

Am I saying that we should lie down and simply allow ourselves to be beheaded by the monster of Islam? By no means. What I AM saying is that to stop the hate-filled and racist ideology of Islam, we will invest EVERYTHING - just as did our Savior.

Decades ago, hundreds of THOUSANDS of young men and women offered themselves as living sacrifices to protect you and me from the horror of Nazi fascism. It is OUR turn. We are at war. In Christ Jesus, we will win this or the future of humanity may be forfeit.

I believe that most of you here understand this but I'm asking all of us [especially myself]: AM I DOING ALL I CAN DO TO RESCUE MUSLIMS AND OTHER SINNERS FROM THE NIGHTMARE OF ETERNAL DEATH?

Our efforts in prayer must have no ending. Our legislative efforts must be unrelenting. Our personal and corporate efforts for outreach must be tireless. Our financial investment must be EVERYTHING THAT WE CAN GIVE to our Churches and to beloved organizations such as ABN. Our networking with like-minded souls must be determined and on-going.

Such are our lives for foreseeable future. But you know this. There will be casualties. There will be grief. Yet Christ is Lord and He WILL inhabit the praise, service and worship of His children.

Be enraged against sin. Be OUTRAGED by Islam. Get on your knees in prayer and on your feet to give yourself completely. Time is short. The night is coming.

KAFIR AND PROUD!!
MAY JESUS CHRIST BE PRAISED!!

Here is some reactions in Canada.

At least it is way better than what Obama said.

I am glad David won't get in trouble for posting articles from news organizations.As I said before the solution is to letall the non-Muslims inside the West.I sometimes wonder if Europe will one day be like Egypt,with non-Muslims afraid to speak their mind.

I have noticed that when you show Muslims in the West clear passages of hate like 5:14 and 5:64 they say it means something else.That is real denial of reality.It is very sad,it is like talking to a racist,no matter what evidence you give they will never change.So those same people would approve of laws punishing us non-Muslims for criticizing the Koran and Muhammad(which is the same thing,the Koran is just the words of Muhammad).I am glad I was not born into such a society that would make think like that.And please don't forget to keep on praying for WILL and SHAFSHA,for their struggle,as they asked us.

"Then I saw thrones; those who sat on them were entrusted with judgment. I also saw the souls of those who had been beheaded for their witness to Jesus and for the word of God, and who had not worshiped the beast or its image nor had accepted its mark 4 on their foreheads or hands. They came to life and they reigned with Christ for a thousand years.
...
The second death has no power over these; they will be priests of God and of Christ, and they will reign with him for (the) thousand years."

Need I say any more?

"I remember a time when things like this used to surprise me. I'd like to return to those times."

im right there with you on that brother! god help them.