Muslims are commanded to fight unbelievers until there is no more unbelief:

Muslims are specifically commanded to fight Christians and Jews until we submit to them:

Muslims are commanded to terrorize their enemies:

Qur’an 8:60—Against them make ready your strength to the utmost of your power, including steeds of war, to strike terror into (the hearts of) the enemies, of God and your enemies, and others besides, whom ye may not know, but whom God doth know. Whatever ye shall spend in the cause of God, shall be repaid unto you, and ye shall not be treated unjustly.

Qur’an 5:33—The recompense of those who wage war against Allah and His Messenger and do mischief in the land is only that they shall be killed or crucified or their hands and their feet be cut off on the opposite sides, or be exiled from the land. That is their disgrace in this world, and a great torment is theirs in the Hereafter.

Given such passages in the Qur'an (along with many others), is anyone shocked when a young Muslim attempts to slaughter Americans?

PORTLAND, Ore. — Federal agents in a sting operation arrested a Somali-born teenager just as he tried blowing up a van he believed was loaded with explosives at a crowded Christmas tree lighting ceremony in Portland, authorities said.

The bomb was an elaborate fake supplied by the agents and the public was never in danger, authorities said. 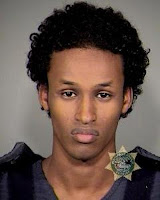 Mohamed Osman Mohamud, 19, was arrested at 5:40 p.m. Friday just after he dialed a cell phone that he thought would set off the blast but instead brought federal agents and police swooping down on him.

Yelling "Allahu Akbar!" -- Arabic for "God is great!" -- Mohamud tried to kick agents and police after he was taken into custody, according to prosecutors.

"The threat was very real," said Arthur Balizan, special agent in charge of the FBI in Oregon. "Our investigation shows that Mohamud was absolutely committed to carrying out an attack on a very grand scale." (Read more.)

i think Muslims use this to their advantage esp the ones who are in the west. When you ask a muslim why do muslims do this they get a chance to respond albeit distoring their scriptures and representing islam as a peaceful religion and they tell them dont let these MINORITY represent 2 billion muslims who are peaceful... ppl here are not aware of the entire text of islam and they in turn turn to Christianity and quote old testament and say look we are a religion which teaches peace where as Christianity does promote violence and genocide contrary to he Christian belief.

this is a two fold deception, not only they distort Islam and tell its a peaceful religion they distort Christianity and say its the one that promotes violence.

I spoke to few of my Muslim friends and ALL OF THEM think islam promotes peace and that these are a group of ppl who are mis representing Islam ... I mean do these guys really know islam or are they brainwashed to think Islam is peaceful ?

or do they know what Islam tells about killing apostates and all and act otherwise just as quran says that when muslims are a minority be peaceful but inside you curse them.

PAKISTAN: The Christian community in Karachi needs immediate protection from imminent attacks by extremists
Around a dozen Christian youths were arrested and tortured and their houses searched by their Muslim neighbours in the presence of police officers to arrest a young Christian man, Zohaib alias Noami, (20), the son of Pervez Rahi, who was in love with a Muslim girl, Anum, (18), the daughter of Muhammad Abid. Noami and Anum ran away together on the night of November 20 to marry in another city. After the incident a reign of terror was spread though the Christian community living in Baldia town and Saeedabad, Karachi, the capital of Sindh province.

The houses were attacked by Muslims in groups and many young Christians were arrested and handed over to the police. After being severely beaten by the mob they were taken to the Saeedabad Police Station where they were tortured by the police officers to reveal Noami's whereabouts.

Whilst the incident happened within the jurisdiction of Baldia Town it was the Saeedabad police that carried out the arrest of the young Christian men. The frenzied mob attacked houses belonging to local Christians and also tried to attack Saint Luke's Church. The town police officer of Baldia immediately sent police reinforcements to protect the Church. The presence of the police officers halted any further attacks but the fundamentalists threatened the community that the police will not be able to remain forever and when they left the church would be destroyed.

The schools in the vicinity have remained closed since November 21 and almost all the Christians, about 600 of them, left their houses. Those that remained have sent their daughters and women-folk out of the area fearing a strong reaction from the Madressas, the Muslim religious schools in the locality. In the meantime the male members of the Christian families have been ordered to report to the police station and inform them of the whereabouts of Noami.

The Asian Human Rights Commission wishes to warn the government to take serious and definitive action before things turn bloody and the looting and burning of Christian houses begins. It must be emphasised that in Baldia Town there are also the pockets of Taliban and other banned extremists organizations working for Al-Qaida who will use this incident of the love affair of between a Muslim girl and a Christian boy as the argument they need to protect the blasphemy law. The Government, particularly the authorities in the Sindh province, must provide full protection to Christian families of which are more than 5000 in Baldia and the surrounding areas.

It has been frequently observed in the past that the police always worked under the pressure from extremist groups and have never protected members of the communities of religious minority groups. Therefore to stop yet another attack on the Christians and their community the government should take immediate action. They must immediately instigate a dialogue between the different sections of Muslims and Christians in order to resolve this situation peacefully. Both Islam and Christianity are religions that promote love, peace and harmony and it is vital that this is pointed out strongly to members of both sides.
# # #
About AHRC: The Asian Human Rights Commission is a regional non-governmental organisation monitoring and lobbying human rights issues in Asia. The Hong Kong-based group was founded in 1984.

this is a report by AHRC

Islam does ineed promote peace . . . for Muslims.
Of course.