Muslim Gang Targeted Young Girls for Rape in the UK

Muhammad promised his followers that Allah could forgive them, even if their sins were as heavy as a mountain.

When this teaching is combined with Muhammad's moral example (sex with a young girl, rape of female captives, etc.), and the Islamic view of women and unbelievers, the results we see shouldn't be surprising.

The Telegraph--At home, Abid Saddique and Mohammed Liaqat, both of whom were married with young children, were considered clean, upstanding family men as well as devout Muslims.

But once they left their front door and their wives behind, they turned into vodka-swilling, cocaine-binging paedophiles who spent every available moment randomly targeting young girls on the street, befriending them, and then horrifically abusing them.

The 28-year-olds were at the head of a 13-strong gang who would film the assaults on their mobile telephones. 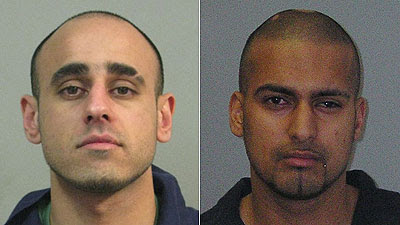 For over 18 months, dressed “sharply” in designer western clothes, wearing jewellery and sporting short haircuts, the pair cruised the streets of Derby in a silver BMW 5 series with blacked-out windows, approaching girls at random and with a bottle of vodka and plastic cups hidden under the front seats.

An undercover investigation by Derbyshire Police, dubbed Operation Retriever, was split into three trials which have run since February at Leicester Crown Court and can only now be reported.

The victims, aged between 12-18, ranged from girls in care to a 14-year-old A-grade student from a strong, middle-class home. They were predominantly girls with a troubled background.

They would pick their victims up night and day and from anywhere - at train stations, on estates, in the city centre, walking home from school.

They would be charmed, given drink and drugs, and after mobile numbers were handed over, contacted again to meet up, go to a party or for a drive, where the abuse took place.

At the opening of the first trial, held at Nottingham Crown Court, prosecutor Yvonne Coen QC said: "They preyed on young girls who were vulnerable, either because of their age and because of their own personal circumstances.

"They exploited these girls either for their own sexual satisfaction or for their friends.

"The girls involved in the case were young and however cool and grown-up they may have wanted to be or intended to appear, in fact they were naive and impressionable.

"The reason for the main defendants' relentless pursuit of the girls in this way was quite simple. They wanted sex, whether the girls wanted sex or not."

Another time, a 14-year-old girl was filmed having sex with three of the gang in a hotel room as cheers ring out.

The group faced 75 charges between them relating to twenty six girls, but police believe there are many more victims who have not come forward.

Yesterday, Saddique and Liaqat - who since legal proceedings have begun had grown long beards and now wear Islamic dress - were convicted of charges of sexual assault and sexual activity with a child, bringing the trials to a close.

This year they had already been convicted of a series of other offences including rape, sexual assault, sexual activity with a child, false imprisonment and making child pornography. They will be sentenced for all their crimes in January. (Read more.)

It seems from all these stories that Muslims actually have a preference for 12 yr old girls. The Prophets example.

But AFTER they get caught they "had grown long beards and now wear Islamic dress". How convenient!

Now they will say "it is part of our religion, you cannot discriminate us". Give me a break! Islam is such an excuse for sickos.

This might be the most disgusting thing I've heard all day. I simply can't imagine the emotional pain the girls are experiencing because of the traumatic events. I pray that the girls will receive comfort from the Lord, and that the men will turn to God in repentance.

But is it just me, or does it look like the men were simply being poseurs? As in, they pretended to be all religious and righteous and stuff for everyone to see, but in reality, they are just drunks and rapist paedophiles. I don't think they're really Muslims.

Anyway, Muslims say it doesn't make sense for someone to bear the sins of someone else, but look at the hadith David cited! Can Muslims explain it in light of their objection to Jesus paying for his followers' sins?

So if he has no guaranty for himself and he ever give any assurance to his followers. How can Allah can forgive their sins really can’t understand.

On the other hand Jesus speaks with full authority and assurance check it out: John 14:6, Jesus answered, "I am the way and the truth and the life. No one comes to the Father except through me.

John 10:9 I am the gate; whoever enters through me will be saved. He will come in and go out, and find pasture.

John 11:25 Jesus said to her, "I am the resurrection and the life. He who believes in me will live, even though he dies;

39: one of the criminals who hung there hurled insults at him: "Aren't you the Christ? Save yourself and us!"
40: But the other criminal rebuked him. "Don't you fear God," he said, "since you are under the same sentence? 41 We are punished justly, for we are getting what our deeds deserve. But this man has done nothing wrong."
42: Then he said, "Jesus, remember me when you come into your kingdom."
43: Jesus answered him, "I tell you the truth, today you will be with me in paradise."

Conclusion:
Absolutely Muhammad’s moral example was not very good and there religious leaders know that and they are so afraid to tell their own kids and whenever you try to point out anything about Muhammad’s life to them either you have to face threats or blasphemy. That’s why Jesus Christ said “you will know by their fruit”

It is good thing that they are dressing in traditional Islam dress and beard, because people who see it can know it is Muslim-believing men who are doing this, and not just some amoral thugs.

39: one of the criminals who hung there hurled insults at him: "Aren't you the Christ? Save yourself and us!"
40: But the other criminal rebuked him. "Don't you fear God," he said, "since you are under the same sentence? 41 We are punished justly, for we are getting what our deeds deserve. But this man has done nothing wrong."
42: Then he said, "Jesus, remember me when you come into your kingdom."
43: Jesus answered him, "I tell you the truth, today you will be with me in paradise."
end quote.

So important, it needs to be repeated.
Again and again.

The news of any rape is sad to hear. However the verdict is out as to what is the root cause of such behaviour. As we know unfortunately this type of crime is not limited to a racial group or religious group for that matter.
We could conclude that the example of Mohammed will maybe make them not see women in the best light hence maybe excuse this type of behaviour in their sick minds but I am not sure that the case for this is strong.
Let us just call them for what they are simply "criminals".
Now if they were saying Allah Akbar maybe before raping them then we could say that the crime was religiously motivated.
I do not see a hadith which said ply them with Alcohol before raping them.

It is not a problem of religion, it is an issue of accepting other people in the world, and as long as you are hunting down the faults by those others, then there is no possiblity of living with them, and it is better, from your point of view of course, to throw them back to their homelands. I will pray to Allah that he may have mercy upon you and guide you to the righteous way, whatever it is.