Elisabeth Sabaditsch-Wolff is standing trial for criticizing Islam. Why should that be considered a crime at all?

Pay attention to what's happening in Europe, friends. If people don't figure out what's going on, we could be next.

For details on the first day of trial, click here. 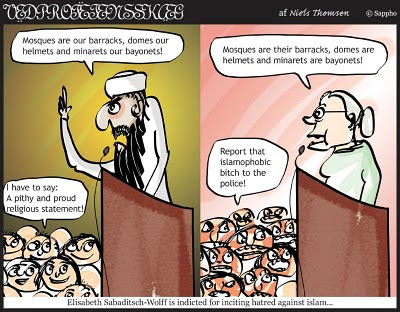 This is getting scarier and scarier. Europe is basically gone. It's time for us here in America to wake up. It's not Islamophobic to speak the truth about Islam.

@ the muslims-
If you're going to turn America, or any other country in North America and Europe, into one of the countries you left, go back to where you came from; the freedoms we have in such countries were won by the blood of the likes of George Washington, Patrick Henry (my brother in Christ), etc. We don't need you guys like you taking them away from us.

and to all other Americans out there-
It's time for us all to stop being politically correct. The more we continue the ostrich approach towards things like this, it'll be likely that we'll have a trial like this.

Offtopic again but I am having a debate with some Muslims at Yahya's blog.I wrote something about polygamy.

Jesus was God and his view on polygamy determines the CORRECT interpretation of MOSAIC LAW.Who should know Mosaic law better than God?

In MATT 19:9/LUKE 16:18 he said if a man DIVORCES his WIFE and MARRIES ANOTHER he commits ADULTERY.

He was refering to a DIVORCE that he considered invalid,so the man was STILL MARRIED (for Jesus).So his SECOND marriage made him have TWO WIVES(for Jesus),yet he calls it ADULTERY,so polygamy is condemned.

It talks about the king of the Jews and says "he will NOT MULTIPLY his WIVES."

Does it mean not to have 100 wives but it is ok with 3-5?That is one understanding of it.Another is it means NOT have more than ONE wife.From Jesus we know THAT is the CORRECT interpretation.

EXODUS 21:10:"IF he marries another woman, he must not deprive the first one of her food, clothing and marital rights."

They are a toleration for those who disobey (as Jesus said that EASY DIVORCE was tolerated by God but not approved) but that is all,not a approval of polygamy(based on Jesus'interpretation).

Maybe if I have some time later I will comment at greater length, but if I could, at least for future reference since it probably won't be useful to you at this moment since you are already engaged on the topic, I would recommend John Murray's book, Principles of Conduct: Aspects of Biblical Ethics. The first two chapters - 1. Creation Ordiances, and 2. Marriage and Procreation - clearly address these issues, and argue for the continuity of Biblical ethics, which on the issue of marriage is clearly monogamous. Sorry I can't say more right now.

The cartoon is hilarious. Unfortunately the reality it depicts is not funny at all.

Thanks for the information,Anthony Rogers.

Minoria, Godspeed your debate. I hope this isn't too late, but these are my thoughts on polygamy.

To understand the heart of God, read Matthew 19:3-9
Remember that Jesus said that from the "beginning it was not so." He is referring to Adam and Eve and how God gave Adam one wife and she completed him.

However, sometime after that, there was a fall from grace that women had to endure until their Savior came. I'm not even close to a Calvinist by any stretch, but I am talking about the verse in Genesis 3:14-15

(--specifically verse 15 "And I will put enmity between you and the woman and between your offspring and hers. He will crush your head, and you will strike his heel."

When I was a young woman, I took this to be totally literal, and I do believe this has a literal component, but like many biblical objects, this "enmity" has a spiritual significance as well.

Notice that the enmity was between the woman and the serpent. That is important. Satan hates women.
If you study briefly on the history of women, you will see that every culture on earth has abused them, broken them, murdered them, abandoned them-- Good grief! To not recognize what mutilations and murders have happened to women as demonic, seems almost insanity!

Israelite women were treated better than any of their neighbors, with their man-made gods. They were more frequently burned and butchered as sacrifices to idols. Female infantcide was more frequently practiced. Female mutilation. I encourage you to look this information up.

However, even under the law of Moses, the Redeemer of women, her Savior had not come. Therefore, women were still under the opression of the hardened heart.
That is why Jesus had said "Because of the hardness of your hearts, Moses commanded you to write her a certificate of divorce."

This is what life is like for women under Islam or any husband who is not Christ-centered. Our westernized laws protecting women which are based on a Judeo-Christian mind-set, are the best that have ever been.

When Paul walked into Corinth, to convert people from idolatry, he was freeing the every day woman of Corinth from her obligation to serve in the temple of Aphrodite. That temple is still there, and you can look it up. In Corinth, everyday women were chosen to act as prostitutes in that temple--where smelly, diseased sailors from around the globe paid to have her. The Corinth women were told it was "an honor", and they gritted their teeth and did it.
It was painful, it was humiliating, and they died from the diseases they got from it.

That was good treatment compared to what earlier societies did to their women.

When Jesus came, He gave men the power to finally crush the head of Satan.

Romans 16:20 "The God of peace will soon crush Satan under your feet."

It was in the covenant of Christ, the Law of Liberty, alone, that women have found a Hero, a Savior, a Glorious Knight in shining armor. Read Revelation 19:11-15, and realize who Jesus is. He fulfills our wildest dreams of the the Knight coming on a White Steed!

And it is in the hands of His followers that wise women will find their heroes. It is the New Testament that changes the hearts of men.

The elders and deacons can not be polygamists.(1 Timothy 3:2) Eventually as cultures throughout the globe obeyed the gospel, men gave up polygamy. They gave it up to obey the commandments given to husbands. They taught their sons to desire monogamy, and throughout the world, Christian men became monogamist.

You didn't say whether the person you was debating with was a female or a male. If it is a female, you should ask her which husband she would like for herself. The husband describe in Ephesians 5, or a husband like Mohammad, who made his wives cry and squabble because of their jealousy and unfulfilled needs to cling to their husband.

You can even take her to some of the stories in the Old Testament, and have her look at the lives and emotions of women who had to share.

Then just ask her, which Savior does she think had her heart in mind, when he directed men.

Tolerance becomes a crime when applied to evil. Thomas Mann

Muhammad, founder of Islam and author of Koran, was mentally sick psychopath, could not read and write. While in seizure, he uttered disjointed phrases, which his followers represented as Allah divine afflatus. This is the history of Islam that muslims and “honest and free” western media would not like you to know. These facts show that islam is not a religion, but a cult.
Read: “History of Middle Ages” Professor Nikolay A. Osokin, Textbook (in Russian), Publishing house: Imperial University Printing Office, Kazan, 1888, 771 pp.; Publisher: ACT, Harvest, Moscow, 2008, 672 pp. (reprint)
“Great” arab inventions. Obama’s Cairo speech.
In his Cairo speech, Obama accredited to arabs all fundamental inventions human race made over centuries. None of the Obama mentioned is true, as every person graduated from credible high school knows. However, it does not mean that arabs, great nation with centuries of history, has no inventions critical for human life. They have and here they are:
1. Ethnic Cleansing - invented centuries ago, implemented over 2000 years ago in Israel when they occupied Israel and disseminated Jews around the world; from 1948 through 1953 arab countries expelled a million Jews and stole their properties; in 1974, Turkish armed forces invaded Cyprus, captured 36 percent of its territory, partitioned the island, implemented a policy of “ethnic cleansing” and sent close to 200,000 Greek Cypriots southward as refugees who lost their property, desecrated churches and cemeteries, and in 1983 declared the northern Turkish Republic of Cyprus; in 1999, Kosovo Liberation Army stormed homes of the last 15 Jews in Kosovo’s capital, who had to clear out, with just the clothes on their backs; recently, Jews in Yemen were under attack and have been relocated to Britain.
2. Genocide – invented by Turks and implemented in 1915–1917 in Armenia: over 1.5 mln. Armenians, including children, died.
3. Holocaust – invented by Haj Amin al Husseini, the Mufti of Jerusalem, in 1920s in Palestine (occupied territory of the State of Israel); implemented in Palestine in 1920s-30s; in 1941, Haj Amin al Husseini brought the Holocaust idea to Hitler and helped him to implement Holocaust in Europe 1941-45; he organized in Europe two islamofascist brigades that operated under SS control, had their own concentration camp, and killed tens of thousand of Europeans, including Jews.

Islam is based on three fundamental principles:
1. Stealing
2. Killing, and
3. Lying


Koran says:
"Slay them wherever you find them. Fight against them till idolatry is no more and God's religion reigns supreme" (Sura 2:190),
"Seek out your enemies relentlessly" (Sura 4:103),
"Make war on them till idolatry shall cease and God's religion shall reign supreme" (Sura 8:36),
"When the sacred months are over slay the unbelievers wherever you find them. Arrest them, beseige them and lie in ambush everywhere for them" (Sura 9:5),
"Believers, make war on the infidels who dwell around you" (Sura 9:121),
"When you meet the unbelievers on the battlefield strike off their heads" (Sura 47:3),
"Prophet, make war on the unbelievers and the hypocrites and deal sternly with them. Hell shall be their home, evil their fate" (Sura 66:7).

Koran is Islamic Mein Kamf. Islam is fascist cult and must be eliminated from the earth.