*****Click here for a complete summary of our experience in Dearborn.*****

Nabeel Qureshi, Paul Rezkalla, Negeen Mayel, and I were all charged with “Breach of Peace.” All four of us were found “not guilty,” due to indisputable video footage showing that we did nothing that would qualify as disturbing the peace.

However, Negeen was found guilty of “Failure to Obey a Police Officer’s Direction or Order,” which is defined as follows:

“Any individual who is given direction or order by hand, voice, emergency light, siren, or other visual or audible signal by a police officer acting in the lawful performance of his duty, and who willfully disobeys and/or disregards that direction or order, is guilty of a misdemeanor.”

The question, then, is whether police had probable cause when they approached Negeen, surrounded her on three sides (by six people), ordered her to stop filming, ordered her not to walk away, grabbed her, seized her camera, dragged her out of the tent, and later threw her in a jail cell. 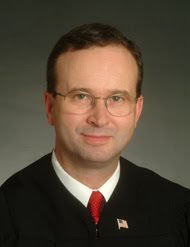 This issue came before Dearborn Judge Mark W. Somers, who decided before our trial that the officer indeed had probable cause against Negeen. He reasoned that, since there had been a complaint by Roger Williams, police had reason to believe that Negeen had committed a crime.

There’s just one problem here. Negeen wasn’t accused of committing a crime. Williams simply complained that Negeen was “filming within hearing distance” when Paul, Nabeel, and I supposedly surrounded him and harassed him (click here to see what actually happened). Is it a crime to film someone in public? Not at all. Thus, while three of us were accused of committing a crime, Negeen was not.

Interestingly, during the trial, our lawyer Robert Muise asked Corporal Brian Kapanowski (the officer who manhandled Negeen and charged her with two crimes for assuming that she had Constitutional rights) if the complaint of Roger Williams provided any basis for thinking that Negeen had committed a crime. Corporal Kapanowski responded in the negative, acknowledging that there is no law against filming someone in public.

What does this mean? It means that police had no right to detain Negeen, grab her, seize her property, drag her out of the tent, or take her to jail. If police didn’t have probable cause, Negeen was under no obligation to stop recording and was free to leave.

Why, then, wasn’t the charge immediately thrown out as soon as Corporal Kapanowski admitted that he didn’t have probable cause against Negeen? It’s simple. Judge Mark Somers had already ruled, prior to trial, that police did have probable cause against Negeen. This meant that, according to Judge Somers, Negeen was obligated to obey Kapanowski’s orders, even though she wasn’t (since, as officer Kapanowski acknowledged, there was no basis for thinking that she had committed a crime).

With such an absurd ruling in place, the jury found Negeen guilty. Judge Somers had ruled that Corporal Kapanowski had the right to issue orders to Negeen, and Negeen, in a frightened state, surrounded by six individuals (Corporal Kapanowski, Officer Smith, Arab Chamber of Commerce member Amal Alslami, festival volunteer Roger Williams, and two members of festival sponsor Access), didn’t immediately comply with the officer’s orders. (Note: Negeen didn’t want to turn off the camera because she knew that we had been assaulted numerous times last year by festival security. She wanted to continue filming for her own safety.)

If you’re wondering why a judge would do this, knowing that a little girl’s future hangs in the balance, the judge’s motivations became clear to us when he was sentencing Negeen. He spent several minutes praising police officers, and he told Negeen that, unless a police officer is hurting her, she should always obey his orders. (It seems, then, that if a police officer orders Negeen to wash his car, she must comply, so long as she is in Dearborn, subject to the whims of the Honorable Mark W. Somers).

***NOTE*** Since I am making comments critical of a United States Judge, I want to make it perfectly clear that my comments and thoughts here are my own, based on my observations at our trial and the legal motions I have read. I have not consulted anyone else in writing this blog post. Any concerns about my comments should therefore be directed towards me.
Posted by David Wood at 6:45 PM

Did the judge actually admit in the pretrial phase that the policeman had a right to order Negeen to stop filming if and _only if_ he had probable cause to believe that she had committed some other crime?

That's surprising, because the police officers I've seen discussing these laws on message boards imply that there are all these other circumstances--e.g., a person walking into a dangerous situation without realizing it, for example--where a person who has committed no crime needs for his own safety to be able to be ordered around by the police. Hence they want and claim that such laws give them the power to order citizens around even where there is no probable cause to believe that the citizen has committed a crime. The "lawful performance of his duty" is a phrase that might help here, as the laws I was seeing usually referred instead to his issuing "lawful orders," which is a bit different. Still, I imagine that when the judge gave that cute little lecture at the end, this was exactly what he was implying: "Hey, for your own safety, my dear, blah, blah, whenever a policeman tells you something like 'Put that down!' 'Don't touch that!' 'You can't stand there; you have to move along,' the policeman's great wisdom should be assumed and you should obey him immediately, because he may have important reasons you don't know, blah, blah..." In other words, it sounds like the judge was thinking _exactly_ like these policemen on the message boards.

Which is why it surprises me that he would have admitted in the lead-up to the trial that probable cause against Negeen was needed to make the officer's actions lawful.

This is truly sickening, is there any way to appeal this?

I don't know if there are other situations where a police officer can order a person to stop filming. I'm saying that, based on the trial (my understanding at least), the justification for detaining Negeen was that the officer had probable cause. So, based on the judge's ruling, the officer's actions were acceptable, since he had probable cause for thinking that she had committed a crime. But Kapanowski admitted that filming in public isn't a crime, and that he had no reason to believe that Negeen had committed a crime. So the charge should have been thrown out.

Hi guys,
Wherever I have lived, I have seen this kind of behavior. Judges are lost people who needs Jesus also.

It is totally clear to me, that the Judge wanted to save the police department's face from suffering public reproach. He also wanted to cover the police's back. THAT IS ALL he wanted to accomplish.

I did find one news story which I can't now seem to find again in which some town had one of these failure to obey ordinances, and something like 70% of the charges were getting thrown out, so the police department was issuing new guidelines to the police. One of the guidelines was exactly this "probable cause" thing--that they couldn't charge someone with failure to obey unless they had approached him expecting that they would be arresting him for something else. It sounded like some of the police weren't too happy about it, but someone in the system had decided that they were charging too many people with "failure to obey." If I can find the link again, I'll post it. I will say though that the fact that this was a voluntary guideline that that department was issuing shows that this is apparently a grey area in the minds of the police--when do they have the authority to issue orders and when don't they? I'm afraid some really do have the idea that whatever _they_ think is a sufficient reason automatically is one and can never be questioned. So here we have a blatant case where obviously he had an underhanded reason for wanting her to stop filming--the conspiracy to arrest you guys and not wanting her record of it--and still acts like his judgement can't be questioned.

The cross-questioning of Kapanowski must have been interesting to watch. What possible excuse could he give for telling Negeen to turn off the camera? If he tried to say that she was in grave danger because a crowd was going to attack her if she kept filming, he'd be shown to be a liar from the videotape itself.

Negeen should not have to walk around with a criminal record, when she has done nothing wrong. I pray that her appeal will go well!

Let us face the facts:

When you have judges protecting FALSE ARRESTS and FALSE WITNESSES, you can't expect anything good from it.

SHAME ON YOU Dearborn Justice system.

Nageen im praying for you....And please know that the Lord will never leave you or forsake you no matter what situation ur in. Jesus bless.

I pray that the strong arm of our God deliver you from the hands of the enemy. I pray that Peace of our Lord Jesus be with you during this time and may you continue to Glorify God and witness our Lord Jesus.
Those who put faith in Him will never be ashamed.
God Bless you all
ned