Thanks to Glenn for taking the time to clarify our position. We've never claimed that all Christians in Dearborn are being harassed by police. We've claimed that some Christians are being harassed, and that security and police pay special attention to Acts 17, because of our combined characteristics. Glenn put together the following Venn Diagram. Each circle represents the total population with the named characteristic. The overlap areas represent people who combine those characteristics. 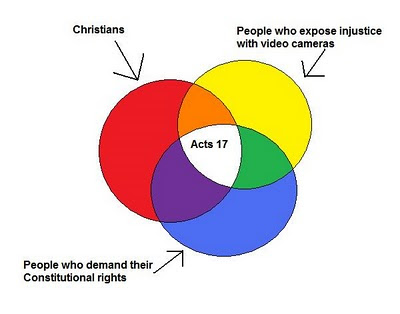 I invite our readers to pass this post on whenever someone employs the "but other Christians weren't harassed, so you weren't either" response.
Posted by David Wood at 3:47 PM

My (limited) artistic skills are at your disposal :)

Hello everyone, I would like ur opinion and answer to this question that i was asked by a muslim......
I was talking w/ her abt islam and Jesus when she brought up the subject that, Jesus isn't God b/c Jesus was tempted and since God can't be tempted Jesus can't be God.
I been thinking on how to answer that question/statement without confusing her. English is her second language so.....i'm gonna need all of u guys's help!
Just write how u guys will answer that question and i'll either take your response (with ur permission)and explain it to her or take bits and [pieces from all ur responses and clarify it for her.
Thanks in advance and Jesus bless.


P.S. She loves Jesus very much, she's just confused abt Him being God!!!!

"Let no one say when he is tempted, 'I am being tempted by God"; for God cannot be tempted by evil, and He Himself does not tempt anyone. But each one is tempted when he is carried away and enticed by his own lust. Then when lust has conceived, it gives birth to sin; and when sin is accomplished, it brings forth death." James 1:13-15

The word "tempted" has two meanings. It can mean (1) drawn by a sinful desire toward something that one ought not do; but it can also mean (2) presented with an opportunity to do something one ought not do, but not necessarily being inclined to do it.

Jesus was tempted in sense (2). He had no sinful desires, but he was presented with the opportunity to do wrong. For the rest of us, situations like (2) are often situations like (1) as well. But not for Jesus.

I think that distinction, if you can make it plain to your friend, will answer her question.

I'm always intrigued by that question.
Allow me to share my thoughts. (May someone correct me if I'm mistaken)

First of all, we Christians (as you would know) believe that Jesus is fully God. But let's not forget that He came to earth fully man as well.
As God, He cannot be tempted or fall into temptation.
But the Devil was tempting Jesus through the flesh; basically running Jesus through a (intensive, imo) 40-day temptation crash course.
Let's not forget also that He was fasting throughout that 40 days, hence we can see partly how Jesus suffered during that time.

Hebrews 4:15 tells us that although Jesus was tempted throughout the 40 days, He remained sinless and righteous before God.

Jesus triumphed over Devil with each and every temptation that the Devil threw at Him. Jesus showed He was victorious in the flesh. Where in the rest of the NT was Jesus tempted ever again by the Devil?

Hope that I have spoken truthfully and that it helped. =)

Re: Kate's question -
The question of the Incarnation makes little sense outside of the context of a redemption narrative, which is the intersection of God's love and His justice. In expressing His love for us, he demonstrates that it goes far beyond a quid pro quo - His loves us as a spurned lover, a rejected parent, an exiled king. That is, His love is such that it overcomes our rejection, our disobedience and our infidelity. It is mercy through and through; thus He comes to us as a Redeemer.

The Incarnation also is an expresses God's love in that it places in the hands of His children the ability to embrace and fulfill this redemption. In becoming "one of us", He of course suffers the death (justice) due all of humanity, but before doing so, He also demonstrates how we, too, who make up His Body can "make up what is lacking in His sufferings" by living as a faithful child, friend and servant of God even in our humanity. Thus as part of His human nature He knows sorrow, anger, temptation - even death - yet overcomes them all, assuring us all that if we allow Him to live through us, we too shall overcome these things. His resurrection is the witness that what He said about Himself - that He and the Father are one, that He has the authority to forgive sins, that He alone is the Way, the Truth and the Life - is true.

Hope that helps a little...

I was just discussing this with a few people. And you know what is really the saddest part about this whole thing.

All they had to do was have security ask David and Crew to leave. Thats it. If you guys would of refused to leave then you could of been arrested for trespassing.

But they didn't ask you to leave. Why?

Glenn and David, excellent diagram. A bit of chromatic geometry to make the situation much clearer than words alone could do. This website so often inspires admiration.

My two cents on the temptation thing: Jesus is fully God and fully man. He's not just God or just a man, and he's not half-and-half, but both. Your friend seems willing to allow that Jesus could be God, but she doesn't seem to want to bring with it that He was God in flesh. We have to affirm both at the same time, and that is why Jesus was tempted, why He appears to doubt in Gethesemane, why He cries out from the cross, why He doesn't know the hour of His return. As Zack quoted in Hebrews 4, He didn't come to earth and live as God, but lived as a man the way man is supposed to live.

So that's where I'd go; she's not going the whole way with the Incarnation, and now she just has some sort of Hindu avatar roaming Jerusalem, but not the Incarnate Logos.

I guess you get a good cross-sampling of opinions, then :P

You all have a former Muslim critic who still thinks there is video footage missing.

Satan tried on Jesus what he used against Adam & Eve; no new tricks in his book. What they succumbed to Jesus overcame. The same tricks are tried on humans by Satan. Look at advertising; the lust of the eyes/flesh/pride: When Jesus overcame these, +ians also overcome as we walk in the Spirit not the flesh. Jesus had to go through those same trials to defeat Satan. Read Rom.6:6-23

Deut.6:16 Ye shall not tempt the LORD your God, as ye tempted him in Massah.

If Jesus "is not God because He was tempted, and God can't be tempted by man;" how do they explain Deut. 6:16! Read Tim's post again.

Get your friend to read Isaiah 53 and ask her, who is it about.

Hussein Wario (No relation to Mario's antagonist) is nutty. He called in to The Dividing Line (mp3 available here) and had a difficult time being honest and coming to terms with some pretty simple, self-evident matters regarding Ergun Caner.

I commented on his blog just to see what kind of a response I'll get. Just a bunch of questions really. Oh well, what can you do?