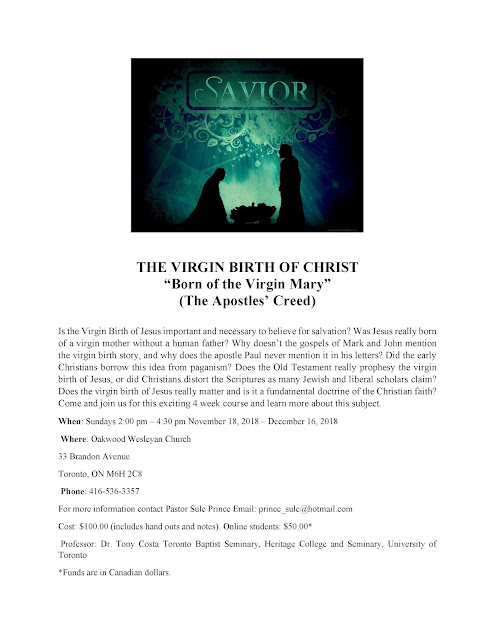 The Virgin Birth of Jesus has been believed by Christians for 2000 years. Muslims also believe in the Virgin Birth of Jesus as it is taught in the Qur'an (chapters 3 and 19), and have used this area of agreement to argue that the Islamic Jesus is the same Jesus Christians believe in. Nothing could be further from the truth. There is no doubt that Muhammad learned and knew of the Virgin Birth from Christians he came into contact with. One major problem is that many of the sources he had access to were all historically worthless as they were apocryphal documents written in the second century A.D. and later. This doctrine of the Christian faith is a fundamental one which has been attacked by liberal critics and others. So important was this doctrine that it appeared in the Christian creeds like the Apostles' Creed and the Nicean Creed. As Christmas is around the corner, this timing of this course is ideal.

I will be teaching a 4 week course (4 Sundays) on this doctrine and how as Christian believers we can be equipped and respond to the critics. The course begins November 18 and runs until December 16. Those living outside of Toronto, Canada can take the class on-line via Zoom. The course fee for those joining online is $50 (Canadian dollars). Registration information is available above. On-line registration will we available soon and I will post the link on this site.
Posted by Tony Costa at 1:13 PM

When student purchases Persuasive Essay Services from our firm, we strive to ensure that their identities are concealed and their data is in proper storage and away from free sites. All students who seek to access Custom College Research Papers should contact our support team for assistance and purchase our services to attain better grades and learn writing from our authors.