Psalm 2, and its Messianic Implications 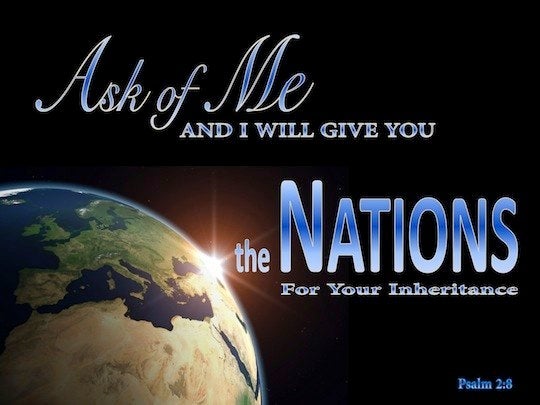 Psalm 2 is a well-known Psalm that is often quoted or alluded to in the New Testament. Until recently, I had always understood this Psalm to be an inauguration hymn whose primary application is David, but which then is applied secondarily to the Messiah by the New Testament authors as they communicate Christ's reign as the re-establishment of the Davidic monarchy. More recently, however, I have come to understand this Psalm's primary application to be the Messiah.

As always, the text of this Psalm is worth reproducing in full. I have taken the liberty to replace "LORD" and "Lord" in the English translation with the tetragrammaton "YHWH" ("Yahweh") and "Adonai" respectively, since these two Hebrew words appear in the original text:


Why do the nations rage and the peoples plot in vain? 2 The kings of the earth set themselves, and the rulers take counsel together, against YHWH and against his Anointed, saying, 3 “Let us burst their bonds apart and cast away their cords from us.” 4 He who sits in the heavens laughs; Adonai holds them in derision. 5 Then he will speak to them in his wrath, and terrify them in his fury, saying, 6 “As for me, I have set my King on Zion, my holy hill.” 7 I will tell of the decree: YHWH said to me, “You are my Son; today I have begotten you. 8 Ask of me, and I will make the nations your heritage, and the ends of the earth your possession. 9 You shall break them with a rod of iron and dash them in pieces like a potter's vessel.” 10 Now therefore, O kings, be wise; be warned, O rulers of the earth. 11 Serve YHWH with fear, and rejoice with trembling. 12 Kiss the Son, lest he be angry, and you perish in the way, for his wrath is quickly kindled. Blessed are all who take refuge in him.

It is often understood that verse 7-9 is King David speaking. But observe who the speaker is in verse 5-6. It says "Then he [i.e. Adonai referred to in verse 4] will speak to them in his wrath, and terrify them in his fury, saying 'As for me, I have set my King on Zion, my holy hill.'" There is no indication in the text that the speaker changes between verse 6 and 7 from Adonai to David (note that the quotation marks are not in the original Hebrew text). In verse 7a, we read, "I will tell of the decree: YWHW said to me..." Thus, here we see a conversation taking place between Yahweh and Adonai. This should remind us of another Psalm which reports a conversation that we see taking place between Yahweh and Adonai -- Psalm 110, a Psalm which speaks of the divine-human Messiah (yes, I am aware that Psalm 110:1 says Adoni instead of Adonai, but see my article here on why this doesn't put a dent in the argument for interpreting the individual at Yahweh's right hand as Adonai).

Consider the parallels between what follows in Psalm 2, and the text of Psalm 110.


Psalm 2:9a: "You shall break them with a rod of iron."
Psalm 110:2: YHWH sends forth from Zion your mighty scepter. Rule in the midst of your enemies!

Psalm 2:9b-12: "...and dash them in pieces like a potter's vessel.” 10 Now therefore, O kings, be wise; be warned, O rulers of the earth. 11 Serve the YHWH with fear, and rejoice with trembling. 12 Kiss the Son, lest he be angry, and you perish in the way, for his wrath is quickly kindled.
Psalm 110:5b-6 he will shatter kings on the day of his wrath. 6 He will execute judgment among the nations, filling them with corpses; he will shatter chiefs over the wide earth.

As you can see, there are striking parallels between those two texts. This suggests that there is a unity between Psalm 2 and Psalm 110. Given that Psalm 110:5 identifies the one seated at Yahweh's right hand (and the one to whom Yahweh speaks) as Adonai, the most natural interpretation of Psalm 2 is also that Yahweh is speaking to Adonai. Note that, although Yahweh and Adonai are equivalent titles that denote absolute deity, Scripture sometimes uses two different titles of deity in order to distinguish between persons of the Triune godhead (we saw this previously when I discussed Deuteronomy 32, where the titles of "the Most High" and "YHWH" are used).

There is yet another reason for taking this individual spoken of in Psalm 2 to be a divine person.
Consider verse 8:


Ask of me, and I will make the nations your heritage, and the ends of the earth your possession.

The individual spoken of here in Psalm 2, therefore, is going to receive the nations as his heritage. But what do we read in Psalm 82:8?


Arise, O God, judge the earth; for you shall inherit all the nations!

Thus, the one who judges the earth with a rod of iron and who inherits all the nations according to Psalm 2 is the individual to whom Yahweh is speaking. But according to Psalm 82, it is God who will fulfill this role. Thus, again, we see reason for understanding Psalm 2 to refer to a divine Messiah.

This, of course, also raises the question as to who God is inheriting the nations from, since surely the nations are already his possession. This is illuminated in view of the New Testament revelation of the Trinity. Consider, for example, the words of Jesus in Matthew 11:27:


“All things have been handed over to me by my Father.”


“All authority in heaven and on earth has been given to me.”

The references to God receiving the nations as his inheritance also connects with Deuteronomy 32:8-9:


8 When the Most High gave to the nations their inheritance, when he divided mankind, he fixed the borders of the peoples according to the number of the sons of God. 9 But the Lord's portion is his people, Jacob his allotted heritage.

I discussed the full significance of this text in a previous blog post.

There is also another interesting feature of Psalm 2. In verse 7, we read, "You are my Son; today I have begotten you." In what sense is it referring to Adonai as "Son"? The title of “Son” is not being used here in the sense of the Messiah being the eternal Son in relation to the Trinity. The Davidic heir is identified in Scripture as God’s “Son” (e.g. see 2 Samuel 7:12-16). By identifying Adonai as God’s “Son”, Psalm 2 takes Adonai to be the heir of David.

Thus, once again, we are left with a divine-human Messiah, a consistent theme throughout the Hebrew Bible.
Posted by Jonathan McLatchie at 10:16 AM

Thanks For The Content..Really Good