The Trinity in Acts 2: A Refutation of Dale Tuggy 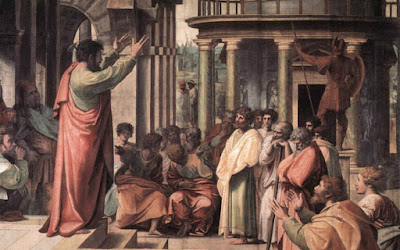 Biblical Unitarian Dale Tuggy published an article at his blog in which he argues that belief in the doctrine of the Trinity and deity of Christ are not definitional to the gospel, and are not essential for salvation. After all, Tuggy, points out, Peter in his proclamation to the Jews in Acts 2 makes no mention of those doctrines.

Tuggy's argument fails for a number of reasons. For one thing, Peter's sermon in Acts 2 also makes no mention of Christ's death being an atoning sacrifice for our sins. Extending Tuggy's logic further, therefore, would require also abandoning that doctrine as definitional to the gospel.

The second problem is that, while Peter's sermon (being addressed to a Jewish audience) does not use the philosophical categories that would be developed later to convey the idea of the Trinity, Peter's sermon is thoroughly Trinitarian. Consider verses 16-21, in which Peter quotes from Joel 2:


But this is what was uttered through the prophet Joel: “‘And in the last days it shall be, God declares, that I will pour out my Spirit on all flesh, and your sons and your daughters shall prophesy, and your young men shall see visions, and your old men shall dream dreams; even on my male servants and female servants in those days I will pour out my Spirit, and they shall prophesy. And I will show wonders in the heavens above and signs on the earth below, blood, and fire, and vapor of smoke; the sun shall be turned to darkness and the moon to blood, before the day of the Lord comes, the great and magnificent day. And it shall come to pass that everyone who calls upon the name of the Lord shall be saved.’


This Jesus God raised up, and of that we all are witnesses. Being therefore exalted at the right hand of God, and having received from the Father the promise of the Holy Spirit, he has poured out this that you yourselves are seeing and hearing.

Thus, the one who has poured out the Spirit, according to Peter, is Jesus Himself! Peter thus has identified Jesus as none other than Yahweh. Jesus, moreover, is clearly distinct from the Father, since Peter says that He has "received from the Father."


And it shall come to pass that everyone who calls upon the name of the Lord shall be saved.

And yet what does Peter state in verse 38?


Repent and be baptized every one of you in the name of Jesus Christ for the forgiveness of your sins, and you will receive the gift of the Holy Spirit.

Thus, while Peter has quoted Joel as saying that all who call upon the name of Yahweh will be saved, he goes on to instruct the people to repent and be baptized in the name of Jesus Christ.


This Jesus is the stone that was rejected by you, the builders, which has become the cornerstone. And there is salvation in no one else, for there is no other name under heaven given among men by which we must be saved.

Again, the name given by which we must be saved is that of Jesus.

We thus have clear evidence in this text that Peter is proclaiming the deity of Jesus. But what of the Holy Spirit? In Acts 2:17, Peter has quoted God in the book of Joel as saying "I will pour out my Spirit on all flesh." What properties would the Holy Spirit have to possess in order to simultaneously be poured out on all flesh all over the world? Clearly, omnipresence, an attribute of deity.

The book of Acts actually affirms the deity and personal identity of the Holy Spirit a number of times. For example, in Acts 5:3-4, we read,


But Peter said, "Ananias, why has Satan filled your heart to lie to the Holy Spirit and to keep back for yourself part of the proceeds of the land? While it remained unsold, did it not remain your own? And after it was sold, was it not at your disposal? Why is it that you have contrived this deed in your heart? You have not lied to man but to God.”

Acts 5:32 also has another affirmation of the personal identity of the Holy Spirit:


And we are witnesses to these things, and so is the Holy Spirit, whom God has given to those who obey him.”

Thus, the Holy Spirit is a witness in the same sense that the apostles were witnesses. This again strongly implies the personal identity of the Holy Spirit.

The Holy Spirit is identified as both divine and personal in Acts 13:2:


While they were worshiping the Lord and fasting, the Holy Spirit said, “Set apart for me Barnabas and Saul for the work to which I have called them.”

The personal identity of the Holy Spirit also comes through in Acts 15:28 at the Jerusalem council:


For it has seemed good to the Holy Spirit and to us to lay on you no greater burden than these requirements.

Another affirmation of the deity of the Holy Spirit occurs in Acts 28:25-27:


And disagreeing among themselves, they departed after Paul had made one statement: “The Holy Spirit was right in saying to your fathers through Isaiah the prophet: “‘Go to this people, and say, “You will indeed hear but never understand, and you will indeed see but never perceive.” For this people's heart has grown dull, and with their ears they can barely hear, and their eyes they have closed; lest they should see with their eyes and hear with their ears and understand with their heart and turn, and I would heal them.’

In conclusion, we have seen that, contrary to Dale Tuggy's assertions, Peter's sermon in Acts 2 is profoundly Trinitarian.
Posted by Jonathan McLatchie at 6:46 PM

Email ThisBlogThis!Share to TwitterShare to FacebookShare to Pinterest
Labels: Deity of Christ, Trinity

Thanks for this, Jonathan. I'm sorry to say, though, you're relying on some fashionable but fallacious inferences, and on the ambiguity of the term "trinitarian." I explain fully here: http://trinities.org/blog/mclatchie-argues-that-acts-is-trinitarian/

I see a lot of eisegesis and no trinity in Acts 2. Tell me how you count three and that somehow makes "one God"? Show me the definition of "God" in any text in Acts that shows all 3 are this one God?

Do you think Cyrus is also YHWH? Have you read Isaiah 45 closely my friend?

I also take notice, your blog is called Acts 17 ironically. How closely have you read that preaching by Paul in the Areopagus? Who is the one and only God in Paul's preaching?

I listed a few more passages in the book of Acts which support Trinitarianism in my comments at Steve Hays' blogpost here: https://triablogue.blogspot.com/2017/06/unitarian-weasel-watch.html.

What would be the worth of an exceptional man suffering on the cross? Nothing, think about that.

Yes. And do you know how biblical unitarians understand that passage?

My late mother never go into details on trinitrian as you do because she was uneducated and all she has is faith.

"Biblical unitarian" is an oxymoron since Matthew 28:19 is a clear statement of the trinity. To conflate Father Son and Holy Spirit is to say they are all God.