The Rising Price of a Slave: Another Method of Corroborating Biblical History

The following graph is excerpted from figure 43 of K.A. Kitchen's book, On the Reliability of the Old Testament, and can be found on page 643. It shows the rising average price of slaves throughout 2000 years. Another graph, running alongside, shows the Biblical records of the price of a slave at three distinct Biblical time periods. 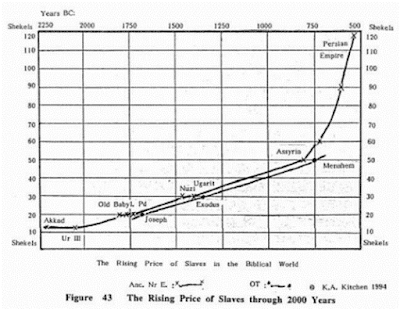 The first of those is at the time at which Joseph was sold by his brothers into slavery. Genesis 37:28 tells us,

Then Midianite traders passed by. And they drew Joseph up and lifted him out of the pit, and sold him to the Ishmaelites for twenty shekels of silver. They took Joseph to Egypt.

The next Biblical time point marked in our graph is the time of the Exodus out of Egypt. If we look at Exodus 21:32, we are told,


If the ox gores a slave, male or female, the owner shall give to their master thirty shekels of silver, and the ox shall be stoned.

In fifteenth century Nuzi and fourteenth and thirteenth century Ugarit, the average price of a slave reached as high as 30 shekels and more. Hence, we see the replacement money that must be paid to the owner, according to Exodus 21:32, given as 30 shekels.

In the first millennium, B.C., the average price of a slave rose as high as 50 to 60 shekels. The Biblical record tells us the redemption price that Menahem had to pay Assyria in the eighth century B.C. Here is what we read in 2 Kings 15:20:

Thus, as K.A. Kitchen explains (On the Reliability of the Old Testament, p. 345),

If the events were being made up centuries later then it would be very difficult for a forger to check the relevant price of slaves at the time of the events he was narrating. This is the sort of thing where it would be very easy for a forger to err, given the rapidly climbing average price of a slave throughout history. This pattern of evidence suggests that the events are being recorded in close proximity to the time and place.
Posted by Jonathan McLatchie at 10:42 AM