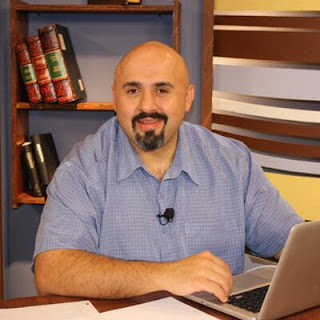 As readers of this blog will probably know, I run a weekly webinar series called the Apologetics Academy. Each week, I bring in a different specialist (representing positions across the theological and philosophical spectrum) to talk about topics of interest to Christians. There is always plenty of opportunity for audience participation and discussion. The idea is to provide Christians with the opportunity to interact one-on-one with a top scholar or apologist that they probably would otherwise never have access to. Bringing in non-Christian guests also provides a unique opportunity for Christians to practice their skills in defending the faith against some of the best objections. The currently confirmed speaker line-up can be found at this link.

Participants can engage the speaker using live audio and video, submit questions anonymously, participate in the chatbox, or simply watch and listen anonymously.

This coming Saturday (June 11th), we are going to be in conversation with Sam Shamoun (of Answering-Islam.org) on Islam's deification of Muhammad. To help prepare, Sam recommends reading the materials available at this link.

Doing so will immediately prompt you to download and install the Webinar platform we use, called Zoom. This should take at most a minute or two.

I hope to see plenty of you there! All are welcome, Muslim and Christian alike.
Posted by Jonathan McLatchie at 11:34 AM

Sam , when will you debate Shabir Ally ?

Hello Jonathan,
Do you record the discussions? I would love to listen in live, but usually would be unable to. Perhaps there are also others around the world (I'm in Australia) who would also appreciate being able to listen to the sessions at a later/more convenient time.
Sincerely,
Lorraine Zinnack
Kangaroo Island, Australia.

It is obvious that Allah, the moon god of the Meccans, was usurped by Muhammad and re-created in his own (Muhammad's)image.

Allah for all practical purposes is Muhammad.

The Quran repeatedly exhorts believers to "Obey Allah and his messenger". Never does "Allah" exhort people to obey him without ALSO exhorting them to obey Muhammad.

In one verse, however, he forgets to tell people to obey him and merely commands them to obey Muhammad, in order to "find mercy".(24:56)

Obey Muhammad and you obey Allah 4:80, "He who obeys the Messenger, obeys Allah..' One and the same thing. Not surprising because they are one and the same.

There is no distinction between Allah and Muhammad 4:150-151

You cannot be a Muslim by merely believing in Allah, you have to believe in Allah AND Muhammad.48.29, which also tells Muslims to be harsh to unbelievers as opposed to merciful among themselves.

I've been saying that Muslims deify Muhammad and got a lot of flack from Muslims about this on a YouTube video. But my premise was how do they not deify him, it's just words of denial but their actions say otherwise? They murder innocent people for mocking him, there are blasphemy laws set up in Muslim lands that prohibit criticism of him and punishable by death. To top it off, the video that sparked the debate was a spoken word video where a Muslim speaks of Muhammad in a way where he is praising him much like Christians praise Christ. I even think the phrase "there is no God but Allah and Muhammad is his messenger " does in fact assign partners to Allah unknowingly and is inconsistent. Whenever Muslims speak of Allah, soon to follow is a reference to Muhammad and a "pbuh".

Hello Jonathan,
Do you record the discussions? I would love to listen in live, but usually would be unable to. Perhaps there are also others around the world (I'm in Austria) who would also appreciate being able to listen to the sessions at a later/more convenient time.
Sincerely,
Johann Riedler
Graz, Austria.

Prophets of the Old Testament are non-entities compared to the status to which Muhammad has been elevated. They, unlike Muhammad, did not require any confession of faith in their own credibility or status such as "There is no god but YHWH and Moses is the prophet of YHWH".

The message of these prophets required the Israelites only to obey the Law, it did not require the Israelites to love Moses or any other prophet more than they loved themselves.

Narated By 'Abdullah bin Hisham : We were with the Prophet and he was holding the hand of 'Umar bin Al-Khattab. 'Umar said to Him, "O Allah's Apostle! You are dearer to me than everything except my own self." The Prophet said, "No, by Him in Whose Hand my soul is, (you will not have complete faith) till I am dearer to you than your own self." Then 'Umar said to him, "However, now, by Allah, you are dearer to me than my own self." The Prophet said, "Now, O 'Umar, (now you are a believer)." ►Bukhari Volume 008, Book 078, Hadith Number 628.

Muhammad was clearly a prophet unlike Moses or any other prophet of the Old Testament, for he was a profit of a different calibre.

The first pillar of Islam itself already involves Muhammad. "There is no god but Allah AND Muhammad is his messenger." Muhammad has to be there with Allah all the time. Islamic car banners with the Syahada written on them always has the Arabic writing "Allah" on the right and the accompanying writing "Muhammad" on the left. Always. In the same size font.

When I think of Muhammad and Allah I always picture the Batman villain the Ventriloquist and his puppet Scarface, in those respective positions. Even Aisya the child bride of Muhammad was not stupid enough to miss that when she said Allah only seemed to hasten to grant Muhammad his desires. That's because Muhammad always hastened to grant Muhammad's desires.

Hello Sam, I just want to say how much I enjoy your regular demolitions of Paul Williams and his cronies.

parating 2 previous posts, are you going to post this discussion for those of us who missed it live.