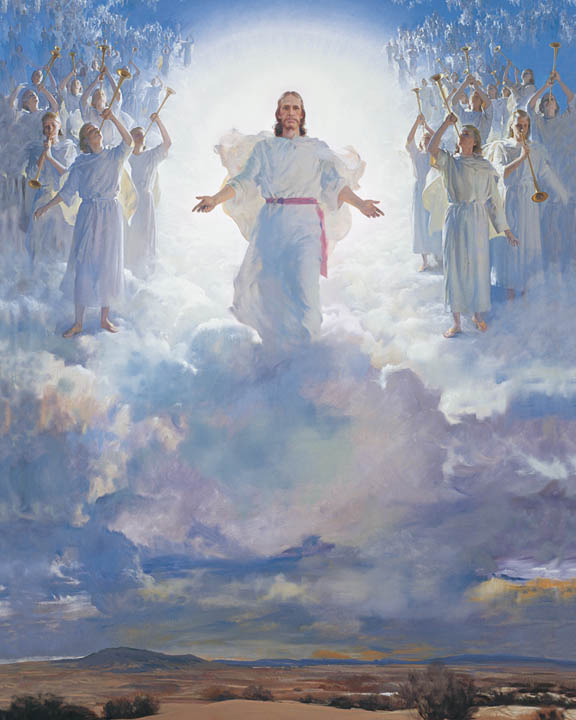 Jesus’ favourite self-designation in the gospels is the title “Son of Man”. In the narrative of Jesus’ trial, Jesus connects this title with the image of “coming with the clouds of heaven”, thus drawing our attention to the prophetic text of Daniel 7:13-14:


“I saw in the night visions, and behold, with the clouds of heaven there came one like a son of man, and he came to the Ancient of Days and was presented before him. And to him was given dominion and glory and a kingdom, that all peoples, nations, and languages should serve him; his dominion is an everlasting dominion, which shall not pass away, and his kingdom one that shall not be destroyed.”

A typical Jewish interpretation of this text in Daniel is that the Son of Man is actually a personification of the nation of Israel. Jewish apologists draw support for this interpretation from the interpretation of Daniel’s entire vision given in verses 15-22 of the same chapter, and in particular verses 18, 22 and 27: “But in the end, the holy people of the Most High will be given the kingdom, and they will rule forever and ever… until the Ancient of Days—the Most High—came and judged in favor of his holy people. Then the time arrived for the holy people to take over the kingdom.… Then the sovereignty, power, and greatness of all the kingdoms under heaven will be given to the holy people of the Most High. His kingdom will last forever, and all rulers will serve and obey him.”” Thus, it is argued, the Son of Man in verses 13-14 actually refers to the “saints of the most high”, not the Messiah. This is the argument presented in a recent video by Muslim YouTube polemicist Yahya Snow claiming to offer a refutation of my claim that the "Son of Man" was used by Jesus as a divine title.

The clip that Yahya Snow played of me was from an old radio debate of mine, at a point at which I was asked to give an example where Jesus self-identified as God. I cited Jesus' self-designation as "Son of Man" and its clear ties to Daniel 7:13-14. Here, it is less important how the text was originally intended by its author to be interpreted and more important how Jesus Himself understood it and his intent in applying the title to Himself. Clearly, Jesus did not understand the title "Son of Man" in Daniel as a reference to the nation of Israel (unless one is seriously going to contend that Jesus considered Himself to be the whole nation of Israel). Jesus clearly understood the title as a title of deity.

It cannot be denied that the earliest exegetes of this text understood the “Son of Man” to be a Messianic reference, rather than simply a reference to the Nation of Israel. Indeed, in apocalyptic literature such as 1 Enoch 37-71, 4Q246 from the Qumran scrolls, the gospels and book of Revelation, and the post-70 A.D. 4 Ezra, the "son of man" has an explicitly Messianic interpretation.

That Jesus' use of the "Son of Man" title is a self-reference is clear from passages such as Luke 22:48 (“Judas, would you betray the Son of Man with a kiss?”) and Mark 2:10 ("But that you may know that the Son of Man has authority on earth to forgive sins..."). In How God Became Jesus: The Real Origins of Belief in Jesus' Divine Nature (pp. 63-64), Michael Bird notes that,


"Jesus spoke Aramaic, and in Aramaic bar enash can have a generic meaning of "humanity", an indefinite sense of "a man" or "someone", or a definite connotation of "this man." Jesus seems to have used the Aramaic idiom as a form of self-reference, to designate himself as the person in question, or at least one within a particular class of people. In this case, Jesus probably employed bar enash in some instances as a form of self-references."

Bird draws our attention to Luke 9:58 / Matthew 8:20 where Jesus says "Foxes have dens and bids have nests, but the Son of Man has no place to lay his head", in addition to Luke 7:33-34 / Matthew 11:18-19 where Jesus says "John the Baptist came neither eating bread nor drinking wine, and you say, "He has a demon." The Son of Man came eating and drinking, and you say, "Here is a glutton and a drunkard, a friend of tax collectors and sinners.""  In those texts, Bird notes, "we clearly have Son of Man" used by Jesus as a form of self-reference, and it makes perfect sense in Aramaic as meaning something like "this man." Bird argues that these sayings are most likely authentic because it seems unlikely that someone in the early church "would invent the taunt of Jesus as a glutton and a drunkard, or celebrate Jesus' homelessness." It might be added to that that these sayings are both found in the Q material (both occur in Matthew and Luke but not Mark), suggesting an early origin. A further reason for thinking that the Son of Man title is probably an authentic reference used by Jesus is the use of it in John's gospel as well as the Synoptics (thus giving independent attestation). It also fulfils the criteria of dissimilarity, since it is not a title used by the earliest church for the first 120 years and yet it occurs very frequently as a self-designation by Jesus in the gospels.


As scholars, such as John J. Collins, have rightly pointed out, certain literary parallels exist between the “son of man” vision of Daniel 7:13-14 and the Canaanite Baal myth. For example, Baal is referred to frequently as “rider of the clouds”, which resembles the manner in which, in Daniel’s vision, the “son of man” was seen to come on the clouds of heaven. Moreover, the high god El is depicted as an aged deity who is often referred to as the “father of years”, similar to the title ascribed to Yahweh in Daniel 7:13-14 – the “ancient of days”. Further, the “son of man” is portrayed in Daniel 7:13-14 as being in subordination to the “ancient of days”, which also parallels the Canaanite myth in which Baal, the subordinate deity, receives kingship from the high god El following the defeat of the god Yamm in battle. Yahweh, the God of Israel, is ascribed the title of cloud rider on several occasions in the Old Testament:
The Biblical prophets thus appear to have taken this title – a title that was widely recognized as an official title of Baal – and applied it to Yahweh in some capacity. The fact that the son of man is described as being the cloud rider in Daniel 7:13-14 suggests his identification with the same essence as Yahweh Himself, and yet being a person separate and distinct from the “ancient of days” (a concept that prefigures the New Testament revelation of the Trinity).

Why might the Hebrew prophets have borrowed from the Baal myth to communicate truths about the God of Israel? In the northern kingdom of Israel, Jeroboam religion had borrowed from Baal worship and it may have begun to look as though there was no difference between Baal and the God of Israel. It is thus hardly surprising that the prophets at times counted on the familiarity with Baal to present their argument that it was in fact Yahweh, not Baal, who is the king of heaven. This is most plainly seen in their giving credit to Yahweh for sending the rain and making the crops grow – things for which the Baal cycle would give credit to Baal. 1 Kings 17-18 even portrays a duel between the two rain-givers, Yahweh and Baal, observed by Elijah and the prophets of Baal – a duel which Yahweh demonstrates his superiority over Baal.

It also bears noting that the Greek Septuagint translation of Daniel 7:14 uses the Greek word Latreuo when describing the service that is to be rendered to the “Son of Man”. Latreuo denotes the very highest form of worship and religious service, a kind that is to be ascribed only to Yahweh. This again suggests that the “Son of Man” refers to more than a mere human being. Moreover, it would certainly be rather odd if the text was saying that religious service was to be rendered to an entire nation rather than an individual. I submit that the simplest and most consistent way of putting all of this information together is to understand the Son of Man to be the representative of the Saints of the Most High. If verse 22 (“His kingdom will last forever, and all rulers will serve and obey him”) is taken to refer to the “Most High”, then the Son of Man is also identified as the “Most High.” If, on the other hand, it is interpreted to refer to the collective people of Israel, this would seem odd, since other Scriptures speak of God’s Kingdom lasting forever and ever.

Yahya Snow concludes his video polemic by claiming that I "may well have been indoctrinated with this superficial and misleading spin in [my] youth." It is Yahya Snow, however, who is guilty of a rather less than deep analysis of the evidence pertinent to both Jesus' use of Daniel 7:13-14, and the original connotations of the text.
Posted by Jonathan McLatchie at 10:31 AM

Thanks again for your very good work, which is very informative and encouraging.

Jonathan, I do not seem able to find the term 'latreuo' in my Greek Septuagint translation of Daniel 7:14. The verse reads:

The words without brackets are the transliterations of Greek into English. The brackets contain translations from Greek to English.

As we can see, the word 'latreuo'cannot be found in the above text.

Any comments would be most welcome.