Zakir Naik Fan Asks if He Should Behead Me

"Erick Setiawan" goes from "I have a question" to "Should I kill them?" in the space of three comments.

First, after searching for Zakir Naik videos, he watches my video "Zakir Naik Proves That Jesus Is Muhammad's God!" He then proceeds to criticize the deity of Christ and to show by his objection that he has no clue what he's talking about.

Next, "Erick" sees my "Who Killed Muhammad?" video in the sidebar. He clicks on the video, and, in response to my careful argumentation, calls me a racist.

Finally, after watching this video, he sees my video about Caliph Uthman burning all known copies of the Qur'an ("The Original Burn the Qur'an Day"), and he asks if he should behead Nabeel and me.

Pretty impressive to go through all Three Stages of Islamic Denial (criticize, pull race card, threaten) so quickly. The shocking part is that Erick didn't learn peace and tolerance from his play list, which is filled with Zakir Naik videos. 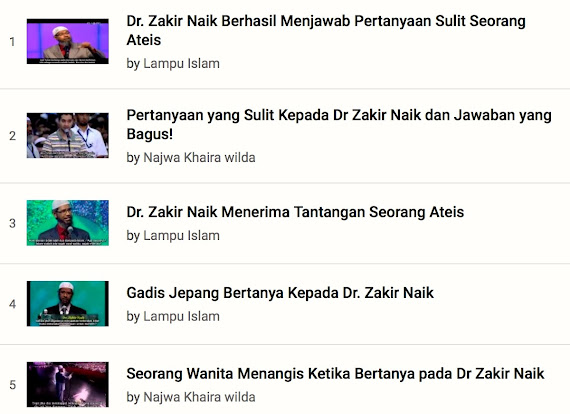 Clearly a guy who needs to learn more about Islam in order to refute and educate others.

Something about Islam that turns Muslims into crazed fanatics ready to "chop off heads" every time their religion is attacked. It is called, "upon-closer-scrutiny-I-cannot-cleverly-defend-my-religion-and-therefore-I-will-chop-off-heads". Cue Surah 5:33.

Erick Setyawan is a typical indonesian muslim.. usually they're bragging ,appearing & claiming to be 'moderate' but in reality full of hatefulness inside

Why is it that they don't think if there is some truth in what you say, especially when the Islamic sources stated as Sahih are being quoted? Dear Holy Spirit, open their eyes to your truth, please take away the veils which prevent them from seeing your truth in all its beauty....

Mr. Snow says ".....Clearly a guy who needs to learn more about Islam in order to refute and educate others....."

Wrong Mr. Snow, this is clearly the mentality of someone who knows that Islam has no answers and his frustration gets the best of him. No amount of" education" can ever change that.

It is a universal trend that Muslims follow and this moron is simply a chip off the old block.... Just another frustrated Muslim defending Islam the only way it can ever be defended.... i.e: threaten to kill the questioner.

The thing with Indonesian and Malaysian Muslims is this. They can be the friendliest people you have ever met...as long as you do not touch their customs or Islam. Their apparent relaxed, couldn't-care-less attitude to life and their warmth are just two sides of the same coin. Because of this, they generally do not study anything in-depth, including Islam, and whatever they know about Islam is fed to them by their imams, who themselves also were fed by their imams and so on. So when we the non-Muslims talk about Muhammad and the unfavourable things that he did or said, it comes a shock to their systems because it is also probably the first time they hear such things. Therefore the accusations of "LIES!! YOU LIAR!!" abound. And then we show them where we get such information from (i.e. we didn't make them up - they are found in the Islamic sources), that comes as a second shock, and then come the murder threats.