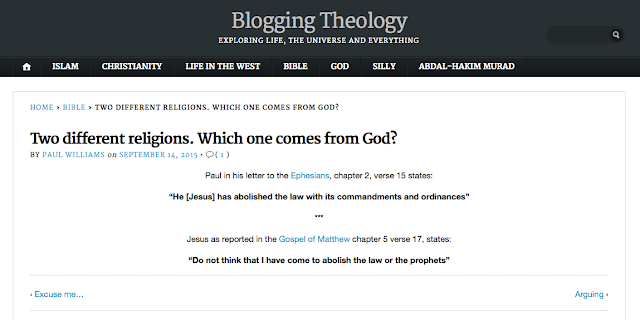 From the two statements above, one from the Apostle Paul, the other from the Lord Jesus Christ, Paul Williams has concluded that Jesus and Paul taught two mutually exclusive religions, only one of which can be from God.

By juxtaposing these two verses under the heading “Two different religions. Which one comes from God?,” Williams is implicitly assuming that Paul and Jesus are using “the law” in the same way, which is something for which Williams offers no exegetical argument. Since the word “law” and “the law” can be and are used in a whole host of ways in Scripture, something universally recognized among Biblical scholars, it is incumbent on Williams to demonstrate that Jesus and Paul are using the term/phrase in exactly the same way. In other words, Williams is relying on the ambiguity of a phrase common to the two passages, i.e. “the law,” in order to generate a contradiction, which is a logical fallacy.

There are other problems with Williams approach to these two passages, but what is particularly interesting about the above point is that Paul Williams admitted on the very next day –in a post titled “thou shalt not commit logical fallacies”– that he is “…tempted to indulge in them [logical fallacies – AR] from time to time.” Here is Williams’ confession: 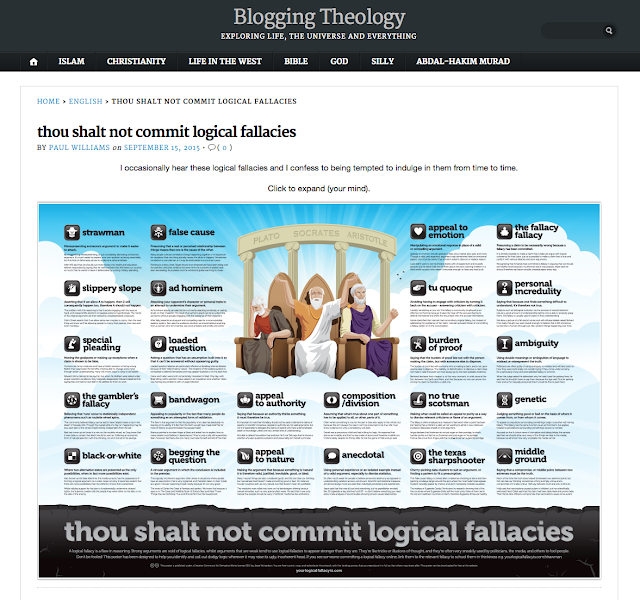 Notice that one of the logical fallacies included on the above list is the very fallacy Williams committed the day before, i.e. “the fallacy of ambiguity” (aka equivocation).

Here is the fallacy blown up: 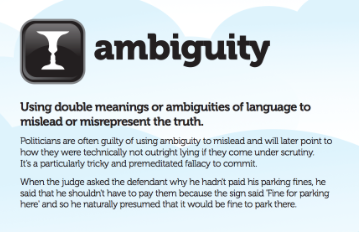 Although Williams admitted that he is tempted to indulge in logical fallacies from time to time, from what I have seen he succumbs so often that it would be more accurate to say “time after time.” In any event, here we have both a confession and clear evidence that Williams’ is not always honest in his attacks on Christianity.

I think it is high time that Williams rename his blog: Blogging Logical Fallacies.

I've talked with many Muslims about this very issue. Like most Muslims Paul Williams (is he even Muslim anymore?) strategically leaves out the end of Jesus' sentence:

"I did not come to abolish but to fulfill."

So clearly "fulfill" means: "The Law" is incorporated into the Divine Authority of Jesus Christ.

By merely believing in Jesus Christ you are abiding by "The Law". Now if there is a law like those regarding hygiene that have nothing to do with God then Jesus tells us those Laws are corrupt and therefor dropped. Not eating pork is thrown out as corrupt since it has nothing to do with God. Jesus very clearly says you can't be defiled but what you put in your mouth only by what comes out of it.

So the real issue when a Muslim brings up this hackneyed argument is that MUSLIMS ALSO BELIEVE THE JEWS CORRUPTED SOME OF THEIR COMMANDMENTS. Jesus tells us that! Muslims agree with Jesus!

Matthew 5.17 completed "I do not come to abolish it, but to fulfil." How does that fill into the Muslim native? How does a mere prophet fulfil the law?

It's also worth pointing out that Matthew 5 and Ephesians 2 use different words for "abolish", καταλῦσαι vs καταργήσας, and I do think their meaning is different. I do not know whether it is an innocent mistake or not, but I have seen many Muslims accuse the Bible of contradictions using English translations, and they really should know better given their emphasis on the Arabic of the Quran.

I just posted a comment on that blog. I just could not resist. I thought, it will probably be refused, but behold, it's there! :-)

"It's not a logical fallacy when we do it."

--every Muslim apologist ever

Doesn't a Hadith speak favorably of Paul (apostle) and his message? How can Williams try to place a wedge between apostle and Christ?

An example of what could happen:

1. An act of terrorism occurs, perpetrated by a Muslim.

2. We show non Muslims that acts of terror are sanctioned by Islam by quoting a host of violent verses from the Quran and the Hadith (say al Bukhari 6924).

3. Some Muslim "apologist" comes and says we are picking verses out of context. "Don't you know that context is very important when you quote something?" And then they pick one verse, maybe Surah 8:12, to claim that it was the Meccans who wanted to attack the Muslims in the first place (where they get this idea, I have no idea) as "context". So this is supposed to justify defensive jihad.

4. So we take them through the Sirat, which of course proves otherwise.

5. Guy goes into overdrive about Isnad and "science of Hadith" and how we can quote someone but pull it out of context, or that we can quote Ibn Ishaq all we want. So we wonder...the Sirat isn't even part of the Hadith is it? And the Isnad? Isn't that supposed to prove that a certain Hadith is "authentic"? Isn't that what I just quoted from al-Bukhari?

6. So we ask the guy to give us something MORE authentic than the Sirat to justify him saying it was the Meccans who wanted to attack first at Badr, or any other Hadith to "re-explain" things on general violence.

7. Didn't provide a single quote, but went on to say we are "acting stupid" and "narcissistic". What has narcissism got to do with it I wonder.

Also, in Ephesians 2:14-15, it is not the law per say that was abolished, but "the enmity/ hostility of the law" - that is, the laws that cause hostility and enmity between different cultures (Jews vs. Gentiles) - that enmity (hatred) also flows out into hatred of two communities (on issues like food laws and circumcision; in NT contexts, tensions between Jews and Gentiles), the context of the whole passage in Ephesians 2:11-22. So Christ abolished the laws that caused enmity between the 2 communities - "making peace, making the two groups into one new man".

All comments must be approved by the blog author? David you erased my comment? Why did you do that? David do you realize that you are acting like a muslim when you moderate comments. That is called censorship. WHAT HAPPEN TO THE RIGHT TO FREE SPEACH DAVID? WHAT A HYPROCRITE YOU ARE? You blast muslims for censoring comments and the media as well but you do the same. Yahoo doesn't censor comments.

I used to be a fan but now I am not. JESUS CHRIST WOULD HAVE NEVER CENSORED ANYONES OPINIONS. FOLLOW JESUS CHRIST YOU HYPROCRITE.

I USED TO BE A SUPPORTER BUT I SEE YOU ARE JUST AS BAD AS A MUSLIM. GOD IS THE TRINITY? THAT WHOLE CONCEPT THAT GOD IS A MAN IS DEGRADING TO WOMEN.