William Lane Craig: The Concept of God in Islam and Christianity

Here's an excellent short lecture by William Lane Craig on the concept of God in Islam and Christianity. 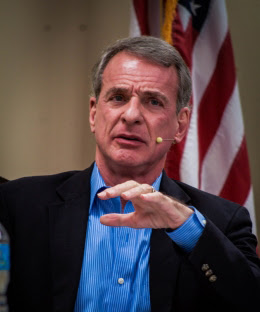 At the age of sixteen as a junior in high school, he first heard the message of the Christian gospel and yielded his life to Christ. Dr. Craig pursued his undergraduate studies at Wheaton College (B.A. 1971) and graduate studies at Trinity Evangelical Divinity School (M.A. 1974; M.A. 1975), the University of Birmingham (England) (Ph.D. 1977), and the University of Munich (Germany) (D.Theol. 1984). From 1980-86 he taught Philosophy of Religion at Trinity, during which time he and Jan started their family. In 1987 they moved to Brussels, Belgium, where Dr. Craig pursued research at the University of Louvain until assuming his position at Talbot in 1994.

He has authored or edited over thirty books, including The Kalam Cosmological Argument; Assessing the New Testament Evidence for the Historicity of the Resurrection of Jesus; Divine Foreknowledge and Human Freedom; Theism, Atheism and Big Bang Cosmology; and God, Time and Eternity, as well as over a hundred articles in professional journals of philosophy and theology, including The Journal of Philosophy, New Testament Studies, Journal for the Study of the New Testament, American Philosophical Quarterly, Philosophical Studies, Philosophy, and British Journal for Philosophy of Science.

@ Paige you are right, Devil is from inception of Islam when Muhammad received 1st surah in the cave. Thanks Salman Rushdie for his book Satanic Verse where he identified Muhammad was influenced by Satan not by Gabriel the Angel Muslims were hypnotized to believe.

We know Satan tried Jesus three times but failed. But the prince of the world succeeded with Muhammad establishing its empire by the name of Islam. The world knows today we do not need any more evidence to declare Islam a religion of evil, with peace's cloth. Evil is real and evil in contrast to Jesus convinced Muhammad to fight to get power and prestige by the name of Allah (in disguise of Satan) opposite to sacrifice of Jesus Christ to increase harvest for Kingdom of True God of Heaven.

All the converts are from criminal background to kill innocent people is another proof of devil’s act. Whereas Christian converts are changed to better form from worst. Following Jesus’ teaching “None Violent” movement devils are starving, but Islam is giving food to devil by Jihadist movement.

@ Charlie, history says Europe ruled Muslims for years but they failed to upgrade Muslims’ mentality like any other religion they ruled e.g. Hindu, Buddhists, etc. Japan, India became power of the world today but Pakistan became failed state with Jihadist movement. Are Europe following footstep of PAKISTAN introducing Sharia and blasphemy Laws and accepting Quran as book from above?

Europe should make hay while the sun shines, I mean before Muslim faith increase to alarming number. Europe should control Muslim growth. Muslims grows by geometrically, 2, 4, 16, 144 etc. by birth rate. Otherwise glorious Europe will see like fall of Israel to Nebuchadnezzar, the king of Babylon in the biblical time for punishment to disobeying will of God.

Excellent speech by William Lane Craig! As a Christian Apologetic, he is one of the best I've seen!

God bless you for your faithfulness and constancy in presenting the truth. It is clear that you have a heart for Muslims while hating the lies that they have been caught in. God bless you!

You mentioned that the new recruits to Islam came from criminal backgrounds and that certainly is true to a large extent, especially as Islam requires no brokenness and true repentance. Also, Islam comes to recruits through the agency of man, whereas Christian faith can only occur as man enters into a personal relationship with God. In Islam, Satan has removed all the important personal elements of salvation and left only that which Mohammad's limited mind could understand.

There are some new recruits who have no criminal past, but in every case you can identify an incident or situation in their life which has left them open to a doctrine that common sense would normally refute. Islam has recruited a vast number of young people, knowing that it is at this age that suicidal thoughts are most predominant. Imagine making suicide a glorious thing to a depressed youth? Imagine telling them that their families will be blessed as a result of their suicide? That is an evil of gargantuan proportions!

Rituals, rhetoric, rules and rewards are effectively what Islam is made up of, because it is what Satan knew man could understand with his normal faculties. Every aspect of Islam falls under one of these categories, reflecting the limited nature of the intellect of its designer as well as his purpose. Satan comes to steal and to destroy and we see these things as evident in the teachings and the outcome of the teachings in Islam.

Great work Dr william craig! thanks for posting Dr David Wood you are the best

He has summed up in a couple of minutes, as to the history of why Muhammad's message turned violent from its initially peaceful stand. Also, as we discuss Islam, I cannot help but think that the Jehovah's Witnesses concept of God is very similar to the Islamic one. You have no guarantee of salvation. You don't really know why Jesus had to die for us, since we still have to "earn" our salvation (in this case, this concept is worse than Islam's, because at least in Islam, Jesus didn't die). "Jehovah God" is actually a very scary deity. Must thank so many people for all these info, David, Dr Craig, Sam for his debate with Anjem, the whole team.

Studio Seven is reliably inside reach to offer on account of our nation and starting late dealt with I Live Pakistan display where painters paid worship to Pakistan.