Eleven people were killed when jihadists attacked the offices of Charlie Hebdo in Paris. Robert Spencer and Pamela Geller decided to send a message to jihadists by hosting a Muhammad cartoon contest in Garland, Texas. Apparently, jihadists responded with a message of their own.

How many people have to die in the name of Allah before we're allowed to have an open, honest discussion about jihad? 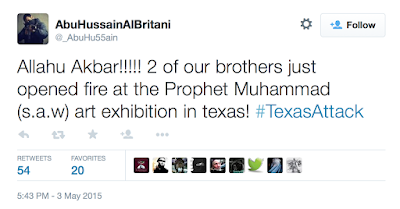 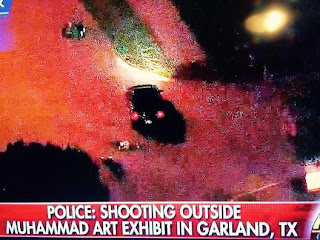 Fox News—Two suspects are dead and an officer suffered non-life threatening injuries after a shooting erupted outside a Muhammad art exhibit and contest in Dallas Sunday.

According to the Dallas Morning News, two men pulled up in a vehicle and then shot an officer outside the Curtis Culwell center Sunday evening. They were then fatally shot by police officers.

The officer's injuries are not believed to be life-threatening, the paper reported.

An officer dressed in SWAT gear took the stage toward the end of the event at the Curtis Culwell Center in Garland and told attendees, including an Associated Press reporter, that a shooting had occurred.

It wasn't immediately clear if the shooting was related to the event.

Garland Police Department spokesman Joe Harn declined to confirm the SWAT officer's statements and said he had no details.

About 75 attendees were taken to another room. Later, a group of 48 people were escorted to a school bus. Authorities told attendees they would be taken to a nearby high school. A second group was set to be moved shortly after.

Nearby businesses within a 2,000 foot perimeter, including a Walmart and Sam's Club, were evacuated, the Dallas Morning News reported.

The New York-based American Freedom Defense Initiative was hosting a contest that would award $10,000 for the best cartoon depicting the Prophet Muhammad at the venue.

Such drawings are deemed insulting to many followers of Islam and have sparked violence around the world. According to mainstream Islamic tradition, any physical depiction of the Prophet Muhammad — even a respectful one — is considered blasphemous. (Continue Reading.)

quote of the day:

"It wasn't immediately clear if the shooting was related to the event. "

Allah Akbar, how many times have heard that? Sounds like Muslims really have a very short vocabulary and are too brainwashed but to parrot something a akin to Nazi Germany parades of Seig Heil or Hail Hitler.

God is great? Is god really good at killing people, oops I think that was Obama's line. The high man of God!

Lol...looks like someone is gonna come on the comments to blame this on the zionists pretty soon..

I have heard that the police did not shoot the terrorist in Garland, Texas. Instead, it was Pam Geller's security detail that killed them. I guess it does not matter unless there is something in police procedure that permitted a critical delay in action.