Dozens of Al Qaeda Bombmakers May Be in U.S. as Refugees

Didn't these bombmakers get the memo from President Obama and Prime Minister Cameron that Islam is a religion of peace and tolerance? 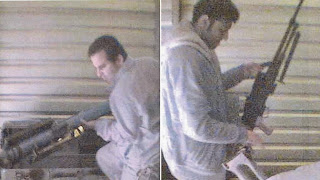 ABC News—Several dozen suspected terrorist bombmakers, including some believed to have targeted American troops, may have mistakenly been allowed to move to the United States as war refugees, according to FBI agents investigating the remnants of roadside bombs recovered from Iraq and Afghanistan.

The discovery in 2009 of two al Qaeda-Iraq terrorists living as refugees in Bowling Green, Kentucky -- who later admitted in court that they'd attacked U.S. soldiers in Iraq -- prompted the bureau to assign hundreds of specialists to an around-the-clock effort aimed at checking its archive of 100,000 improvised explosive devices collected in the war zones, known as IEDs, for other suspected terrorists' fingerprints.

"We are currently supporting dozens of current counter-terrorism investigations like that," FBI Agent Gregory Carl, director of the Terrorist Explosive Device Analytical Center (TEDAC), said in an ABC News interview to be broadcast tonight on ABC News' "World News with Diane Sawyer" and "Nightline".

"I wouldn't be surprised if there were many more than that," said House Committee on Homeland Security Chairman Michael McCaul. "And these are trained terrorists in the art of bombmaking that are inside the United States; and quite frankly, from a homeland security perspective, that really concerns me."

As a result of the Kentucky case, the State Department stopped processing Iraq refugees for six months in 2011, federal officials told ABC News – even for many who had heroically helped U.S. forces as interpreters and intelligence assets. One Iraqi who had aided American troops was assassinated before his refugee application could be processed, because of the immigration delays, two U.S. officials said. In 2011, fewer than 10,000 Iraqis were resettled as refugees in the U.S., half the number from the year before, State Department statistics show. (Continue Reading.)

ABC Breaking US News | US News Videos
Posted by David Wood at 4:24 PM

Europe is having an INVASION and there is nothing else you can call it. Muslims on those boats are throwing Christians overboard and no outrage from leftie liberals. It is scary where the western world is going with these brainwashed psychos everywhere.

Clear objective of Islam is to conquer land and rule with terror, since its inception in sixth century till now and forever. It has no purpose of worshiping true God in return for gratitude giving us everything to enjoy abundant life in this world. Religious part of Islam is just a make up to attract people.

Islam has nothing inner strength that can give peace of mind to feel complete joy with presence of our creator in Spirit in our trouble hearts. Islam is empty vessel makes too much sound with peace of religion to get people of all kinds, criminals, thugs, and stupid who feel empty in their hearts and do not have any hope now or in future. Islam is a mirage of Arabian sands travelers (criminals, drug edicts etc.) come to quench their thirst for life but instead finding water they find fuel that energize further their criminal behavior.

So is the Islam do you Muslims want to stay on and want to waste your precious time of life. Life is like grass, roses dries up and fall after sometimes but spiritual life is eternal never dries up, evergreen. Where can you find that life, who can give you that life which never dries up but hopes springs up all the time?

Any interested Muslims can tries with Jesus Christ as Son of God, not as prophet Jesus. Saying Son of God as Prophet degrades His status as Holy Mighty God. This false treatment of God brings nothing but curse to Muslims World. As a result all Muslim countries in the world are now in trouble fighting each other and nobody knows when this wild fire will end.

eToro is the best forex trading platform for novice and professional traders.