How many more people have to be beheaded before we can have an open, honest discussion about Islam? 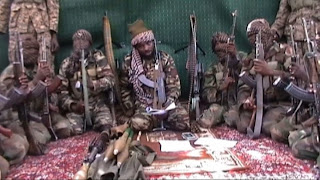 Scores of attackers invaded the village at 11 p.m. Friday when residents were mostly asleep and set homes on fire, hacking residents who tried to flee.

"‎The gunmen slaughtered their 23 victims like rams and decapitated them. They injured several people," said Ibrahim Adamu, a local politician who fled.

"They burned a large part of the village and we are afraid some residents were burnt in the homes because most people had gone to bed when the gunmen struck," said Adamu, a ward councilor in the village.

A paramedic ‎at a government hospital in the nearby town of Biu said 32 people from Buratai were taken to the hospital with gunshot wounds and burns.

"The injured victims said a lot of people were beheaded by the attackers," the paramedic said. (Continue Reading.)

God will judge all Muslims for worshiping evil as Allah and Muhammad as false prophet. He would throw them in hell fire after their death. It is proven again and again to Muslims that Quran teaches evil philosophy. They know it very well by their conscientious judgment that killing innocent people is forbidden by God Himself thru Ten Commandment, but they do not turn from evil teaching of Quran.

Philosophy of Quran is "Might is Right". Muhammad took sword when he failed to convince his own tribe Kuraish to follow him as prophet with his false teaching. Whereas God showed love, not might throughout human history, is the best weapon to defeat Evil. Jesus’ Crucifixion seems with naked eyes defeat of God, the Almighty to evil but in depth sense evil is defeated once for all time by His resurrection conquering death and saving all souls who believe Him, as Son of God.

Muhammad failed to understand deep love of God toward us to save us from death in hell fire for life eternal. He did nothing other than fight and expended his evil empire. Muslims will have no opportunity to say to God at Final Judgment Day that they were not been informed by anybody. If they have eyes and ears they must pay attention and be saved. There will be no excuse to avoid punishment in Hell fire.

"The gunmen slaughtered their 23 victims like rams and decapitated them."

Ritualized human sacrifice which were of course accompanied by shouts of praise to their deity ("Allahu akbar").