Muslim Woman Threatens to Murder Me Over Qur'an Video

A Muslim woman named Zainab has threatened to kill me for my epic masterpiece, "The Original Burn the Qur'an Day":

As you can see from her threat, however, she hasn't even watched the video. She assumes from the title that we burned a Qur'an, when we actually condemned book burning. The title of the video refers to Caliph Uthman burning all known copies of the Qur'an to conceal the differences among the manuscripts.

So, this woman would gladly kill me based on her false assumption. The tragedy is that, if she had watched the video, she might have learned something about the Qur'an. Amazingly, only minutes before she threatened to kill me because of her false assumption that we burned a Qur'an, she praised someone for burning a Bible! 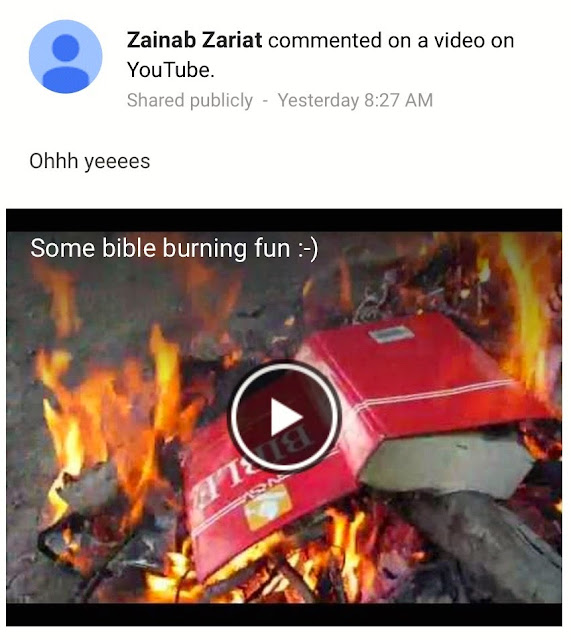 Welcome to Islam.
Posted by David Wood at 8:40 AM

Got a screenshot of her threats?

“Some Christians are turning to Muslims and joining Islam. Why? Because they probably read the Quran someone translated it and they understood Allah is real. In the Bible it just tells stories not the future.”- Zainab Zariat

@ Zainab Zariat, and all Muslims,

It seems to me Zainab, like millions is Muslim by birth only, not understanding how Quran was made in present form and what it teaches. It is not her fault, because Quran is compiled by Othman as David said in his video burning all other Quran believed to be book of Allah, except his version of Quran.

Zainab did not notice that most of the converted Muslims have criminal background like shoe bomber Richard Reid. They converted to Islam not because they found true God, but they found sex and violence in combination with Allah and heaven that permits innocent killings by the name of Allah-hu-Agbor, is enjoyable and interesting. They found that even Muslim’s prophet Muhammad enjoyed his life with sex, war, money and power. Islam permitted Muhammad to marry even his daughter-in-laws and a minor 6 year old girl Aysha.

If anybody read Quran s/he would find in Quran that Muhammad brought to mankind by his sword from his imaginary allah, nothing but unjust, cruelty, and a path to Hell fire, opposite to what our Lord Jesus Christ brought from God by his blood at the Cross, our salvation for forgiving our sins by grace from God, a path to Heaven for eternal life. Christian God wants from us our repentances and loving our God with our whole heart, mind, souls and body. Whereas, Muslim Allah wants Muslims to kill kefir and die for him fighting, without sign of fighting no one would be in heaven. This is the difference, this separate good from evil.

The Bible is collection of 66 books written in different period of human history by different authors in relationship to God and His creation mankind. All 66 books glorify one God of Universe consistently from the time of creation, today and till end of the world. Whereas, Quran is one man show written only to establish one man’s power and his ideology to create hell in the world as Islamic History speaks for it since its formation in sixth century till today and God knows when this hell power of Islamic Jihadists would be ended permanently.

Use your wisdom brothers and sisters under One God to choose the right path. There are many paths in the market that boldly say their way is highway but only one path would takes us to Heaven for eternal life. All that glitters is not gold; we must realize this life principle to choose our path for life eternity. It is serious matter, but Jesus Christ made our life easy to be with God as well as enjoy abundant life. Thanks be to God in Heaven!

I am in complete agreement with your views..! The unspeakable evil which is Islam in ALL it's forms must be exposed for the backwardness and evilness that it is...!!!

This is a woman speaking!?!

I suspect that Mohammad himself would chastise this woman for this appalling outburst. Not to mention what Uthman bin Affan would have said to her?

If you are reading this blog, you have brought shame on yourself, your family and Mohammad with your cursing, swearing and filthy speech.

You believe that Allah created our bodies, yet you mock your Allah by turning his creation into unholy things, referring to parts of the human body as if they were created for you to use as insults.

How have you so easily lost your dignity and modesty?

quote from Osama 2 Samuel 4
10 when a man told me, 'Saul is dead,' and thought he was bringing good news, I seized him and put him to death in Ziklag. That was the reward I gave him for his news!

If Prophet Muhammad did it, you'd be vomiting all over the place for it. But when it's in the Bible, it's ok.

Visit the following link to see AMPLE CUTTING OFF OF HANDS AND FEET and killing of people in the Bible:

Now Osama why is it that for years YOU seem to suffer from the illusion that TWO GODS gave two books?
Of course the God the Christian believe in could not make the claim that he gave 3 Volumes.

Mr. muSlime, if the OLD-TESTAMENT contains simmilar commands as found in the koran it is because they come from the same one ALLAH! You DO NOT accept allah's claim to have given the OLD TESTAMENT just like allah gave king david psalms?

Once more Mr. muSlime if one person writes a series of book consisting of 3 volumes, why would one give credit to a second person? If allah says in his koran that he gave the old testament the 5 books of Moses
gave the 4 gospels to Jesus notice I didn't type “NEW TESTAMENT,
and the third volume in the series the koran why do you find fault with the first “volume”.

As to the prophetic books in the OLD TESTAMENT Samuel is one of the 124.000 prophets send by allah
So one can assume that the history as found in it may be accurate.

You try your level best to whitewash ISLAMS scripture yet at the same time point an accusing finger at the OT
as if its source was DIFFERENT from allah.

Unknown, what needs to happen is reverse the dhimmitude of western liberals. This is tye biggest threat to western civilization.

ah, yes, the religion of "Peace." Seems to me, this woman's words are right in line with the devilish Islam.

I think Zaynab is just a little child. Which might make her even more disturbing, I suppose. Check out the first comment here:

I agree, she comes across as being quite immature. I actually thought of asking her what her parents thought of her behaviour. If she is just a teenager, then how alarming is it to hear such vile hatred coming out of one so young?

Does Zainab kiss the black stone with that mouth?

Muhammad: His life based on the earliest sources....
Martin Lings pdf 109

He did not know any of the six, but they had all heard of him and of his claim to prophethood, and as soon as he told them who he was their faces lit up with interest, and they listened to him attentively. Every man of them was familiar with the threat of their neighbours, the Yathrib jews:

"A Prophet is now about to be sent. We will follow him and we will slay
you as 'Ad and 'Iram were slain"; and when the Prophet had finished
speaking, they said to each other:

"This is indeed the Prophet that the Jews promised us would come. Let them not be the first to reach him!"

Then, after one or two questions had been asked and answered, each of the six men testified to the truth of the Prophet's message and promised to fulfil the conditions of Islam which he laid before them. "We have left our people," they said, "for there is no people so torn asunder by enmity and evil as they; and it may be that God will unite them through thee. We will now go to them and summon them to accept thy religion even as we have
accepted it; and if God gather them together about thee, then no man will be mightier than thou."

honestly I've had a hard time believing that the success the lice-ridden profeet had in Yathirb/median, came because he could promises them booty. after all did not the pagans make some agreements not to fight each other? How could they do that, if they were simply savages?

The above quote is just one of several, which points to the possibilty that aba-l-qasim did indeed see himself as a NON-JEWISH Messiah, send to bring a NEW society a ISLAMIC varient of the kingdom the Jews hoped for.

One of the temptations of Jesus by Satan was that Jesus should fall down and worship him. Honestly if I were Satan and wanted to be worshiped as god, I'd convince a PAGAN that the Angel he meets is speaking for the REAL god.
Let him create a religion which has MANY good points in it, just with the minor distortion, that the god they worship with utmost devotion and love, is not the REAL GOD.

The “night-journey” IMHO was simply a “vision” showing aba-l-qasim that HE IS continuing the LINE of the Jewish prophets (since even Jesus was present) culminating with aba-l-qasim being the MOST IMPORTANT JEWISH figure THE MESSIAH, with Jesus even pointing to the false prophet/Messiah.

I think all the muslim defenders of the quran and islamic faith all went to the same English school. I just can't believe how nasty and filled with hate they are. So much for a religion of peace. If I decided to become a muslim I guess I would have to learn to swear like a trooper, suggest that any little thing is a racist issue, call people vile names and learn to become a murderer. Oh my God!