Whenever there's a terrorist attack, politicians and the media assure us that only a tiny minority of Muslims have extremist views. The problem is that actual statistics prove, again and again, that the minority is never tiny. Following the Charlie Hebdo Massacre, for instance, 27 percent of British Muslims said that they sympathize with the motives of the attackers. Since there are approximately 3 million Muslims in Great Britain, the number of Muslims who sympathize with terrorists killing cartoonists is close to a million.

Is it any wonder the British media are so terrified of criticizing Islam? 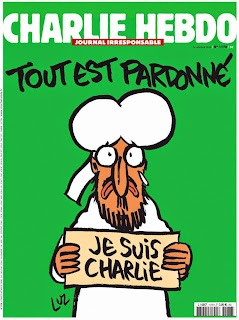 Telegraph—This morning the BBC published details of a major poll of the attitudes of Britain’s Muslims. The headline on the front of the BBC website linking to the research states: “Muslims ‘oppose cartoon reprisals’”. This of course relates to attitudes within the Muslim community towards the recent Charlie Hebdo attacks.

It’s a reassuring headline. It’s also wrong. Many Muslims - a majority - do indeed utterly oppose the murderous killings in Paris. But a very, very large number of Muslims don’t. Presented with the statement “I have some sympathy for the motives behind the Charlie Hebdo attacks in Paris”, 27 seven percent agreed with the statement. A further 2 per cent refused to answer the question. And an additional eight percent said they were unsure whether they had some sympathy or not.

That is a shocking figure. And an utterly shaming one for Britain’s Muslim community. If this poll is accurate, over a quarter of British Muslims overtly sympathise with the motives of those responsible for the cold blooded murder of 16 journalists, police officers and Jews. 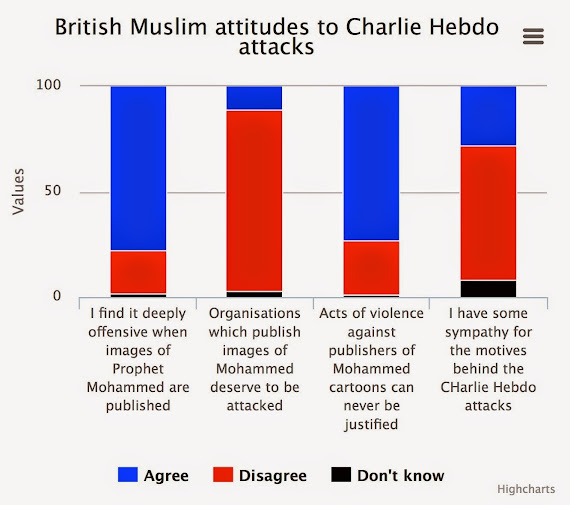 Below the report is an article by BBC Today program reporter Sima Kotecha. It begins: “Islam is a religion of peace and love - not violence: sentiments that have been expressed numerous times here in Bradford. Out of the dozens of people I've spoken to, an overwhelming majority have said they're angry that their interpretation of Islam has been eclipsed by an extreme ideology that is too often projected in the media."

That statement - and those sentiments - are simply not compatible with the BBC’s own research. In a separate finding, the BBC found 68 per cent of Muslims believed “acts of violence against those who published such images [of the prophet Mohammed] could never be justified”. Which means 32 per cent of those questioned take a different view. Another question asked respondents if they agreed with the statement “Muslim clerics who preach that violence against the West can be justified are out of touch with mainstream opinion”. 49 per cent agreed. Meaning again, that a majority of Muslims either disagree or sit on the fence. (Continue Reading.)

For my thoughts on the Charlie Hebdo Massacre, watch this:

Hi david sorry to post this here, but I was wondering if you have the time if you would read something for me?

Im having some discussion with a Muslim on one of the Jesus or Muhammad youtube videos and would like you to read the discussion so far if you have the time?

I couldnt find your email or whether to send it to the Acts17 one (dont know that email either).

If your interested, I was hoping you could give me some tips when discussing too, see if you think I am being fair in what I say. Basically so I can become a better apologist.

Thanks for any help you can give.

If Muslims like Christians, ask question what would Muhammad do for Charlie Hebdo Murderers? Surely Muhammad would say to kill cartoonist, because he insulted Muhammad. It is written in Quran to kill anybody who insults Muhammad.

What a contrasting religion Islam is! By ignorance they are worshiping Evil power, not true God, creator of Universe. All Muslims must be ready for burning in hell fire for their life eternal unless they repent and accept Jesus before their last breath in this world.

Jesus is the only way to heaven, because He came from heaven and went to Heaven with His own body in presence of many people 40 days after His resurrection. He promised He will take every one of his followers who practice Christianity with faith and action.