Syed Farid Khan, a 35-year-old used car salesman, was accused of raping a 19-year-old college student. An angry mob in Nagaland, India, stormed the prison, dragged him out, tortured him, and killed him. 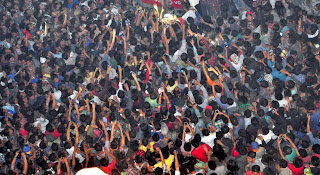 Reuters—A mob of several thousand people broke into a high-security prison in India, dragged out a rape suspect and killed him, officials said on Friday, adding that police had to impose a curfew to restore order.

Rape has been a particularly emotive crime in India since 2012, when a student was raped and tortured on a bus in New Delhi and later died. The government has banned a documentary about that attack, re-igniting debate about gender inequality.

The mob attacked the prison late on Thursday in the northeastern state of Nagaland.

The man, a 35-year-old Muslim businessman accused of raping a woman, was dragged out and hauled naked through the streets and beaten to death.

"Security personnel at the jail were overpowered by the mob," said the state's chief minister, T.R.Zeliang.

One person was killed and several injured when police fired on the mob. (Continue Reading.)

WOW! I know that this isn't justice (the american way)but it's India and they're getting fed up with what the quran is telling those muslims:
Qur’an 23:1-6—The Believers must (Eventually) win through—Those who humble themselves In their prayers; Who avoid vain talk; Who are active in deeds Of charity; Who abstain from sex, Except with those joined To them in the marriage bond, Or (the captives) whom Their right hands possess—For (in their case) they are Free from blame.

Qur'an 70:22-30—Not so those devoted To Prayer—Those who remain steadfast To their prayer; And those in whose wealth Is a recognized right For the (needy) who asks And him who is prevented (For some reason from asking); And those who hold To the truth of the Day Of Judgement; And those who fear The displeasure of their Lord—For their Lord’s displeasure Is the opposite of Peace And Tranquility—And those who guard Their chastity, Except with their wives And the (captives) whom Their right hands possess—For (then) they are not To be blamed.

Muslim people of Pakistan, Bangladesh, Somalia, Egypt, Syria etc. how do you feel when violent mob take laws at their own hand? Muslims of Pakistan watched Christian couple was killed by violent mob; churches were burnt by violent mobs and police forces watched the burning inactively. Neither Pakistani Mullahs, nor so called good Muslims brought out procession to condemn such killings and abolish blasphemy laws to protect minority. Islam needs to be rectified to glory true God of Heaven. Government must bring law breakers to justice with zero tolerance.

We condemned any extra judiciary killing, no matter who does it.

This is not justice, regardless of culture, ethnicity, religion or gender!

It is indeed dangerous territory when we begin to condone mob violence as a response to any crime of violence.

The woman who was raped did not get un-raped, so what was achieved? A person was killed as the mob rioted and three prisoners escaped the jail, and a man accused of rape was tortured and murdered. Hundreds of people have now been complicit in a murder and will likely not face consequences. That is the opposite of justice.

A violent mob hi-jacked an important issue and used it for their their own violent tendencies. This is the work of the enemy in the hearts of people, knowing that violence will only breed more violence. There will be copy cat attempts for certain.

Everyone is the loser here.

I don't understand the purpose of posting this story. The way I read it, a muslim man raped a woman, he went to jail, and mob rule took justice into their own hands by killing him. Aren't the guilty party the mob?

Am I missing some more aspects to this story. The video mentioned some ethnic elements here.