"His motive is not yet clear." Hmmm. I have a few guesses. 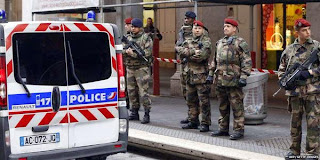 Associated Press—An attacker with a knife hidden in his bag attacked three soldiers on an anti-terror patrol in front of a Jewish community center in southern France on Tuesday, two police officials said.

Sarah Baron, a police union official in the city of Nice, said the attacker was detained after the attack near the Galeries Lafayette department store. Nice Mayor Christian Estrosi said the attacker had an identity card with the name Moussa Coulibaly.

The surname, which is relatively common for families of Malian descent, is the same as that of the man who seized hostages in a kosher supermarket in Paris and gunned down a policewoman last month.

Another police official said the attacker pulled a knife at least 20 centimeters (8 inches) long out of a bag and set upon one of the soldiers, injuring him in the chin. He then swiped two other soldiers — one in the cheek, the other in the forearm — before being apprehended by riot police stationed near the building, which houses the city's Jewish community center.

A manager at the center, who did not want to be identified because she was afraid, confirmed soldiers posted in front of the building were attacked. She said it happened around lunchtime and no one was inside the office.

The attacker, aged about 30, had a record of theft and violence, the official said on condition of anonymity because the investigation was ongoing. His motive was not yet clear, the official added. (Continue Reading.)

@ Osama Abdallah,
There are no hearts and minds of Muslims that civil society can win Muslims’ minds living in America and Europe. FBI reported in CNN news today that 13 young Muslims have been arrested plotting major attack like 9/11 and more are growing with alarm situations.

Our President, Barak Obama’s believe on bankruptcy of terrorist Muslim ideology is not true. Terrorists are gaining more support from main stream Muslims with money and manpower. Why didn’t America and West learn lesion from Iraq war?

Majority Shia was suppressed by brutal regime of Saddam Hussein a minority Sunni. America liberated them but again same oppressed Shia turn around and pointed gun towards America. Islamic History teaches Muslims to be ungrateful towards host country.

Muslims work well when there is fear but no carrots. Hosni Mubarak of Egypt, Saddam Hossain of Iraq, Bashar al-Assad of Syria and military rulers of Pakistan are typical example maintaining peace and order in Muslims community. Muslims love to be ruled by sticks, no carrots.