When Muhammad conquered Mecca, he and his followers destroyed the idols at the Ka'ba. Not surprisingly, Islamic State jihadists, who are imitating the early Muslim community to the letter, have destroyed the ancient artifacts on display at a museum in Mosul. 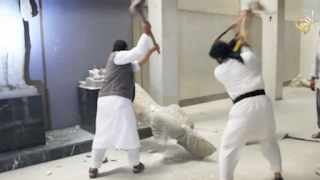 BAGHDAD–The Islamic State group released a video on Thursday showing militants using sledgehammers to smash ancient artifacts in Iraq's northern city of Mosul, describing the relics as idols that must be removed.

The destructions are part of a campaign by the IS extremists who have destroyed a number of shrines -- including Muslim holy sites -- in order to eliminate what they view as heresy. They are also believed to have sold ancient artifacts on the black market in order to finance their bloody campaign across the region.

The five-minute video shows a group of bearded men inside the Mosul Museum using hammers and drills to destroy several large statues, which are then shown chipped and in pieces. The video then shows a black-clad man at a nearby archaeological site inside Mosul, drilling through and destroying a winged-bull Assyrian protective deity that dates back to the 7th century B.C.

In New York, U.N. spokesman Stephane Dujarric said the U.N.'s cultural agency, UNESCO, is examining the video. "The destruction of cultural heritage is reprehensible and criminal," Dujarric said, adding that it robs current and future generations of the history of their past. (Continue Reading.)

Is there anie hadith ore qur'an surah thate can be the source off this action?

@fernando
Google "mahmud ghazni and destruction of temple of somnath".
After reading that, read the current news. You will feel like you have time traveled back in the "golden" ages of Islam.
God bless and JESUS is LORD

It is interesting to see that ISIS is making enemy even with neutral body of UNO, UNESCO by the wisdom from quranic teaching of Islam. After breaking of Buddha statute in Afghanistan Al-Quaida, drew plan to destroy Twin Tower in New York City, what's next after this?

Thanks David! Shows that ISIS is following Muhammad to the letter.

I am reminded of the burning of the Egyptian Scientific Institute in 2011, in which 10s of 1000s of valuable books and manuscripts were destroyed.

Of course these happenings are insignificant compared to the many people killed, maimed or dispossessed in the various parts of dar al-islam.

Nevertheless I am thankful for those "plundering, arrogant, imperialist, dilettante" European archaeologists and adventurers of the 19th and 20th centuries who removed so many of the treasures from Mesopotamia and Egypt and brought them into western museums and institutes. At least for the time being, these are still safe.

This did not obviously have the same impact as watching people being executing, but it is nonetheless disturbing.

History is a big part of my family's life and two of us have been engaged professionally in this field. Watching this video reminded me again that many Muslims fear what they do not understand.

This is not to say that all Muslims have hated knowledge, but it is to say that any knowledge that doesn't directly line up with Islamic dogma is a threat to Islam.

How sad to have a faith that is so easily threatened by things made by human hands.

These objects do not just represent a part of history, they inform us about history and therefore about ourselves. It is like burning libraries, a practice that Muslims have engaged in several times in history.

Certainly Old Testament leaders were told to destroy places of pagan worship and idols made by man, but this was because of what the people were led to do with them, not the objects themselves.

As Islam takes hold within these countries, no doubt those who fought to have ancient art works repatriated from the British Museum back to the Middle East may be regretting their decisions.

I also share with you in that 'conflicted' gratitude.

It is interesting to see that ISIS is making enemy even with neutral body of UNO, UNESCO by the wisdom from quranic teaching of Islam. end quote

Anjem Choudary:
As MUSLIMS we do not recognize the
United Nations,
Security Council,
NATO, GENEVA II, III, IV,
they are regimes of the devil. [end of quote]

This is why ISLAMIC-STATE MUSLIMS do NOT CARE about our opinions... :-/