Police officials in France have identified the Charlie Hebdo terrorists as Said Kouachi, Cherif Kouachi, and Hamyd Mourad. The Kouachi brothers were born and raised in France. 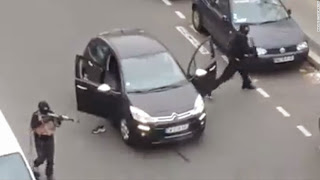 PARIS — French police have identified three men as suspects in Wednesday’s massacre of a dozen people at the offices of a satirical weekly newspaper, a brazen attack that set off a massive manhunt amid widespread condemnation of the killings.

According to police and other officials, two of the suspects are French brothers aged 34 and 32 years old from the Paris region, and the third is an 18-year-old from the northeastern city of Reims. There were conflicting reports on whether the teenager was also a French national.

In a late-night telephone interview with CNN, Paris Deputy Mayor Patrick Klugman said the three gunmen have been identified and “may have been arrested.” One “may have been prosecuted in the past,” he said, but he did not know the charge.

There was no immediate official confirmation of any arrests in the case.

The Associated Press, citing police officials, named the suspects as Frenchmen Said Kouachi and Cherif Kouachi. The news agency identified the 18-year-old as Hamyd Mourad. It quoted one official as saying the suspects were linked to a Yemeni terrorist network. (Continue Reading.)

@ Osama Abdallah,
What would you say about this barbaric killing of 12 journalists to shut the mouth of freedom loving people of the world? Does your stomach not yet been filled up with innocent blood to defend your bloody religion Islam?

All these blood spilled, because your prophet Muhammad commanded all Muslims thru his book Quran to kill those who insult Muhammad as prophet. Muhammad ordered this decree by the name of his imaginary “Allah” to protect himself from any criticism as fascist dictators of all time used to do, such as Hitler of Germany, Mussolini of Italy etc., to perform their evil works by the name of Politics. Islam is a political mask disguised with sheep’s cloth of PEACEFUL religion. Do you need proof?

Muhammad declared political decrees (Surah) thru his book Quran as needed. For example he gave Surah to protect himself from his criminal behavior having sexual relationship with his son’s wife, marrying a minor girl etc. If you have brain you can see Muhammad’s fascist political reason behind every surah in Quran.

But on the contrary, The Bible is full of God’s love, kindness and justice to all mankind. Jesus commanded to kill an adulterer by a person who is holy, thus prohibiting totally from killing another human by a man. God himself will judge. But in Quran we find Muhammad to force Jews and Christians to follow him, gave a surah (decree) to kill them or force them to pay tax for life security. This proves Muhammad is prophet for Evil not for True God, the Almighty.

Will you still defend Muhammad’s self-made religion Islam as religion of peace? These killings and all other killings around the world we are watching daily are result of Muhammad’s imaginary fearful slogan “Allah-Hu-Akbar”. Because of all these terrorism it is proven that Muhammad is Prophet for Devil to carry out evil’s work in this world.

How long do we have to watch these savage brutalities in broad daylight? How much blood civilized media need to isolate Quran as axis of evil?

May Merciful God give us peace and Happiness for all mankind during this New Year!

People are already proving that this Paris BS is all fake:

I'm curious to know - (I see that presently, any Islamic attacks are deemed by you to either be faked or committed by undercover Zionist Jews) - How do you defend the original killings of Artistic Expression ordered by mohammad himself between the years 624 and 630?

I've expressed this question in social media - yet no muslim has responded - perhaps one of Islam's "Scholars" could shed some light on this for me?

Yes, if what's happening in front of you eyes is fake, then Allah and Muhammad must really be fake.

C'mon man. Quit blowing air into my ear and telling me it's windy. You have no credibility. Please don't post anything on this page anymore.

What are the chances:

Everything else is fake... so that Islam can be real.


Other things that are happening are real, and Islam is fake.


Tantamount to saying: I cover my eyes and when I cannot see other people, then they cannot see me also.

@osama abdallah
This BS is not fake but it's just that you're full of BS. That's the main agenda of Taliban and al-qaeda and IS to recruit young innocent boys and girls in to terrorism while telling them how west is trying to defame Islam and the stupid Zionist theory. They use these tactics to brainwash kids, that they are the victims here and so they have to fight for their religion and honor.
It's people like you who defame their own religion. No one needs to do it because you single handedly are doing a fine job.
Grow up or shut up. Enough of your BS .

There was no blood AT ALL during the shooting! Did you even watch the videos?

Do you at least not care about the Truth? Or it doesn't matter as long as Islam is being framed and attacked?

@osama abdallah
So your logic is that there was no blood in the video and that proves what?....are you saying that if there's no blood in the video than????? No body died???is that what you're saying???
And I guess you didn't read my previous msg. I said you're the one who is defaming your own religion. I have Muslims in my family, both Shia and Sunnis, my first cousins are Muslims, I live in a Muslim country and I know not all Muslims are bad. My best friend is an imam and an alim , studying to become a mufti and other is hafiz-al-quran. I love Muslims but I don't like their ideology which makes them even worse than a beast.
You have to own up to the mistakes of your fellow Muslims. Don't blame any and everything on Zionists. Say it the way it is.
Yes there is terrorism in the world done under the flag of Islam, yes people are killed when they differ with Islam, yes mullahs use the doctrine of Islam and jihad against non'Muslims, yes Muslims don't wanna co-exist with other religion. Yes there's a problem with Islam.
Now once you acknowledge the mistakes THAN take steps to correct it.
I wouldn't want anything more than Islam to be peaceful. You wanna twist and turn the quranic verses and hadith and sunnah and say that it's all about love and peace then by all means do it. I would love for Muslims to stop killing and live peacefully, even when that's not what their religion teaches, but you HAVE to own your faults and mistakes.
If you still don't understand what I'm saying than habibi you have a lower IQ than my balochi goat and that's when we take our sandals off and throw it at the goat, Pakistani style lol
Lord JESUS bless you

See the subtitles/transcript/translation of this vdo.
you will understand that muslim people throughout the world evwn in saudi are not allowed to think compare or choose anything.

She is very clear in what she is speaking