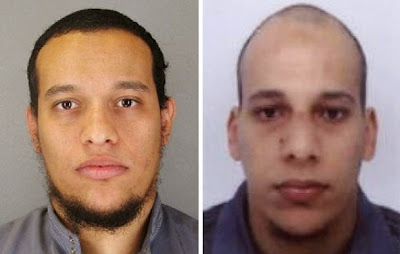 Paris (CNN)—Cherif and Said Kouachi, the two brothers wanted in the massacre at the offices of Charlie Hebdo magazine, have been killed by security forces in a town where they'd been surrounded, a local mayor said.

About the same time late Friday afternoon, explosions could be heard around where people were being held hostage in a kosher grocery store in eastern Paris. (Source)

To understand what Islam teaches about dealing with non-Muslims, watch this:

They were "killed" to be sent somewhere to work for the Zionist machine. Just like the JFK assassin. He was never killed. It was played that he was "killed" on live TV so that no one would then doubt that he died.

You are absolutely amazing, lol. and by "amazing" I mean completely and utterly delusional.

You are absolutely amazing, lol. and by "amazing" I mean completely and utterly delusional."

If you've seen the AIR GUNS (literally air guns) that were shot by the "terrorists", and how the cop wasn't even touched (let alone shot to death), then you'll clearly see that this whole Paris thing is a joke:

I think Osama Abdullah is a caricature cooked up by David Wood and the answering-Islam team to assist in discrediting Islam. I don't think it needs any help - simply reading the source material is sufficient for that.