Ismaaiyl Abdullah Brinsley shot and killed two New York City police officers (Wenjian Liu and Rafael Ramos), who were sitting in their patrol car. Brinsley was clearly motivated by outrage towards the death of Eric Garner. However, there may be another factor here. Brinsley was an Arabic speaker and posted a Qur'an passage on "striking terror" into the hearts of the enemies of Allah. 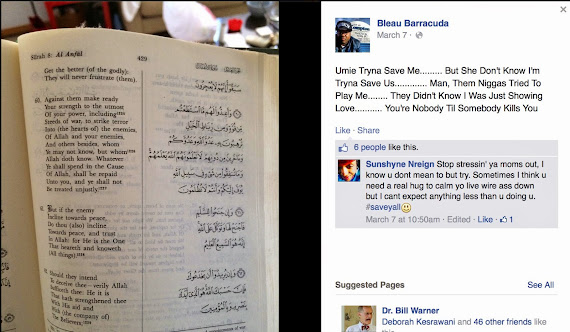 
Against them make ready your strength to the utmost of your power, including steeds of war, to strike terror into (the hearts of) the enemies, of Allah and your enemies, and others besides, whom ye may not know, but whom Allah doth know. Whatever ye shall spend in the cause of Allah, shall be repaid unto you, and ye shall not be treated unjustly.

Here's more on the story: 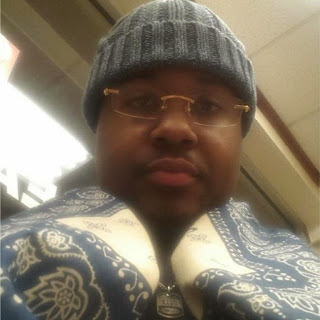 The gunman approached the passenger side of the patrol car and opened fire several times, fatally wounding officers Wenjian Liu and Rafael Ramos, authorities said at an evening press conference.

They were "shot and killed with no warning, no provocation," Bratton told reporters. "They were quite simply, assassinated."

Both were shot in the head, Bratton said.

The families of the fallen officers rushed to Woodhull Medical Center on Saturday, as dozens of police officers gathered in a show of support.

The officers—one with two years' experience, the other with seven years on the job—were normally assigned to downtown Brooklyn, but were working a "critical response" detail in an area with higher crime, police said.

Police identified the shooter as Ismaaiyl Brinsley. He was found dead in a nearby subway station from a self-inflicted gunshot wound.

The gunman arrived in New York from Baltimore, but had a residence in Atlanta, Bratton said.

Police were investigating posts he allegedly made on social media. (Continue Reading.)

If you go to the BBC article here:

and search the text of the article, there is no word "islam", "muslim" or "quran" on there.

But hey this has nothing to do with Islam. Move along folks, nothing to see here.
The police force will be puzzled and black racial discrimination will probably top the list of motives for this unprovoked heinous crime.

In the end Islam comes out smelling like roses. We are doomed to never being able to tell the truth about Islam..... as long as we have three big O as POTUS.

Our hearts and prayers go out to the families of the slain officers.

christianity will always seek to dominate the world by the Love of God; in true righteousness and holiness.
.
Islam will always seek to dominate the world by violence: in oppression of political sharia
.
There is no law against love.....which brings joy and peace in the hearts and minds of all.
.
There are laws against violence and political ideology's that bring misery
.
why oh why will not the international community ban sharia and verses in qur'an that promote this misery?
.
note: somehow someway christianity survived the massacre of pagan rome, the tyranny of papal rome, the oppression of lords in feudal system, the secular wars, world war 1 and 11 and the modern world, and now almost 3 billion people believe in incarnation, cross and resurrection and through it all I believe there has always been symbolically 7000 who would not kneel to baal; a true remenant of saints who have been obedient to the gospel. This world belongs to the 'prince of the air' who exercises dominion by force; but the weapons of war for saints are not carnal...and in the end WE PREVAIL though outwardly it does not seem so.

Do you want to do a round 2 debate on ISIS? I am all for it. Name your debates and I accept them.

So now the guy is an Islam scholar to you, David Wood? Why don't you post our ISIS debate where I have thoroughly refuted all of the bogus nonsense that you and the anti-Islamics keep posting about Islam?

Osama said: "David, when will you post our ISIS debate?"

I'll post it when ABN posts it, just like I did with the other debate. Not sure how you expect me to post something I don't have yet.

"Osama said: "David, when will you post our ISIS debate?"

I'll post it when ABN posts it, just like I did with the other debate. Not sure how you expect me to post something I don't have yet."

But you recorded it using your camera. And you have your own Youtube Channel. Even my debate with CL was not posted on your channel as you regularly do.

So, what is your say?

I want to know what ISIS does, that Muhammad didn't. Also why 90% of all terrorist organizations are islamic if Islam is all about peace? Why we don't see that much terrorists in all other religions together?

“I will still smash all of the nonsense that you post against Islam on ISIS, nonetheless”. - Osama

@Osama Abdallah,
1) You know the truth that you can smash everything with your mighty power and money, but you cannot smash people’s love for words of True God with your sword. That is why Christians are digesting all these Islamic terrorism around the world without a fight, as Christ did in the CROSS without a single word for His prosecution. Because of His suffering at Cross, He is glorified by Almighty God and is now sitting right hand of God.

2) You cannot deny today, what Muhammad did 1,400 years ago, smashed people’s freedom of religion by his words in Quran. But still Christianity is No. One religion in the World comprising about 2 billion people.

3) We do not need debate to proof Muhammad’s atrocities towards civilization and freedom of religions by his sword. Historical facts about Islamic terrorism for political power in the past (Shia/Sunni fight) and present ISIS’ atrocities as well as Muhammad’s own words in the Quran bears burning witness for Islam’s ferocious activities for past, present and future.

4) Quran’s word speaks for volume. In Quran chapter 9:29 it says “Fight those who do not believe in Allah or in the Last Day and who do not consider unlawful what Allah and His Messenger have made unlawful and who do not adopt the religion of truth from those who were given the Scripture - [fight] until they give the jizyah willingly while they are humbled.

5) Muhammad’s child marriage nine year old Ayşe daughter of Ali and Muhammad’s marriage of his adopted son’s wife cannot be accepted as lawful as Quran suggested. It is nothing but sexual perversion and acts of DEVIL. Today’s ISIS sex slavery for minority women as shown in BBC news today imply nothing but modern day cruelty as done by Muhammad of Islam in 1,400 years before.

6) God is Truth, Righteous and Justice for all humankind whom He created. All biblical prophets of past spoke for truth of God to guide His followers to be holy like Him. God’s truth is true even in today’s standard. But Muhammad commanded devil’s message in Quran such as to kill Christians and Jews, making non-Muslim women as sex slave what is ISIS doing now in Iraq. Do you, Osama, believe it is lawful as per True Almighty God, as said in Quran 9:29????

7) Are you a madrassa educated? If not, do you still need to debate with David to waist his time to debate with devil’s garbage Muhammad put in Quran and told you to swallow and believe it without reasoning. As a result of Quranic message, all these today’s horrible massacres against humanity including killing of yesterday’s two NYPD officers (New York police), are now happening and future killings to come.

8) If you really love God of truth, listen voice of living words in the Bible and follow its instruction to find eternal life. It is 100% guaranteed, you would be in heaven, otherwise your eternal death in hell fire is sure no one could protect you, except Jesus Christ.

Wish Merry Christmas to all people of earth thru “Answering Islam”!!!!!

Osama said: "But you recorded it using your camera. And you have your own Youtube Channel."

This is getting old, Osama. I recorded on a personal camcorder as a backup; ABN recorded on professional cameras from multiple angles. Why in the name of common sense would I post my camcorder version instead of waiting for a professional version?

Since you're resorting to posting pointless accusations and personal attacks (not to mention wasting my time), consider yourself banned again until you learn some manners.

@Osama
You have done the posting and we have seen and listening to your nonsense as ever. You could have told David before the debate that you're only coming to the debate to play video cos your video do much of the talking for you.
I found nothing worthwhile in your debate than blaming the Jews for everything.

Take my advice, in your next debate with David Wood, do the talking yourself and don't waste people"s time by playing some video that was posted on YouTube. I can also do a video about you saying you're a Jewsih disguise as a muslim and with your low mind of reasonging blieve it.
God bless you and may Jesus reveal Himself to you in a way that you'll understand. Shalom

Hey David, you might be interested in this article by an Australian newspaper, maybe the journos are finally opening their eyes?