If the United States were to capture Muslim children, torture them, and force them to learn the Bible, it would be on every news program in the world, all day, every day, for months. But the world has much lower expectations for jihadists, so torturing children and forcing them to learn the Qur'an is only a minor story. 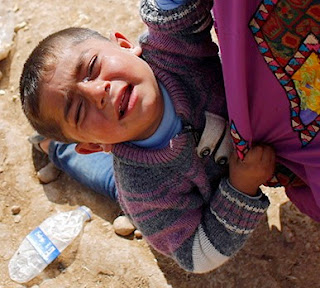 Syria—Islamic State militants beat Kurdish children as young as 14 with cables, forced them to watch videos of IS beheadings and made them intensively learn the Koran during months of captivity, Human Rights Watch reports, saying it amounts to war crime.

The children, aged 14 to 16, were abducted by the Sunni Muslim militants on May 29 as they travelled home to the border town on Kobani after taking school exams in the city of Aleppo.

Islamic State (IS, also known as ISIS or ISIL) released around 100 girls within a few hours, but held onto 153 boys, which they kept in a school in Manbij, 55 kilometers southwest of Kobani.

Around 50 of the boys either escaped or were released between June and September, with the final 25 let go on October 29.

Four boys who were released in late September and who escaped into Turkey were interviewed by Human Rights Watch and told the story of their ordeal.

The teenagers were divided into eight groups, each with a different classroom where they slept. Each child was given three blankets, was fed twice a day and was allowed to have a bath once every two weeks.

According to the boys, Islamic State guards beat any of the children who tried to escape, did poorly in the mandatory religious lessons or did anything else regarded as misbehaving. Especially nasty treatment was reserved for boys whose parents belonged to the Kurdish People’s Protection Units (YPG), which is responsible for defending Kobani from the Islamic State onslaught.

“It was really those whose families were close to the YPG who suffered most. They [ISIS] told them to give them the addresses of their families, cousins, Uncles, saying ‘When we go to Kobani we will get them and cut them up.’ They saw the YPG as kafir [unbelievers],” said one of the boys, aged 15.

Another lad was strung up in a hoist with his hands tied behind his back and a foot tied to his hands for saying “Oh, mother!” when he was busted in another boys room. He was told by his jihadist captors that he should have called out to God and not his mom.

The kids were forced to pray five times a day and if they didn’t learn the Koran to their captor’s satisfaction then they got a beating.

"They sometimes found excuses to beat us for no reason ... They made us learn verses of the Koran and beat those who didn't manage to learn them. Those who didn't conform to the program were beaten. They beat us with a green hose or a thick cable with wire running through it. They also beat the soles of our feet," one of the boys told the rights group. (Continue Reading.)

ISIS is a Zionist conspiracy aimed to:

Youtube how ISIS oil ends up in Israel. Like 9/11, this is nothing but a big Zionist lie! And another 9/11 is coming up to America by the Zionists. Youtube "Another 9/11" and see what Dick Cheney and others said.

Osama grow up please. No wonder why people make jokes about you.

Discover the most popular people ranked on Celebrity birthdays.