So the Obama Administration is limiting the campaign against ISIS to airdrops and airstrikes, and the administration can't even get that right. 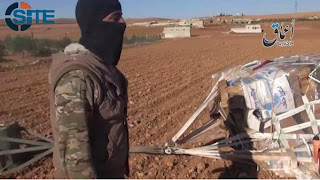 Washington Post—The Islamic State has released a new video in which it brags that it recovered weapons and supplies that the U.S. military intended to deliver to Kurdish fighters, who are locked in a fight with the militants over control of the Syrian border town of Kobane.

The SITE Intelligence Group, which tracks jihadist social media accounts, drew attention to the video Tuesday. At one point, it appears to show a masked militant raking his hands through a crate filled with hand grenades.

A U.S. Central Command spokesman said he was looking into the reports. In a news release Monday, U.S. military officials acknowledged launching one airstrike near Kobane that they said destroyed “a U.S. airdrop of Kurdish supplies” to prevent “these supplies from falling into enemy hands.” 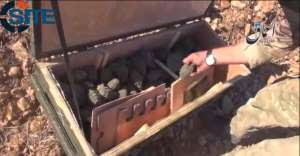 “All other resupply bundles were successfully delivered,” the CENTCOM news release said, without specifying what was in the shipment.

On Tuesday, the U.S. military announced another four airstrikes near Kobane, saying it hit Islamic State fighting positions, a building occupied by the militants, and “a large ISIL unit,” using one of the acronyms for the group. The U.S. has launched dozens of airstrikes around Kobane in the last week, as the militants besiege the town.

The incident highlights the difficulty in making sure all airdrops are accurate, even with GPS-guided parachutes that the Air Force commonly uses. Airdrops of food and water to religious minorities trapped on mountain cliffs in northern Iraq in August hit the mark about 80 percent of the time, Pentagon officials said at the time. (Continue Reading.)

it could be that the usa rigged those weapons to explode in hands of isis?.....just a thought

With the track record of the US "commander in chief" Obama may I ask, perhaps somewhat cynically:

By categorically ruling out ground troups and insisting on "modest" airdrops, did this very suspicious POTUS ensure himself an "alibi"? Who cannot see how much he seems to work in tandem with his friend Adolf Erdogan?