After a brief absence, jihad has returned to New York City.

Columbia University graduate Zale Thompson was shot to death after attacking New York City police officers with a hatchet yesterday. In case you're thinking that this is yet another instance of "workplace violence," here's a screenshot of Thompson's Facebook page:

In the comments section of a video titled "Uprise of the Khilafah World Wide," Thompson posted:


If you’re looking for “perfect” muslims who never make any mistakes in their Jihad, then you will be looking in vain! If the Zionists and the Crusaders had never invaded and colonized the Islamic lands after WW1, then there would be no need for Jihad! Which is better, to sit around and do nothing, or to Jihad fisabeelallah!﻿

How many more of these "lone wolf" attacks will there need to be before we can finally have an open, honest discussion about Islam? 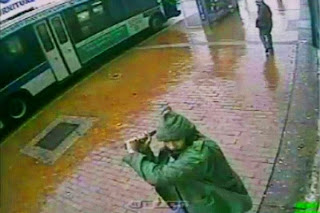 New York (CNN)—A man charged at four New York police officers with a metal hatchet Thursday, hitting two of them at a time of high alert for authorities concerned they might be targeted in the United States and Canada.

The suspect was hiding behind a bus shelter as if he was waiting to attack the officers, according to a law enforcement official, who said it almost appeared as if he was stalking them. The officers were posing for a photo when the man pounced, police Commissioner Bill Bratton said.

He struck one officer in the right arm and another in the head, according to the commissioner. The two officers who weren't hit then shot at and killed the attacker.

The law enforcement official identified the suspect as Zale H. Thompson, who had a criminal record in California and had been discharged from the Navy for misconduct, according to the source.

A 29-year-old bystander who was struck by a bullet in the lower back was also taken to a hospital. Her condition was not known.

Authorities are looking to see if the unprovoked attack, in the New York borough of Queens, is tied to recent calls by radicals to attack military and police officers, law enforcement officials say.

Asked about a possible connection to terrorism, Bratton said, "There is nothing we know as of this time that would indicate that were the case. I think certainly the heightened concern is relative to that type of assault based on what just happened in Canada." (Continue Reading.)

For a brief introduction to Muhammad's teachings about violently subjugation non-Muslims, watch this:

Aside from further investigation to determine Thompson's associates and contacts, we can definitively file this under Islamic terror.