Despite U.S. Airstrikes, ISIS Is Growing

More than a thousand foreign Muslims are pouring into Syria every month to join ISIS. Where are these Muslims getting the idea that they should join a group like ISIS? Didn't they hear from President Barack Obama and Prime Minister David Cameron that ISIS is violating the teachings of Islam? It's as if these Muslims aren't getting their information about Islam from Western politicians and the media. 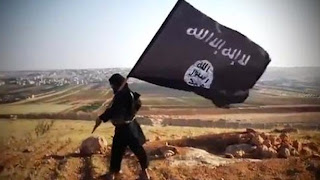 Washington Post—More than 1,000 foreign fighters are streaming into Syria each month, a rate that has so far been unchanged by airstrikes against the Islamic State and efforts by other countries to stem the flow of departures, according to U.S. intelligence and counterterrorism officials.

The magnitude of the ongoing migration suggests that the U.S.-led air campaign has neither deterred significant numbers of militants from traveling to the region nor triggered such outrage that even more are flocking to the fight because of American intervention.

“The flow of fighters making their way to Syria remains constant, so the overall number continues to rise,” a U.S. intelligence official said. U.S. officials cautioned, however, that there is a lag in the intelligence being examined by the CIA and other spy agencies, meaning it could be weeks before a change becomes apparent.

The trend line established over the past year would mean that the total number of foreign fighters in Syria exceeds 16,000, and the pace eclipses that of any comparable conflict in recent decades, including the 1980s war in Afghanistan.

U.S. officials have attributed the flows to a range of factors, including the sophisticated recruiting campaigns orchestrated by groups in Syria such as the Islamic State and the relative ease with which militants from the Middle East, North Africa and Europe can make their way to that country. (Continue Reading.)

Proven again Islam cannot be defended. Which means, if it is not sustained by the Devil himself, I don't how who does. It still baffles me how Muslims can close their minds on honest discussion about Islam when they can basically open their minds to other things. This includes people like Obama. If ISIS is not Islam then why is it growing? This the potent question.

to diacritic
.
yes it baffles me too how muslims can close their minds on honest discussions....
.
let me offer the following: in islamic theology we find that only the muslim is the best of creatures.....and so by default everyone else is lower in estimation with the jewsnd christians? being the worst of creatures
.
The buddist is pagan....the hindu's are pagan....the sikh's are pantheism with lip service to hinduism and islam, and muslims know sikh's stay away from muhammad in favor of guru nanak....the christians are accused of being polytheist....so are the jews who are also hated to a fault......
.
so when muslims see their religion being theologically destroyed they have no where to go......in their minds
.
plus and even more stronger points is that the cultural and theological threat of the pain of death for apostasy lurks in every shadow where the muslim walks.................plus the family connection must be huge..........finally there this real and present spirit of deception which permeates the infected mind of the muslim who drinks deep of islamic theology
.
the colour of islam is green......and you know what Kermit the frog used to say?.....its not easy being green....lol

George Bush admitted that BOMBS were planted in the World Trade Center Buildings:

Still not convinced that this whole 9/11 and ISIS are a lie? I hate to say this, but stay tunned for the "ANOTHER 9/11" as they explicitly promised.