I'm confused. Mufid Elfgeeh is a U.S. citizen and owns a business in Rochester, New York. Surely he must have seen politicians and reporters repeatedly proclaim that Islam is a religion of peace and tolerance and that terrorism has nothing to do with the teachings of Muhammad. How could such a person ever conclude that Allah commands him to "fight those who do not believe in Allah" (Qur'an 9:29)?


CNN—A man who owns an upstate New York food store funded ISIS, tried to send jihadists to Syria to fight with the terrorist group and plotted to do some killing himself—by gunning down U.S. troops who had served in Iraq—federal authorities alleged Tuesday.

Mufid A. Elfgeeh, 30, was arrested on May 31, though federal officials didn't outline the case against him until Tuesday. According to an indictment, he faces three counts of trying "to provide material support to a foreign terrorist organization" (namely, ISIS), one count of attempting to kill officers and employees of the United States, two counts of having an unregistered firearm silencer and one for possessing guns or silencers "in furtherance of a crime of violence."

The public defender representing Elfgeeh, Mark Hosken, said Tuesday that he had seen the indictment and will enter a plea of not guilty when his client appears in court on Thursday morning.

The federal investigation into Elfgeeh began in early 2013 and a world away from the Middle East, where ISIS (also known as ISIL and the Islamic State) has waged a brutal campaign in recent years. Citing the terror group's threat to the region and gruesome tactics—such as the recent beheadings of two American journalists—the U.S. government has struck ISIS targets from the air in Iraq and threatened to go after it in Syria as well. 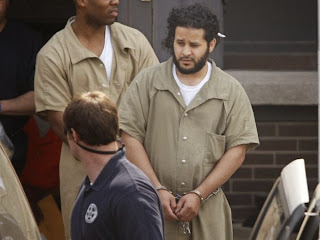 A look at Twitter suggests that Elfgeeh didn't stand with his adopted country in this fight, according to an affidavit in support of a search warrant in his case.

He allegedly wrote in one tweet: "Al Qaeda said it loud and clear: we are fighting the American invasion and their hegemony over the earth and the people." In another message, Elfgeeh purportedly stated ISIS "will one day rule the world with the will of Allah."

The affidavit alleges that he urged people to donate a third of their salary or, at least, "#Five_thousand_dollars_from_every_household" (as stated in one tweet)—stressing the importance of supporting groups like ISIS financially.

But the Yemeni-born owner and operator of Halal Mojo and Food Mart, dubbed Mojoe's by some, in Rochester may have wanted to be more than just a financial supporter. Court documents state that—if he couldn't sell his store—Elfgeeh wanted to export "those who are fed up (and want) to go to war and be jihadists."

The FBI informants were among those Elfgeeh actively recruited to join ISIS as jihadists, the affidavit states. He helped them by doing things like paying one of their passport costs, coordinating travel arrangements and setting them up with contacts in the terror group under the guise of going "to the university," which was code for joining ISIS. (Continue Reading.)

For a brief introduction to what Islam teaches about non-Muslims, watch this:

Good thing this guy was caught before he was able to do any harm. Now he needs to be punished to the fullest extent of the law.

Muslims can counter this entire post with the usual.

1) Those are only the bad Muslims, most Muslims are good Muslims.

2) There are violent verses in the Qua'ran but there are also peaceful verses. It is the same in the Christian bible. The old "shopping cart" excuse.

The Religion of Zombie Warriors.

Are there any Christian groups today that go and kill In The name of Christianity? Don't good muslims think why these bad Muslims are doing these things. We are not talking about a 1000 people doing this we are talking up towards the hundred thousands? If Christianity had groups of that number doing this, I would really have to think about what in the Bible would make them do such things, then I would have to reevaluate my beliefs.

Some people might wonder how the ISIS gets funded, well one way is that the ones that are here in the US that have businesses they send money to thier families back home and then their families then fund the ISIS. This goes on everyday, they come take jobs away from us to fund the terrorist.