Women and children who refuse to convert to Islam are being buried alive by the Islamic State (ISIS). The Islamic State only has this power because the United States and its allies stopped Assad from wiping them out in Syria. Behold the fruits of U.S. foreign policy. 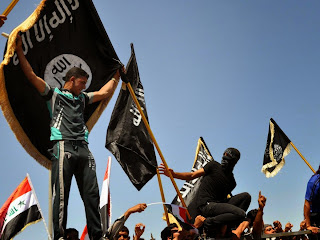 Mohammed Shia al-Sudani said the Sunni militants had also buried alive some of their victims, including women and children. Some 300 women were kidnapped as slaves, he added.

"We have striking evidence obtained from Yazidis fleeing Sinjar and some who escaped death, and also crime scene images that show indisputably that the gangs of the Islamic States have executed at least 500 Yazidis after seizing Sinjar," Sudani told Reuters.

Sinjar is the ancient home of the Yazidis, one of the towns captured by the Sunni militants who view the community as "devil worshipers".

"Some of the victims, including women and children were buried alive in scattered mass graves in and around Sinjar," Sudani said. (Continue Reading.)

Islamic moderates respond to Islamic mass murder by attacking Yazidis in Germany who complained about other Yazidis being murdered in Iraq.

shows the true nature of islam and it's followers. and muslims keep on,lying saying islam is peace.
what....no worldwide protests against these atrocities as they did towards Israel?