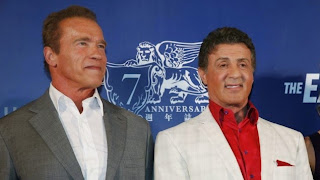 Nearly 200 people from the entertainment industry (including Sylvester Stallone, Arnold Schwarzenegger, and many others) have signed a statement condemning the seventh article of the charter of Hamas as an "ideology of hatred and genocide." The statement reads:


We, the undersigned, are saddened by the devastating loss of life endured by Israelis and Palestinians in Gaza. We are pained by the suffering on both sides of the conflict and hope for a solution that brings peace to the region.

While we stand firm in our commitment to peace and justice, we must also stand firm against ideologies of hatred and genocide which are reflected in Hamas’ charter, Article 7 of which reads, “There is a Jew hiding behind me, come on and kill him!” The son of a Hamas founder has also commented about the true nature of Hamas.

We join together in support of the democratic values we all cherish and in the hope that the healing and transformative power of the arts can be used to build bridges of peace.

Interestingly, the quotation from article seven was taken directly from Muhammad himself. Hence, all of these entertainers have condemned Muhammad, Islam, and the Quran. For a complete list of signers, click here.

Here are my thoughts on the issue:


And here are the sources cited in the video:


Qur’an 4:34—Men are in charge of women, because Allah hath made the one of them to excel the other, and because they spend of their property (for the support of women). So good women are the obedient, guarding in secret that which Allah hath guarded. As for those from whom ye fear rebellion, admonish them and banish them to beds apart, and scourge them. Then if they obey you, seek not a way against them. Lo! Allah is ever High, Exalted, Great.

This verse isn't entirely clear, until we examine the historical background:


Sunan Abu Dawud 2150—The Apostle of Allah sent a military expedition to Awtas on the occasion of the battle of Hunain. They met their enemy and fought with them. They defeated them and took them captives. Some of the Companions of the Apostle of Allah were reluctant to have intercourse with the female captives in the presence of their husbands who were unbelievers. So Allah, the Exalted, sent down the Qur’anic verse: “And all married women (are forbidden) unto you save those (captives) whom your right hands possess.” That is to say, they are lawful for them when they complete their waiting period.

Sahih Muslim 6985—Allah’s Messenger said: The last hour would not come unless the Muslims will fight against the Jews and the Muslims would kill them until the Jews would hide themselves behind a stone or a tree and a stone or a tree would say: Muslim, or the servant of Allah, there is a Jew behind me; come and kill him; but the tree Gharqad would not say, for it is the tree of the Jews.

For more on Hollywood's condemnation of Hamas (and Muhammad), see the following articles:

The last days are surely upon us, as the 'rocks' and 'trees' that Mohammed spoke of are none other than our own western media, and western politicians.

They readily condemn Israel for defending itself, but not a squeak to condemn Muslims committing atrocities against other religious minorities.

Jews are being targeted all over Europe, but absolutely nothing is being said or done to protect them of to punish the rabid followers of Mohammed. In fact in most cases, their silence is deafening, equivalent to shouts that expose persecuted minorities throughout the middle East and now in Europe.

These useful idiots, (which also includes leftist "liberal" Obama kiss-a$$ Jews) are like Mohammed's rocks and trees, shouting out to Muslims, " there is a Jew hiding behind me, come and kill him..."

Don't hold your breadth for Hollywood to join in the fight against the evils of Islam. How long before we will hear apologies from these cowards in Hollywood who blindly became signatories of a document they did not even bother to research themselves.... If not than kudos to them!

Your Site Is an eye opener for those who has no knowledge of Islam, particularly for Muslims, like Myself Ex- M, and may others out there.

Your message reached every corner of the Muslim world already and the change is beyond words. You did greate JOB , now you can retire 100%. .

Your job is carrying out by millions without your knowledge.

Khin Maung, why should Brother David Wood retire when he is doing a great job and when clearly he is still needed to bring the truth to muslims (like yourself)??
Change is beyond words? You got that right, look at isis, boko haram, alqaeda etc etc.

Do you have a transcript of this wonderful video for purposes for easy dissemination? Want to share it via plain text mass email to my personal mailing groups.

CG in films show us a new magical world. Have you ever wonder about the real heights of actors who play Hobbits in Lord of the Rings? You can find the answer on celebrity heights with some clicks.

I am ruined by difficulties in my studies, the curriculum is getting worse, writing in nursing profession will help you complete the most difficult essays and necessary written work for a small price competently and efficiently

Hey! They have exceptional writing skills. Our professional paper writers create the best essays for sale because they have professional writer research skills, excellent spelling and grammar, and knowledge on relevant software and platforms.