The Qur'an commands Muslims to punish those who "make mischief" in a Muslim land:


Qur'an 5:33—The punishment of those who wage war against Allah and His apostle and strive to make mischief in the land is only this, that they should be murdered or crucified or their hands and their feet should be cut off on opposite sides or they should be imprisoned; this shall be as a disgrace for them in this world, and in the hereafter they shall have a grievous chastisement.

Sadly, the crime of "making mischief" is so vague that Muslims can use this verse as justification for killing nearly anyone, including reporters like James Wright Foley.

Of course, simply by paying taxes to the U.S. government, Foley would be guilty of funding the enemy's military, which is also a death penalty.

Journalists need to be careful around jihadist groups that know the Qur'an. 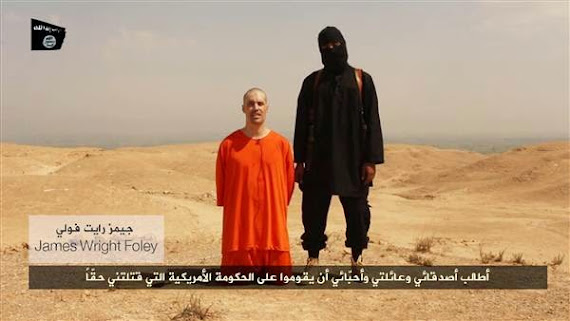 NBC News—The Islamic State of Iraq and al-Sham (ISIS) claims to have beheaded an American photojournalist and has threatened the life of another American if President Obama doesn't stop airstrikes in Iraq.

A graphic video obtained by NBC News purportedly shows James Wright Foley, a freelance reporter for the U.S.-based news service GlobalPost who was kidnapped while reporting from Syria two years ago, reciting threats against America before he is executed by an ISIS militant.

Foley was kidnapped at gunpoint near the town of Taftanaz in northern Syria on Thanksgiving Day in 2012. He had not been heard from during his time in captivity. "We’ve heard nothing. Nothing. We last knew that he was abducted on Thanksgiving Day in the Idlib province, but we don’t know who took him or why," Foley's father, John, said on TODAY last year. (Continue Reading.)

To learn about jihad, watch this:

It is the Quran 5:34 not 5:33. And like all things the book must be read in context... 5:35 continues to read about Allāh's forgiving nature and how merciful Allāh [God] is. Yet the beheading of James Foley does not seem forgiving nor merciful!

You say that the next verse refers to how forgiving Allah is, and that the Islamic State was wrong for not being forgiving. But let's read the verse:

"Except for those who repent before they fall into your power: in that case, know that God is Oft-forgiving, Most Merciful."

The verse refers to people who repent and turn to Islam before they are captured. So do you have evidence that Foley repented and became a Muslim before he was captured by ISIS? If so, you're apparently practicing taqiyya.

The behavior of muslims does not shock me anymore. What will truly be shocking is when they claim to be a religion of peace and actually behave in a peaceful manner. So far, they've only proven to be savage, bloodthirsty monsters and it seems that they are incapable of being anything else

By their fruits you shall know them.. Look at everything happening in the Islamic world. I dont see a religion of peace.