Muslim organizations like CAIR and ISNA routinely condemn people who draw attention to Islamic honor killings. But if we don't draw attention to the practice, it will continue indefinitely. How in the name of common sense can we be "intolerant" and "bigoted" for defending Muslim women and girls? 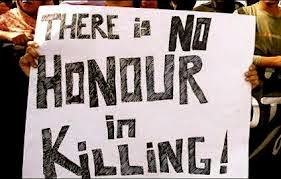 (CNN)—A young newlywed couple in northeastern Pakistan died a horrible death at the hands of the bride's family in the latest honor killing in the nation, police in Pakistan said Saturday.

The couple, identified as Sajjad Ahmed, 26, and Muawia Bibi, 18, were married by a Pakistani court on June 18 against the wishes of the Bibi family, Punjab police official Mohammad Ahsanullah told CNN.

On Thursday, the bride's father and uncles lured the couple back to the village of Satrah in Punjab province, where Ahsanullah said the pair were tied up and then decapitated.

Despite the fact that there were no outside witnesses, family members turned themselves in to police and are now jailed in the Sialkot district of Punjab, Ahsanulluh said.

Such killings often originate from tribal traditions in Pakistan and usually happen in rural areas. Human rights activists said bystanders, including police, don't often interfere because the killings are considered to be family matters.

According to the United Nations, some 5,000 women are murdered by family members in honor killings every year. However, women's advocacy groups believe the crime is underreported and that the actual death toll from this all too common crime is actually much higher. In Pakistan, 869 women were victims of honor killings last year, according to the country's human rights commission. (Continue Reading.)

I strongly considered converting to Islam in 1996 until I looked at the other side of the debate, namely the naysayers. In specific this page which started me on a long search into the evil depths of the religion: http://answering-islam.org/Authors/Newton/women.html

Since then I have acquired a number of Islamic books including some collections of Hadiths (Malik's Muwatta, Sunan Abu Dawud, and Jami at-Tirmidhi. I'm hoping to get Fatawa Islamiyah in the future as well as a collection of Bukhari with verdicts. The more people know how evil this is, the more they can be warned.

That said, I've yet to see where these honor killings are Islamic. I've not come across a single Islamic source that gives a green light to this behavior, so I'm wondering why they are mentioned in condemnations and refutations of the Islamic faith.

If you're looking for a direct command (e.g., "Kill daughters for the sake of honor"), you're right that that there isn't one. But this does't mean that Islam doesn't promote honor killings. Here's an outline of why honor killings are so prevalent in the Muslim world:

So, if a man's daughter adopts a non-Islamic lifestyle, he is to treat her as an apostate and kill her.