In 2009, the Organization for Economic Co-Operation and Development released its Report on Gender Equality and Social Institutions. The organization rated countries around the world based on their level of discrimination against women. When it comes to treatment of women, the Islamic Republic of Iran ranked among the most oppressive countries in the world.

Not surprisingly, Islamic extremist blogger Yahya Snow praises Iran for its treatment of women, going so far as to say that America needs to be more like Iran. 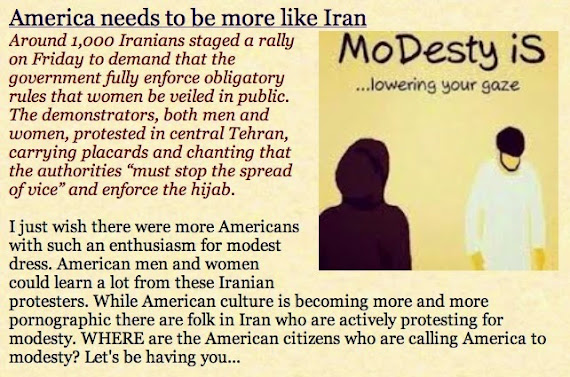 Notice that the excerpt Yahya posts doesn't simply promote modesty, but the government enforcement of veils for women. In other words, women who don't comply with an Islamic dress code are to be punished by the government, according to Yahya.

And Yahya says that America needs to be more like Iran.
Posted by David Wood at 5:50 PM

SNOWMAN is making me think he took a leaf out of osama abdullah books.


Lets look up what pornographic means on dictionary.com

Since according to Yahya anything that doesn't involve a Hijab and full body cover is not modest and pornographic.

Since adherents of islam find even women wearing short sleeve is pornographic. One goes to question about if the rape gangs are muslims which snowman has constantly been denying with the difference of actually falling to temptation.

@David
Has yahya made any arrangements with you since he has agreed to debate a while ago?

For us muslims Iran is an apostate state because they are shiites. But we are supporting in general such initiatives.
Enforcing hijab is also talmudic and biblical. So you should not make fun of it.

Jukti,
Hijab isn't biblical rather it is created by calipha Umar who requested Muhammad to receive a verse that enforces hijab on Muhammad's wives. Then, when Muhammad ignored his request, Umar used to follow Muhammad's wives even during night times. That is when Muhammad wanted to be relieved from Umar's aggressive approach and then he (Muhammad) fabricated the verse of hijab... read –

Narrated 'Aisha: The wives of the Prophet used to go to Al-Manasi, a vast open place (near Baqia at Medina) to answer the call of nature at night. 'Umar used to say to the Prophet "Let your wives be veiled," but Allah's Apostle did not do so. One night Sauda bint Zam'a the wife of the Prophet went out at 'Isha' time and she was a tall lady. 'Umar addressed her and said, "I have recognized you, O Sauda." He said so, as he desired eagerly that the verses of Al-Hijab (the observing of veils by the Muslim women) may be revealed. So Allah revealed the verses of "Al-Hijab" (A complete body cover excluding the eyes). (Sahih al-Bukhari, Volume 1, Book 4, Number 148)

Do you think that the bible would allow the dress of women today?
Many jewish women have a head scarf and christian women had to wear a head scarf while being in the church.

Why don't you go back and live in the first century? Or better still, the seventh century with your false prophet.

Definitely. What you wear reflects your culture and God doesn't dictate and oblige you to follow someone's cloth or hair style - in this case 7th century women outfit which is designed by calipha Umar. Have you been in places where women are seen naked in public such as in Western Ethiopia, the Andaman tribe in India, and in the Amazon jungles? That is their culture and nothing happens to them unless if calipha Umar is still alive, walking into their villages, and harasses them or Iranian Mula or Saudi’s sheks arrest and torture them …
BTW, Headscarf and hijab are completely two different things and reasons for wearing them also are different.

The hijab is not sanctioned anywhere in the Qu'ran and it is not modest dress, it is over the top humiliation.

So out of a supposedly 1.5 billion muslims only 1000 could be bothered to march? It does speak volumes about their desperation to cling to any faith in their belief system. I guess forcing people to wear this depressing garments would make it look like islam wasn't dying.

@Jukti - Wearing a head covering was normal in the time when Mary lived, but it's more a cultural issue than a religious one. Requiring women to don head coverings is not only anti-women, it also goes against the ability of women to make their own decisions of faith rather than have it dictated. Ditto for full body covering a la Taliban. A woman can be covered head to toe and have an evil heart! It does not take clothing to have the heart of Mary. I think you rethink your religion's attitudes about women.

Oh, and watch this http://youtu.be/dOPPSFZ0NDU -

The hijab is contrary to the New Testament. Paul wrote that a woman should be covered but referred to her hair as the covering, not any type of cloth. He also wrote concerning the body that our presentable parts have no need of covering. The face is certainly included in that. The unpresentable parts would be essentially the pudenda.

Maya Angelou knew the difference between modesty, which can hide and nourish great arrogance, and genuine humility.
Never confound virtue with self-erasure. She or he who is hidden, whether by veils or lies, is easily the minion of Satan by way of arrogance.

It’s sad but true that women have lost respect and dignity in Muslim nations where Theocracy is on rise. Read- Velayat-e Faqih

Here is the Fathers Day Quotes 2019 for all papa lovers.