Just a few months ago, a female college student died in Saudi Arabia because administrators at King Saud University delayed male paramedics who came to treat the girl. Similarly, in 2002, 15 young girls died in a school fire when the Saudi religious police blocked them from exiting in order to "guard their modesty." A girl's modesty, it seems, is more important than her life.

America's self-appointed religious police, the Council on American-Islamic Relations (CAIR), couldn't agree more. CAIR has filed a civil rights complaint against "Boomers!" amusement parks for not allowing women and girls to wear scarves or other headgear while riding go-karts. CAIR apparently believes that protecting young girls from strangulation is contrary to the teachings of Allah and Muhammad. 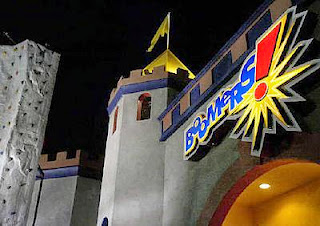 Santa Clara, California—On Tuesday, April 29, the California chapter of the Council on American-Islamic Relations (CAIR-CA) and UNITED SIKHS will hold simultaneous news conferences in Anaheim and Santa Clara to announce the filing of multiple public accommodation complaints with the California Department of Fair Employment and Housing (DFEH) against Boomers! amusement parks, a subsidiary of Palace Entertainment Holdings.

The complaints allege violations of California's Unruh Civil Rights Act based on Boomers! unwillingness to permit park attendees wearing religious head coverings from riding Go-Karts. Both Muslim and Sikh park attendees have repeatedly been denied access to the rides. The company, citing unfounded safety concerns, has been unwilling to provide any accommodation, thereby effectively banning thousands of local residents from riding the Go-Karts solely based on their faith. (Continue Reading.)

Notice that, according to CAIR, safety concerns are "unfounded." But we know for a fact that hijabs can be dangerous, especially on go-karts. Consider the following story of a Muslim woman being strangled while riding a go-kart in Australia: 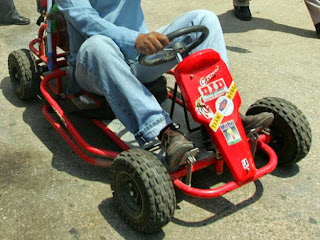 Telegraph—The woman, 26, suffered severe neck injuries and went into cardiac arrest after her hijab, which covers the head and neck, became stuck in the kart's machinery while she was driving at high speed.

Paramedics managed to revive the woman after material from the hijab tightened around her throat and she was airlifted to hospital, where she later died.

Local media reports said that her husband and children were at the track at the time.

Police have opened an investigation into the incident, which took place at the Port Stephens Go-Kart track on the New South Wales midcoast, and have seized the go-kart for forensic examination.

Detective Inspector Peter Fox of Port Stephens local area command told Fairfax news websites that the longer part of the scarf was wedged down near one of the go-kart's wheel axles.

"[It appears] the scarf was pulled across her throat ... from one side of the body to the other side," he said.

Police said the woman and her family had been holidaying in Port Stephens, a popular coastal town, prior to the accident.

Signs at the track warn visitors about inappropriate footwear and advises drivers that they use the track at their own risk. However, there are no regulations about scarves or head dresses. (Continue Reading.)

So the woman died because there were no regulations against scarves or head dresses? But those are exactly the sort of regulations CAIR is trying to abolish here in the U.S. I guess the lives of young girls, according to CAIR, aren't as important as their "modesty."

Email ThisBlogThis!Share to TwitterShare to FacebookShare to Pinterest
Labels: CAIR, Women in Islam

This makes honor killings clean and easy. Muslim women know they're in big trouble when their husbands take 'em to ride the go-carts.

CAIR should just issue all female members with a crossbeam and a rope and have done with it.