As Muslim organizations like CAIR and Muslim apologists like Yahya Snow continue to condemn anyone who speaks out against the atrocities that flow from the teachings of Muhammad, little girls continue to be victimized.

Of course, the only reason these grooming gangs have been able to flourish in the UK is that politicians, the media, and even victims are terrified of being labeled "racists," "bigots," and "Islamophobes."

It seems that British leaders and police tried to show how tolerant they were by turning a blind-eye to the rampant abuse of society's most vulnerable people. And this is precisely the sort of "tolerance" that is demanded by CAIR and Yahya. 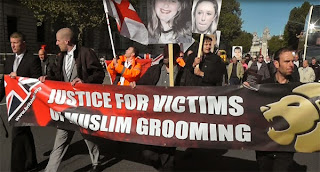 BBC News—A gang of men from Peterborough sexually exploited vulnerable teenage girls after targeting them on Facebook, a court has been told.

Prosecutor Patricia Lynch told Cambridge Crown Court the girls were singled out "because of their vulnerability".

She said they were given alcohol and used as "sex objects".

Opening the case against the defendants, Ms Lynch said the men liaised with the girls via Facebook, Blackberry Messenger and text messages.

After being "chatted up", the victims would be collected from near their homes in towns and villages around Peterborough, Rutland and Lincolnshire before being driven to secluded spots in Peterborough, Ms Lynch said.

She said many of the girls had "extremely troubled backgrounds".

"Their very young age, their vulnerability, the grooming process and the use of alcohol negates any consent that they may have given," she told the court.

"They were effectively used as sex objects by these defendants."

Yasir Ali, 28, of Grange Road, denies six counts of rape, two of making indecent photographs of children, one of sexual activity in the presence of a child, seven of trafficking and one of witness intimidation.

Akash Yasin, 18, of Gladstone Street, denies one count of sexual assault and two of trafficking.

James Daly, 25, of Grange Road, denies one count of rape.

Mohammed Aslam, 24, of Grange Road, denies one count of rape and one of sexual activity in the presence of a child.

The trial, which is expected to last up to eight weeks, continues. (Source)

To learn more about the Islamic rape-wave in Great Britain, watch this:

david you are crusade to save christianity from islam

i wish you good luck

"Prosecutor Patricia Lynch told Cambridge Crown Court the girls were singled out "because of their vulnerability".

She said they were given alcohol and used as "sex objects".

"They were effectively used as sex objects by these defendants.""


Poor girls. It's this kind of cases that makes me question my view on the death penalty. What to do with psychopaths who lack any kind of empathy?

This CAIR mob and people like Yahya Snow etc. have the victim’s blood on their own hands. As far as the guilt for these crimes go, and because they are actually providing support and help for the perpetrators, they may as well have been at the scene and directly involved in committing these crimes themselves.

In God’s eyes, they themselves are directly involved in these evil deeds committed by Islam.

In defending Islam, the likes of CAIR, Yahya and Co. are simply bidding the devil Godspeed and are partaking in his crimes, and will therefore also partake in his punishment (Revelation 21:8).

If there come unto you any and bring not this doctrine [of Christ: verse 9], receive him not into your house (or country for that matter), neither bid him Godspeed. For he that biddeth him Godspeed is a partaker of his evil deeds. 2John 11 (KJV)

But something that many criminals do not seem to be aware of, is that nothing that they do goes unnoticed, and that even if the law does not catch them they will still not get away with it.

Do not be deceived, God is not mocked; for whatever a man sows, that he will also reap. Galatians 6:7

And as Luther puts it:

“If you steal much, depend upon it that again as much will be stolen from you; and he who robs and acquires with violence and wrong will submit to one who shall deal after the same fashion with him. For God is a master of this art, that since everyone robs and steals from the other, he punishes one thief by means of another. Else, where should we find enough gallows and ropes?”

(from Martin Luther’s ‘Large Catechism’ (the Seventh Commandment). Also lends weight to the saying: “No honour among thieves”)

Some advice from the Almighty to all criminals/devil’s servants.

“But if a wicked man turns from all his sins which he has committed, keeps all my statutes, and does what is lawful and right, he shall surely live; he shall not die. None of the transgressions which he has committed shall be remembered against him; because of the righteousness he has done he shall live. Do I have any pleasure at all that the wicked should die?” says the Lord God, “and not that he should turn from his ways and live?”

“Their women are yours to take, legitimately. God made them yours. Why don't you enslave their women?”, Sheikh Saad al-Buraik exhorted his listeners.
Women not covered with a headscarf are “uncovered meat”, says Mufti of Australia, Sheikh Taj al-Hilali.
Such women are “asking to be raped”, says Mufti Shahid Mehdi in Denmark.

Like the other gangs of sex-slave takers, this gang are only doing as instructed in their “barracks”, their command and control centres, where Christians are not allowed in.

speaking of yahya
look at his latest out of context accusations. i found this immensely amusing

Apparently Yahya is now taking things out of context and getting himself shot in the foot. because both positions he takes destroys his position.

"CHAPTER XXVII.
The Heresy of the Ebionites

The evil demon, however, being unable to tear certain others from their allegiance them, for he draws his information largely from Justin Martyr to the Christ of God, yet found them susceptible in a different direction, and so brought them over to his own purposes. The ancients quite properly called these men Ebionites, because they held poor and mean opinions concerning Christ. For they considered him a plain and common man, who was justified only because of his superior virtue, and who was the fruit of the intercourse of a man with Mary. In their opinion the observance of the ceremonial law was altogether necessary, on the ground that they could not be saved by faith in Christ alone and by a corresponding life. There were others, however, besides them, that were of the same name, but avoided the strange and absurd beliefs of the former, and did not deny that the Lord was born of a virgin and of the Holy Spirit. But nevertheless, inasmuch as they also refused to acknowledge that he pre-existed, being God, Word, and Wisdom, they turned aside into the impiety of the former, especially when they, like them, endeavored to observe strictly the bodily worship of the law. These men, moreover, thought that it was necessary to reject all the epistles of the apostle [i.e., Paul], whom they called an apostate from the law; and they used only the so-called Gospel according to the Hebrews and made small account of the rest. The Sabbath and the rest of the discipline of the Jews they observed just like them, but at the same time, like us, they celebrated the Lord's days as a memorial of the resurrection of our Savior. Wherefore, in the consequence of such a course, they received the name of Ebionites, which signified the poverty of their understanding. For this is the name by which a poor man is called in Hebrew. (Eusebius, "Ebionites," Church History 3:27 exceprted A Select Library of Nicene & Post-Nicene Writings of the Christian Church (ed. Philip Schaff & Edward Wace)(Christian Literature Co.: 1890) Vol. 1 at 158-59.)"

Who in general, in our time, comes up with the idea of rape? If you want sex so much, then why not just use sites like best online sex chat, where you can find a partner for sex for one night? I honestly don't understand what's wrong with these people... Is there anyone here who can explain this to me?