Here in the West, Muslim groups (such as CAIR and ISNA) and Muslim apologists (such as Yahya Snow and Ijaz Ahmad) attempt to silence critics of Islam through character assassination (attacking the character of anyone who objects to child marriage, jihad, spousal abuse, female genital mutilation, etc.). In Muslim countries, leaders simply enforce sharia blasphemy laws. The penalty for blasphemy in Pakistan is death.

These blasphemy laws are also used to persecute Christians, even Christians who haven't said a word about Muhammad. 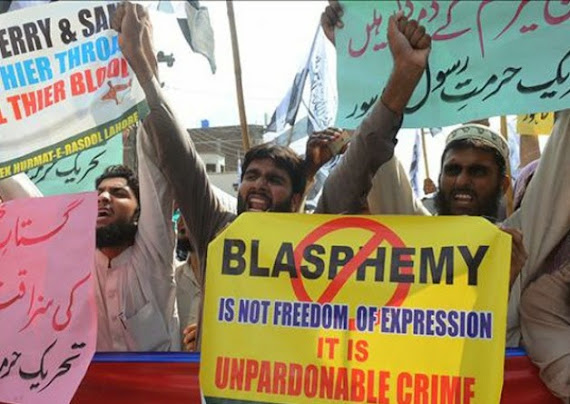 News Daily—A court in eastern Pakistan has sentenced a Christian couple to death for sending a blasphemous text message insulting to the Prophet Mohammed, their lawyer said Saturday.

The impoverished couple, who are in their forties, have three children and live in the town of Gojra, which has a history of violence against Christians, Hassan said.

Both denied the charges, Hassan said, adding that they would appeal the sentence.

Maulvi Mohammad Hussain, the prayer leader at a local mosque in Gojra, lodged a complaint against couple on July 21 last year for sending him a text message which he said was insulting to the Prophet Mohammed.

Hussain accused the husband of sending the message from his wife's cellphone.

However, defence lawyer Hassan said that the text originated from a cellphone which the couple had lost some time before the incident, so they could not have sent the message.

The defence lawyer said that the couple had suspected rivals of implicating them into blasphemy case to settle personal scores and that they had ties with the complainant.

Pakistan has extremely strict laws against defaming Islam, including the death penalty for insulting the Prophet Mohammed, and rights campaigners say they are often used to settle personal disputes. (Continue Reading.)

Why should anyone get into trouble for ‘blaspheming’ a great blasphemer like Muhammad? It doesn’t make any sense.

Blasphemy is a charge that can only be applied to the disrespect of the Almighty himself, not to some long dead pagan criminal like Muhammad, who was only a created man - here one minute and then gone the next.

To apply the charge of blasphemy to the 'disresepect' of an ordinary created man is in itself a great blasphemy in that it is trying to put a long dead criminal at the same highest level as the Righteous, Holy, Almighty Creator himself. THAT is blasphemy.

Just from that we can see that Islam is a purely idolatrous worship system to honor a criminal that has been turned into an idol. What a joke. One may as well join the Mafia and expect to get to heaven after a lifetime of crime.

But the… abominable, murderers… idolaters… shall have their part in the lake which burns with fire… Revelation 21:8

"However, defence lawyer Hassan said that the text originated from a cellphone which the couple had lost some time before the incident, so they could not have sent the message.

The defence lawyer said that the couple had suspected rivals of implicating them into blasphemy case to settle personal scores and that they had ties with the complainant. ."

Remember: whenever the Inquisition, which no longer exists, persecuted someone centuries ago (let's say, a muslim pretending to be a christian and plotting to support foreign attacks against his host nation) it was always, always out of christian intolerance as mandated by the Bible, not because of political and/or financial interests. But when islamic law is used nowadays to settle personal grudges and/or disputes we're not allowed to speak against it because it's based in the word of allah and therefore criticism of it would be considered religious intolerance, racism and islamophobic.

"Why should anyone get into trouble for ‘blaspheming’ a great blasphemer like Muhammad? It doesn’t make any sense."

Islamic law makes no sense. For example, the islamic definition of slander includes disclosing things that are disliked or who someone wouldn't want others to know about, so for all purposes under islamic law you can be condemned for speaking the truth.

We see a generic unholy trinity in Revelation of which Islam is a part.

The devil, who deceived them, was cast into the lake of fire and brimstone where the beast and the false prophet are. Revelation 20:10

This verse is referring to the antichristian world system as a whole and generically means ALL devils, beasts and false prophets like Muhammad. In fact Luther called the papacy the false prophet because it disguised itself behind Christ’s name and undermined Christ’s kingdom from within. That is, spiritual destruction. And Islam he called the beast because it openly defied Christ and destroyed by physical means, as we see happening today.

But they are still both working for the same devil, which is why they all end up in the same place.

I should also make a correction on my previous comment where I said:

“To apply the charge of blasphemy to the 'disresepect' of an ordinary created man who was not doing God’s will but the devils’ will, is in itself a great blasphemy in that it is trying to put a long dead criminal at the same level as Abraham, Moses and the prophets who were the genuine servants of the Righteous, Holy, Almighty Creator himself. THAT is blasphemy.”