Muslim organizations invented the term "Islamophobia" to silence critics of Islam. The result is that thousands of little girls have been abused while Muslim grooming gangs hide behind their shield of "Islamophobia." 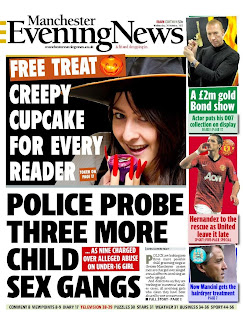 World News Daily—Under pressure from political correctness, authorities have allowed Muslim pedophile gangs in the United Kingdom to groom underage girls for sexual abuse for decades, victimizing as many as 10,000 schoolgirls, according to a report by an organization calling for an investigation.

“What we believe is required is a full-scale public inquiry,” the Law and Freedom Foundation said in the conclusion of its 300-plus page report, “Easy Meat: Multiculturalism, Islam and Child Sex Slavery.”

The group said the public inquiry “must look into the failures of national agencies, child-care charities, and academics to study this problem.”

“The inquiry must look into what police forces knew and when they knew these things. Is it true that Lancashire police knew about grooming gang activities in the 1970s? How much information did they have, and how credible was it? Why has the problem of the grooming of Sikh girls by these gangs been kept off the national agenda from 1988 to 2013? Did Islamic fundamentalist organizations encourage Muslim men to go out and deceive and groom non-Muslim women?”

The foundation said its report examines the grooming gangs activities, the connection to Islam and the scale of the problem.

The report says that 20 years ago, child-care professionals dealing with the victims made recommendations that could have protected the victims, but the steps have never been implemented.

The report, authored by Peter McLoughlin, says all sexual abuse of children is horrible, but the “phenomenon of gangs of men who loiter with impunity around schoolgirls, luring them into a life of addiction and prostitution is a distinct category of child sexual abuse, but a category that the authorities in Britain have deliberately ignored for 25 years.”

The report says the Muslim community has refused to condemn the crimes and to inform police that they were going on.

“Political correctness would be used to make sure that people did not speak about this phenomenon, enabling the perpetrators free rein to sexually abuse schoolgirls for decades. Yes, decades. We know that in an age where parents are not allowed to smack their children, this sounds unbelievable,” the report says.

Even though some details have appeared in reports over the last year or two, the full extent of the problem is stunning, the report says.

“In England, this epidemic of child-rape by grooming gangs has been going on since at least 1988,” it says. “Despite more than a decade of disinformation by child-care professionals, academics, and political activists, the earliest claims (1988 to 2003) were that the gangs were overwhelmingly Muslim. This massive over-representation of Muslim men in this crime spree has been borne out by the prosecutions of the last three to four years, but it is clear that it must have been known long ago and should have been made public.

“Because the predators were Muslims, the agencies who are responsible for child-protection have almost entirely failed in their job to protect vulnerable children. From a fear of being called ‘racist,’ police forces across the country have buried the evidence,” the report says.

The organization believes its analysis “will show that there are indeed prima facie reasons for considering Islamic doctrine to be at the root of this problem, both in Britain and in the Netherlands.” (Continue Reading.)

For more on Islamic grooming gangs in the UK, watch this:

Gavin Boby’s Law and Freedom Foundation will pursue claims for the betrayed girls against the authorities who let them down. Accountability is in short supply in a lefty world where a failure is almost always “systemic” and never anyone’s responsibility.
See also “Islam’s Sex Slaves in Britain”
http://libertygb.org.uk/v1/index.php/home/root/news-libertygb/5919-islam-s-sex-slaves-in-britain

Muslim rape gangs are following their prophet Muhammad who did this with Maria the Coptic.

It is part of Islamic teaching and if the founder of Islam did it, well he is the perfect example.

According to sharia law:
Muslims should engage in Taqiyya and lie to non-Muslims to advance Islam

Israel is the last post of the west, when it will be destroy Europe is next

the police , social services and even the goverment are all in collusion with these pakistani paedo gangs , they are even helping get rid of the evidence !