Apparently, following the recent apostasy of Paul Williams, our Muslim friend Yahya Snow had second thoughts about Islam and has apostatized too.

Nakdimon's link took me to an article by Paul Williams, in which Paul declares that Sam Shamoun and I were (partially) vindicated in one of our arguments about the Qur'an. You might think that, in response, a Muslim apologist like Yahya Snow would post a critique of Paul's claims. Not so. Surprisingly, Yahya decided to post a vicious attack against Shabir Ally and the position that the Bible has been corrupted: 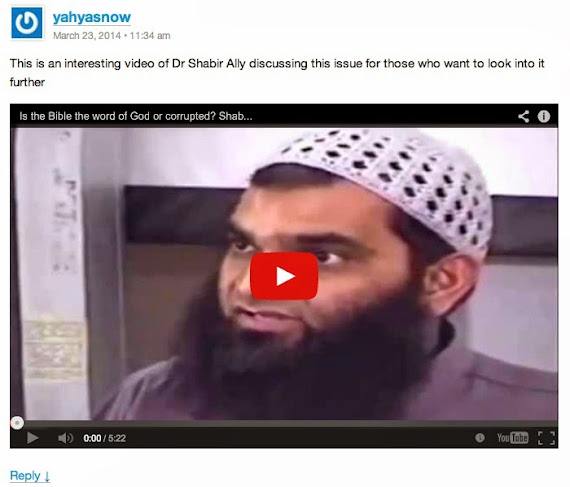 The video Yahya posted begins with some claims by Shabir Ally, but then goes on to refute Shabir. The video goes so far as to call Shabir stupid and deceptive, and even calls Allah a "worthless God." Watch it for yourself:


It's difficult to understand why a Muslim would post a video calling Shabir stupid and deceptive, let alone one that calls Allah "worthless." The video even recommends my YouTube channel at the end! So is Yahya telling us that he has been persuaded by our arguments, and that he has finally come to his senses and left Islam?

The only alternative would be that Yahya is so incredibly sloppy and superficial in his apologetics, that he carelessly posts attacks on his own position, because he's too lazy to actually examine what he's posting. And we couldn't believe that about the great Yahya Snow, could we?
Posted by David Wood at 4:21 PM

Now you know this means Yahya will have no other recourse than to post a picture of you (for the umpteenth time) satirizing his prophet who liked to dress up in his wife's clothes.

Maybe he'll accidentally post an attack on Muhammad instead!

I have read the quality of Yahya Snow's posts so I am not at all surprised that he doesn't pay attention to what he posts in propagation of Islam.

I am starting to think Yahya Snow is actually less well off than Ijaz? How is that possible?

Just posted this in Yahya's Blog. He will delete it soon.

Yahya great video you posted on Paul Williams site. Since the video you posted and call, "interesting" exposes "the stupidity, baseless claims, and deceptions of a Muslim like Shabir Ally". (4:44), and promotes such sites as Acts17, and Jesus or Mohamed. Does this mean you are going to be the next Muslim Apostate?

For a full description of the video check out www.answeringmuslims.com.

Can't wait to see your response, which I'm sure will simply be you publishing for the umpteenth time your favorite picture of David satirizing your prophet who liked to dress up in his child brides clothes

Reposted from a comment I posted on Yahya Snow's blog.

Guys lets have some pity on poor Yahya. He has had a rough week. First one of his hero's leaves Islam. Not because of anything Sam, David, Dr White or any other Christian apologist said. But because of another one of Yahya's heroes Ijaz Ahmed, convinced Paul Williams that Islam was not for him.

Then Ijaz Ahmed gets his teeth broken by Sam and James White on the Dividing line.

Then because of Ijaz, a debate between James White and another one of their Islamic Hero Shriek Awaal, gets published on youtube.

Because Sheik Awaal says in this debate that the bible was decided at the council of Nicaea, and since Ijaz has stated that Muslims who make this claim sound stupid. This means that Ijaz is forced to admit that Sheik Awaal in this debate sounded stupid.

And then to top it all off, Paul Williams via a "world renowned Islamic scholar", vindicates Sam and David.

Then Yahya posted a video on Paul Williams blog that he thought would vindicate his prophet and quran, only to find out that the video said another one of Yahya's heroes was STUPID and Deceptive.

Yup a bad week indeed. The only thing Yahya has is his favorite picture of David Wood in a bra imitating Mohamed.

So lets just leave Yahya and Ijaz alone to just gawk at the picture of David Wood in a bra. They really seem to like doing that, and thats about all they are good at.

@radical can you provide the post web page where you did it? i can;t find it or has he deleted it already

hahaha! good on them... fighting against each other.

We are getting somewhere aren't we? I look at Muslims these days and I think, hey buddy, how much do you know about the Quran? All thanks to this site. We want them to examine for themselves what their religion really is, what real Islam truly teaches. I keep praying. This could all come to a head. Could be very interesting.

I watched the video... Seriously?? Lol... Any person with common sense would think if this was posted by a Muslim, that that Muslim is no doubt NO LONGER a Muslim. Hallelujah!

I don't get it, why did he shoot his own foot? (oops sorry that's "right foot" for muslims).

Yahya supported ALL christians apologetics defense on the reliability of the bible. Infact reminding that abrogation does not work.

lvl 2, he also put that for that a scripture only to be understood in one language (arabic) is a failure.

is THIS really Yahya Snow? or impersonator? I hope acts17 can request confirmation that indeed that video was not made while drunk.

Hope it's not an imposter. Hope and pray Yahya comes to God through Jesus.

Yahya recently admitted in one of his comments that he didn't view the video. The funny thing is he says we should ignore his mistake and not treat our differences like this is all a game. Apparently throwing a video out there like he is rolling a pair of dice and hoping that it makes his point is not treating this like a game. He really thinks he is doing good, academically sound work. Absolutely incredible.

This is Christtheway24 I have always been straight forward and blunt, my concern is regarding Ijaz Ahmad, he seeks attention and is a waste of time. I was HIGHLY UPSET THAT Dr. James White actually wasted his time with that deceptive snake, he lies about David Wood, Sam Shamoun and others. All he wants to do is publicize HIS WEBISTE AND HIMSELF. Put him on the BLACKLIST, no Christians should debate such a snake. Since he wants to continue in his deception. He is nothing but a brat kid that wants to be NOTICED

Let us humbly and fervently pray on behalf of Yahya Snow.

Here is an answer https://essaydragon.com/blog/why-michigan-essay-guide to all your prayers!