How Muhammad Became the Final Prophet

The following people claimed to be prophets at the same time Muhammad was claiming to be a prophet: 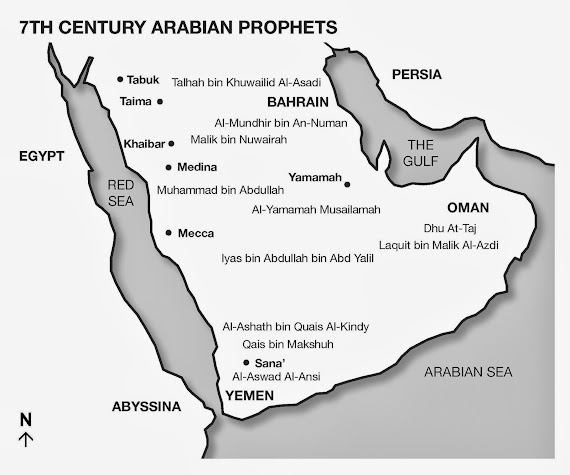 These prophets were monotheists and some were known to have their own words from God which they taught to their followers. This is the Arabian context in which Muhammad was doing his activity; he was not alone.

When some of the Arabian tribes accepted Islam they accepted Muhammad as a prophet along with their own prophet. They had at least two prophets. Muhammad was certainly not viewed as the final prophet by these early Muslims.

How did the belief that Muhammad was the final prophet become the orthodox view?


(Immediately after the death of Muhammad) The situation that Abu Bakr faced on assuming the caliphate was very grim. Many tribes apostatised from Islam and refused to pay Zakat. Many false prophets rose throughout the length and breadth of Arabia, and many people offered allegiance to them. The argument that weighed with them was that a living prophet was to be preferred to one who was dead. (Prof. Masud ul Hasan, History of Islam, 2002, vol. 1, p. 97)

And so we see that after Muhammad’s death these other prophets continued their activity. Abu Bakr’s response to this situation was to declare war on these Muslims and unify them around Muhammad alone. To the north of Medina was the tribe of Asad. They followed their prophet Talhah. Muhammad’s followers marched against them and defeated them at Buzakha. The tribe of Hanifa was led by the prophet Musailamah. Muhammad’s followers fought hard against this tribe and finally killed Musailamah. In Oman Laquit b Malik was the prophet. An army was sent against him. Laquit and ten thousand of his followers were killed. In Yemen there was a prophet called Aswad Ansi. He had a large following. Muhammad’s army defeated them and killed Aswad.

This is how Muhammad became the final prophet; his close companions killed all the other prophets and forced their version of Islam upon these Arab tribes. Muhammad’s Qur’an was to be preserved but any Qur’an-like material from these other prophets was not preserved.

1. It was not universally acknowledged among the early Muslims that Muhammad was the final prophet. This belief took time to be established and was enforced violently on the early Islamic community. If these different early Islamic communities had been allowed to continue to follow their own prophet then their belief that Muhammad was not the final prophet would continue today and Islam would look very different.

3. The killing of these prophets and stopping the transmission of any Qur’an-like material they may have had destroyed important evidence for the context of Muhammad’s Qur’an. How did what Muhammad recite relate to what these other prophets recited? Was there common material between them? Did any of their material get included in Muhammad’s Qur’an or was Muhammad's completely different to them? It is an assumption to say there was no connection between them and Muhammad. To claim that what Muhammad recited was completely unique is an argument from silence, a silence created by killing these prophets and their words. Therefore when we think about the history of the Qur’an we need to consider this context. Even if we cannot answer certain questions about these prophets and their words we can at least know that modern Islamic claims are just assumptions and arguments from silence.

4. “How Muhammad became the final prophet” would be a good title for a book and there is plenty of material in the Islamic sources to work with. I say this because there are a few books with titles like “How Jesus Became God” and Muslims seem to like these books. However, Muslims cannot say that because early Christians wrestled to understand the divinity of Jesus this means his divinity is a later invention. Would Muslims say the same about Muhammad being the final prophet? Some issues take a while to sort out. The main issue for Christians and Muslims in this area is to make sure we learn our history properly and not rely on cliches and exaggeration.
Posted by Samuel Green at 10:18 PM

Email ThisBlogThis!Share to TwitterShare to FacebookShare to Pinterest
Labels: Muhammad

Thanks Samuel for this very useful article.

The fact that people struggle to know God does not mean there is no God, certainly the divinity of Christ is a very deep spiritual truth that requires humble understanding of the scriptures as Christ demonstrated on the cross. It is only natural that it takes time for people to accept the truth of Christ awesome humility. What is very beautiful is that no one was threatened or killed to defend the Divine Christ. It has been through free will and to this day there are heretics within.

Thanks for confirming again and again that Muhammad peace be upon him is true prophet of God....
How?
You just confirmed what Quran says: "This day have I perfected your religion for you, completed my favor upon you, and have chosen for you Islam as your religion".
Still not satisfied?
So as you mentioned above that no any tribe or false prophets were able to defeat Islam after Muhammad peace be upon him. It's one of the signs of Islam being true religion and its growing day by day in spite of all phobias against it. There were alot of people came out to claim is as prophet but they failed. I hope u going to post it as u didn't previously

@kurshid kurbanov so then according to you the criteria of truth is not being defeated and growing? So since Christianity has never been defeated and it's growing day by day that means Christianity is also true

@Theodros I can't be agree with you upon this issue. Today's Christian world labelled the name of Christianity most of them either atheists or superstitious.

What the hell. Buddhism is also "undefeated" and "growing day by day". So is Hinduism. So are countless other religions.

Samuel, impressive list of others claiming to be a prophet. I knew about Musailama but not so many others. Another debunking of the Muslim claim that Muhammad's so-called call to monotheism was unique among the Arab polytheists.

What about the female Arab
prophet(ess) Sijah? I understand she had a sizeable following among her own people. I get this from Ali Sina's book "Understanding Muhammad and Muslims", p. 25.

#RMuhammad
Thanks for the comments. I do not have that book. Are you able to send me a quote or scan?

THIS ARTICLE IS PURE WRONG.....BECAUSE IN KORAN NUMEROUS TIMES IT HAS BEEN TOLD THAT HE IS THE LAST PROPHET....BUT U DIDNT CARE TO ADD IT...BECAUSE YOU ARE TOO PERVERT

Round and round you go. Here is another circle for you.

You cannot prove something, by assuming your premise is true.
There needs to be EXTERNAL proofs, hence the claims of "scientific accuracy" in the Koran or of the inimitable "beauty of the verses" which is as subjective a fallacy as you can get.

Bottom line - you cannot prove Muhammad's prophethood by quoting the Koran, because that presupposes Muhammad WAS a true prophet.