And that's the reason for the increase in molestation problems. If men believe that women deserve to be raped, fondled, harassed, etc., then men will feel justified in raping, fondling, and harassing women. 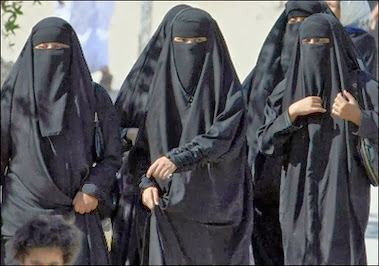 Emirates 24/7—Saudi men believe women are to blame for the rising cases involving molestation of females on the grounds they are seduced by women’s excessive make up.

The findings were included in a survey conducted by the Riyadh-based King Abdul Aziz Centre for National Dialogue and involved 992 males and females.

The survey, carried by Saudi newspapers, found that 86.5 per cent of the men polled believe that women’s exaggeration in wearing make-up is the main cause of the rise in molestation cases in public places in the conservative Gulf Kingdom.

About 80 per cent of the total persons polled believe lack of deterrent penalties and the absence of specific anti-molestation laws are also to blame for the phenomenon.

The report said 91 per cent of the respondents, all aged above 19, believe another key factor is the “poor religious sentiment” while nearly 75 per cent said the problem is caused by lack of awareness campaigns and warning notices at most public places. (Source)


Click here to learn about women in Islam.
Posted by David Wood at 2:32 PM

Yeah, nothing is more seductive than dressing up like a female ninja in 110 degree weather.
Those shameless hussies are just askin' for trouble.

From the article: “Saudi men believe women are to blame for the rising cases involving molestation of females on the grounds they are seduced by women’s excessive make up.”

But in reality, it is the already sinful, corrupt condition of the men that is the problem.

“For from within, out of the heart of men, proceed evil thoughts, adulteries, fornications, murders, thefts, covetousness, wickedness, deceit, licentiousness, an evil eye, blasphemy, pride, foolishness. All these things come from within and defile a man.” Mark 7:21-23

That the women are forced to get around in a small tent is actually a witness against the men’s own corrupt natures, and for the men to blame their own weaknesses on the women is just intellectual and spiritual cowardice.

The solution is simple. Instead of the Niqab which allows men to see the womans eyes, Saudi should enforce the Burka

David,
in other news, u might want to see this.
http://www.scotsman.com/news/uk/burger-king-recalls-sacrilegious-desserts-1-1096308