Reza Aslan Spoofs Nativity Scene to Sell Copies of "Zealot: The Life and Times of Jesus of Nazareth"

Reza Aslan has a new video ad for his recent book, Zealot: The Life and Times of Jesus of Nazareth. The video depicts a "wise woman" showing up shortly after the birth of Jesus, offering Joseph and Mary "the greatest Christmas gift ever": a copy of Zealot. Here's the ad:


If this video had been made by someone who wasn't a complete hypocrite, I wouldn't have a problem with it. Reza Aslan, however, routinely condemns anyone who dares offend Muslims or criticize Islam. Indeed, he blames critics of jihad for violence, even when the violence was committed by Muslims. For instance, Shaima Alawadi was honor-killed by her own husband. Yet Reza blamed Robert Spencer and Pamela Geller for the murder (based on the husband's planted "Islamophobic" note telling Alawadi to "Go back to your country, you terrorist"): 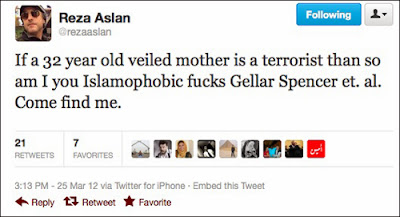 Not exactly what we would expect from a self-proclaimed internationally acclaimed "scholar" of religions!

What about all those Bible passages in which Jesus commands his followers to turn the other cheek, to love their enemies, to pray for their persecutors, etc.? According to Aslan, these passages were either fabricated or massively distorted by later Christians. The "real" Jesus wanted only bloodshed.

Years ago, Aslan condemned the Jyllands-Posten for reinforcing stereotypes and promoting hatred. He concluded:

And that is why as a Muslim American I am enraged by the publication of these cartoons. Not because they offend my prophet or my religion, but because they fly in the face of the tireless efforts of so many civic and religious leaders—both Muslim and non-Muslim—to promote unity and assimilation rather than hatred and discord; because they play into the hands of those who preach extremism; because they are fodder for the clash-of-civilizations mentality that pits East against West. For all of that I blame Jyllands-Posten. We in the West want Muslim leaders to condemn the racial and religious prejudices that are so widespread in the Muslim world. Let us lead by example. (Source)


And yet, despite his calls for tolerance and sensitivity, Aslan has no problem telling Christians that Jesus was a wannabe terrorist, that Christianity is based on myths and deception, and that Zealot is the "greatest Christmas gift ever." Moreover, Aslan finds it amusing to spoof the Nativity scene (during the Christmas season, no less) in order to sell a book that treats the Nativity story as a fiction.

Again, I wouldn't have a problem with the video if it were coming from someone who was a bit more consistent. But facts are facts. Aslan certainly didn't make a video about Muhammad's birth in an effort to sell copies of his book No God but God. Indeed, if Robert Spencer had made a video depicting the birth of Muhammad in order to sell copies of The Truth about Muhammad, Aslan would have called him a bigot, a hate-monger, and an Islamophobe (following the inevitable international bloody riots).

Why the double-standards? Because Aslan knows he can get away with it. He knows the media will fawn all over him, even as he desperately tries to make Jesus sound like Muhammad and Muhammad sound like Jesus. And he knows that, no matter how much he insults Christians or their beliefs about Jesus, no Christians are coming to kill him (which, according to Aslan, makes them poor followers of their violent Lord).
Posted by David Wood at 10:53 AM

Disgusting, crass, annoying, demeaning, shrill, out of touch, ham-handed, blasphemous, hypocritical, wrong and painful to watch and listen to, that was. Yuck!

Reza debated a New Testament scholar on Preimier Radio. I havent listened to it yet but might be worth a review

I noticed the book cover has a picture of what may seem to be Jesus, so does this scumbag support pictures of the filthy pedophile pig Muhammad also?

wise women told them to read the book & they said they cant read? well wise women should have pressed her hard 3 times 7 say iqraa...she would have become messenger!

Readers of this book are likely to be 90 per cent Muslim. Aslan is hardly influential beyond his front door.

Aslan's readers are other Muslims. His academic influence is less than Honey Boo-Boo's.

I strongly blame the liberal media. He is a BUFFOON in deed as I wrote in my last comment in this blog. Where is CAIR? This confused man will look for CHRIST at the end of this. This is a direct attack to my HEART of hearts.
Please Dr. David I wish you could come with a video during to expose him and CAIR for their silence. Even talk about during ABN show. He will not ride my HEART in order to become rich.
He suffers from Constant Inconsistency Syndrome (CIS).
By the way Br. Sam Shamoun I read your articles even when it is long. In fact when it is long I get excited because I know you usual cover all the corners with facts and evidences. So please do not change the way you pass information to us. Thank you and keep it up.

GOD BLESS all of you

There is a HuffPo article posted recently that bills Aslan as a 'Biblical scholar': http://www.huffingtonpost.com/2013/12/14/reza-aslan-birth-of-jesus_n_4441762.html?utm_hp_ref=tw

When I posted a comment to inform other readers that Biblical studies was not Aslan's expertise and that his recent book "Zealot" was not an academic treatise, but a book clearly aimed at a lay audience, it was posted for a few days and then suddenly disappeared. Mind you that my post was polite and not intended as ad hominem, but to merely correct factual errors in the article and amongst the comments.

Truth once again gets censored by leftist nitwits, who have no shame in deceiving others.

"....an enormous red dragon with seven heads and ten horns and seven crowns on its heads. Its tail swept a third of the stars out of the sky and flung them to the earth." - Revelation 12:3-4

We Christians have NOTHING to fear as we outnumber Satan by 2:1! Reza Aslan sells lies to naive leftists AND naive muslims, who are running scared because their own books clearly expose islam for the depraved death cult that it really is, so their only option is to rewrite history.

"You are of your father the devil, and you want to do the desires of your father. He was a murderer from the beginning, and does not stand in the truth because there is no truth in him. Whenever he speaks a lie, he speaks from his own nature, for he is a liar and the father of lies." - John 8:44

Utterly disgusting. Reza is clearly an agent of evil.

The vast experience we have in offering nursing writing services has enabled scores of students to score high grades in their assignment since we are known for offering the purchase term paper.